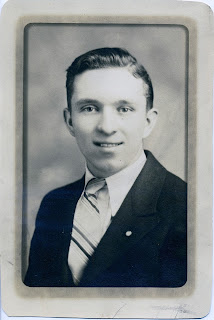 Last month my father, John Hovanic, would have been 105 years old. The above picture was his high school graduation picture from 1930.

Dad was born in the coal mining town of Crabtree, Pennsylvania, the third child in a family of eleven children. There would have been thirteen, but twins died a few days after their birth. His father was foreman of the mining stable. They lived in a patch house owned by the mining company. They had the bigger of the two sides because of their larger family. Like others in the small town, they shopped at the company store and what they bought was taken out of the miners’ pay checks.  One time my grandfather was reprimanded by the mining superintendent because my grandmother was not buying enough in the company store. She grew a large vegetable garden, did a lot of canning, and took a bus into a neighboring town to shop in a grocery store with far better prices than that offered by the company store. I don’t remember if it stopped her trips or not. I know at a later date, my grandfather threw down his keys and quit his job during the Depression because the mining superintendent wanted him to work the mine ponies longer hours and cut back on their feed. I have a feeling it was also because he didn’t want any of his sons to end up working in the mine.

Because Dad was a good student, after his graduation from high school, two bachelor uncles, Uncle Charley and Uncle Emmitt Radesky, and their unmarried sister, Katherine, from Ohio paid for a year of college. Dad had lived with them for several years during his high school years so he could attend a larger and better school. Since it was the Depression, Dad quit college after the first year to help his family rather than continue, but he never stopped learning. He was one of most widely read, intelligent and knowledgeable people I’ve ever met. All of his children got their love of books and reading from him.

After Grandpa Hovanic quit the mining job, they came to Ohio where Grandma’s brothers and sister lent them money to buy a small farm (the same ones who gave Dad a year of college). Even though it was still the Depression, Grandpa, my Dad and two of his brothers got jobs in a factory and paid back the loan.  He didn’t have to go to war because he had two children then, and the factory was making ammunition for the war effort. Dad worked his way up to foreman, and then to an office job as a purchasing agent and stayed there until he retired. Although he hadn’t been a union man for years, he still believed staunchly in unions.

A few years after moving to Ohio, my dad met a shy young woman and fell in love with her. They met at an outside party in the summer where there was a bonfire and young people sitting around it. My dad was playing a guitar and singing. She didn’t hear from him again until right after Christmas when he asked her to go out New Year’s Eve. She told him she only would if he brought a date for her best friend. They didn’t marry until the following November. Her father, a farmer who’d inherited enough money so he didn’t have to farm too much, objected. He opposed the marriage because my father was a foreigner. (Dad’s father had come over from Slovakia as an eight year old boy.) And just as bad as that, my father was a Catholic, (My Grandfather rarely if ever went to church), a Democrat, a union man and carried a lunch pail to work. In spite of Grandpa Jones’ objections, John and Elnora eloped and soon started a family. I was their first child followed by a brother, three sisters and much later another brother. When I was about five years old, they married in the Catholic Church, and mom became a good Catholic.
My father always treated Grandpa Jones with respect and helped him around the farm when needed, and Grandpa soon returned that respect. He gave my mom and dad a lot next to the farm land across the road from the farmhouse and barns, at the same time he gave one to his oldest son and daughter-in-law across the road from the house my father built for us on the lot given them.

Dad was an excellent father. He was firm, loving and had a good sense of humor. He read to us and sang songs to us, and he taught and showed us by example what was important; honesty and respect for others. Years and years before the Civil Rights Movement, my dad preached equality, that all people were equal. He was so honest that to this day, I still feel guilty about the marble I put in my pocket and took home from a cousin’s house.

I could fill pages and pages with what a great husband, father and person he was, but I’m going to give one example. My Grandma Jones was probably one of the world’s worse cooks. At a large extended family reunion, she took boiled chicken. Picture grayish, uncoated, unseasoned,
boiled chicken on a platter next to dish after dish of mouth-watering golden-brown fried chicken brought by others. My father didn’t care much for chicken in any form after years and years of his father raising chickens and that being the meat most often cooked. But he took a helping of Grandma Jones’ chicken and ate it. I think he was the only one who did. That’s the kind of man he was - unfailingly kind and caring.

Dad was a listener, too. When we’d go on camping vacation trips, he’d disappear for a while and then came back with wonderful stories about people he’d met; people who opened up to his genuine interest and told them their story. Stories like the one he’d heard from an old man on the dock of a river in West Virginia. The old man had worked hard to send his first child to college, and after that each child helped the next one until all his nine children had a college education.

In the summers, he would load up his Buick with us, our cousins and the neighbor kids and take us swimming at Eagle Creek or another place north of us a spring fed creek and quite cold. Almost every Sunday after church from spring through fall, with my mom’s sister and her family, we went on picnics all over the place; Lake Erie, Warner’s Hollow, amusement parks, and numerous parks in driving distance in both Ohio and Pennsylvania. Once because we lost our way and everyone was hungry, we ate our picnic beside a stream in a cow pasture with the cows watching us. Fortunately there were no bulls.

For years and years when I’d meet someone who knew my father, their faces would light up with smiles as they would tell me what a special man he was and something they’d always remember about him. In fact, I got my first job after graduating during a down time in the economy because of him. After several months of pounding the streets looking, a woman interviewed me who had once danced with him at an office party where her husband was a vice-president. She had such fond memories of meeting him that she hired his shy and awkward daughter. He had a way about him – not flirtatious, just a nice guy with a nice smile who liked people. 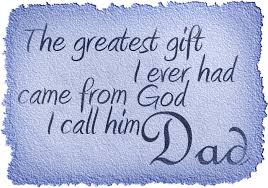 It’s been over twenty-five years since Dad died, and my siblings and I still miss him. He was the scaffolding on which each of us built our lives.

What memories do you have of your father?
Posted by Gloria Alden at 12:00 AM

Email ThisBlogThis!Share to TwitterShare to FacebookShare to Pinterest
Labels: My Father

What a lovely tribute!

My early childhood memories all seem to be observed from my perch on my father's shoulders. It seems I spent a great deal of time traveling up there, watched parades from that vantage point, saw baseball games, town streets, shopped the newly built malls, and in a family of great walkers, finished most childhood hikes that way. Thank you, Gloria, for bringing that all back.

I maintain that we can understand the measure of a person by looking at their grandchildren. The extra generation lets us see what ideas and practices the person’s children understood were most important so that they instilled those behaviors in their children.

Kait, those are wonderful memories. I don't remember my father doing that. Maybe it's because my brother was born so soon after I was and there were more little ones to follow. I do remember him picking me up to look at his mother in her coffin in the parlor of their home in front of the piano when I was five years old.

Jim, I never thought of that, but I realize that my children and all my nieces and nephews are good people who he would be proud of if he were still alive.

I too could go on for pages about my dad. He and my mom modeled sacrifice, faith, and patriotism for the seven of us as we grew up between Eisenhower and Reagan in Florida. They let us develop our own ideas but made it clear what their beliefs were as well. We could not have been more fortunate. I love the smell of motor oil and the feel of red clay of a baseball field because of my dad. He owned a garage and spent his limited free time coaching and umpiring at the local little league. I remember him in my writing by including a car repair shop bearing his name in the small town setting and by having my main character drive a 1970 El Camino SS--a car he drove when I was a child.

Gloria, what a wonderful tribute to your dad. My dad died in 1996, 21 years ago, at the age of 90. A farmer's son with six siblings who watched his father check the sky daily for rain, he decided early that whatever he did, it wouldn't depend on the weather. He went to UT-Austin undergrad and UT Law School and practiced during the Depression. Nobody needed lawyers much then. He received chickens, eggs and free laundry from the ones who did. He finally bought a company and used his legal knowledge to help it grow. My mother worked by his side. They were wise, wonderful people who taught me a lot. Dad had black curly hair and blue eyes, a great sense of humor, and everybody liked him. I think Detective Sam in my Aggie Mundeen series is based on him and my husband. One woman said, "Shoot. If Aggie wasn't in the picture, I'd go after Sam myself." Good choice.
Thanks for reminding us to be grateful for the wonderful men who shaped our lives.

Liz, what a wonderful tribute to your father. You had just one more sibling than I had, so it some ways we shared a lot of the same memories. Like you, I had a good mother, too.

Nancy, it sounds like you had a wonderful father and mother, too. We were lucky, weren't we. It's nice you based Detective Sam on both your father and your husband. It tells me both are
special men.

I remember my father saying about his children, "I always wanted them to think for themselves, but I never realized they would come to so many different conclusions. And none of them agree with me."

KM, that's funny. He sounds like someone with a good sense of humor.