It's an Honor to be Nominated by Carla Damron

How many times have we heard this when watching the Oscars or some other awards show? How many actresses said this when they realized they were up against Meryl Streep or Cate Blanchett? How many recording artists uttered this sentence when they learned Beyonce or Adele were also nominated?

Well, now it’s my turn. It’s an honor to be nominated for the Women’s Fiction Writers Association Star Award. If you don’t know I was nominated, you must have had your window closed on May 17 when I received the phone call and screamed so loud it could be heard across the Atlantic. This award isn’t as well known or esteemed as the American Book Award or the Pulitzer, but it’s special to me because nominees are selected by fellow fiction writers. Our peers. People who know how blasted hard it is to write a novel.
The other nominees for the Star Award are the fabulous Barbara Claypole White, who wrote Echoes of Family (I met Barbara when we appeared together on a panel several years ago) and. Amy Impellizzeri, author of The Secrets of Worry Dolls. I haven’t finished reading these novels yet but I plan to. So far, I’d say I’m in terrific company.

What I love about writers: the three of us feel less like competitors than we do members of a tiny, special club. When I mention The Stone Necklace as a nominee, I make sure include the other titles. We’ve all three done this in social media posts, celebrating all of us instead of just ourselves. My Twitter life has expanded as a result. 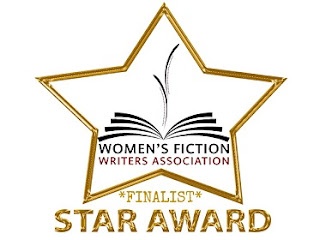 No, I haven’t had a tattoo made. Yet.

Because I live in South Carolina, and apparently May 17 was a very slow news day, I got excellent publicity in our local newspapers. My hometown publication, The Sumter Daily Item, had me on its front page, complete with mug shot, which made my 88-year old cantankerous mother very happy. The State online reran its link to the video they shot last year:

Will the nomination help book sales? I sure hope so. I still haven’t captured the holy grail of “second printing.” If that ever happens, I may need a second tattoo.

The final round of judging takes place this summer, with winner announced in September. I don’t mind the delay. I want to savor being a nominee, so when September comes, and Meryl Streep (Claypole) or Cate Blanchett (Impellizzeri) wins, I can smile and clap like the most gracious Oscar non-winner. I will be thrilled for them. And yes, if I’m honest, just a teeny-weeny bit jealous.

But if I don’t win, it’s one less tattoo I’ll need.

Have you been honored with a nomination of some kind? Did you yell out the window? Did it help promote your writing? Did you get a tattoo?
Posted by carla at 12:09 PM

Congratulations, Carla. The nomination lasts forever, regardless of whether one wins or not, and they can never take it away from you. (And those stickers of yours should be appearing on the front cover of your books!)

Congratulations. As jim said, it's an accomplishment that you will always be able to point to as evidence that people like what you write.

Carla, because I read your book, I know how much you deserved that nomination, and I hope you win the award. I haven't read the other books, but to me yours is a winner.

When I was teaching, I won teacher of the year for elementary teachers in Portage County. Yes, I was excited, but also embarrassed because it was a small school with only two teachers for each grade and I didn't feel like I was anymore deserving than the other teachers. I was even more embarrassed when the principal put up a big banner congratulating me. There was a banquet for all the teacher from college, high school, junior high and down to elementary level. It was the first time I ever spoke on a microphone, and found out later no one could hear me because the person who spoke before me was very much taller than I am, and I never thought to lower the microphone.

The nomination is a big step forward in and of itself.

Winning is even better, of course.

Thanks, y'all. Gloria, you DID deserve to win! And to be heard.

Congratulations!!! And great coverage too!