What Did You Say?

A local monthly newspaper, the Emmitsburg News-Journal, has a feature called “One Hundred Years Ago This Month,” with snips of information from newspaper of the past. I always read it, and I’m often amused 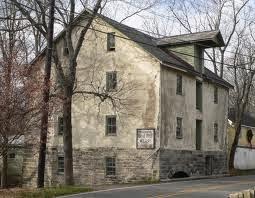 by the “objective” reporting, which has many references to the superiority of horse-drawn vehicles over automobiles, and the folly of considering permitting women the right to vote.

This month’s had a great example of misused language. You know, the statements where you can tell what the writer meant, but it didn’t come out quite right.

“Boyle’s Brothers of the Emmitsburg Grain Elevator Company have installed a 10 HP Westinghouse electric motor and are positioned to do grinding of all clients at short notice.”

I wonder how much repeat business they get from clients who have been ground, short notice or otherwise?
It made me stop to think about other instances where the wording is just not quite right. I’m not native to this area, but I’ve lived here long enough that statements like, “Throw the sheep over the fence some hay” don’t

strike me as peculiar any more, although I do keep them out of my writing. Anyone remember Patti Page's song, “Throw Mama from the Train a Kiss, a Kiss”?

One of the saddest things I’ve ever heard was a student who was explaining why she had been absent so much one school year. “They discovered I have sick as hell anemia.” And that does just about sum up sickle cell anemia.

Another sad misunderstanding was the grandmother who told me that the doctor told them that her grandson was artistic, so she’d bought him crayons and paints and paper, but she couldn’t get him to settle down and draw anything.

And then there’s the co-worker who didn’t think anyone should go to a hospital named after a poison. It took a few minutes to realize it was Sinai Hospital he was talking about, not Cyanide Hospital.

It’s hard to forget about the classic London Times article about Queen Victoria dedicating a new bridge over the Thames, although one suspects it was typo. After the ceremonies, Her Majesty passed over the bridge, but the paper unfortunately substituted an “i” for the “a” in passed. One assumes this was an occasion when “We are not amused.”

Perhaps my favorite is the church bulletin that announced that “Ladies of the Altar Society have cast off clothing of every description, and are available for viewing in the church basement on Friday and Saturday from ten to two.”

Today’s digital age adds new possibilities to the confusion. Gary Weinstein, in the Washington Post Magazine, wrote about a man named Dick Cooper. The anti-pornography program on his computer at work kept changing his name to “Thingy Cooper.”

What examples do you have of statements that just didn't come out right, either your own or someone else's?
Posted by KM Rockwood at 12:00 AM

I had a friend at work who would collect all sorts of malapropisms and then when his group got together for a holiday dinner he would regale the audience with them – never identifying the miscreant.

Love this blog, KM. We have a weekly column 99 years ago today, although why they chose 99 instead of 100, I have no idea. I find much of it amusing, too. I can't think of anything to contribute right now.

Fun blog, KM! A friend's grandmother said her doctor had diagnosed her with very close veins. Everyone was puzzled until we realized she meant varicose veins. But I think very close veins is a good description of the problem.

Jim, that sounds like a fun activity, especially if the sources aren't disclosed!

Carla, I love that one.

Gloria, news from 99 or 100 years ago serves to remind me that while the specifics may differ, the more things change, the more they remain the same.

Kara, Very Close Veins are indeed a good description of the condition.

What fun! I used to work for a guy who owned a restaurant and swore women were governed by the phrases of the moon. I HAD to use that for a character, so it's now in print.

Oh, Kaye, phrases of the moon! Love it.
This is fun, KM. The first thing that came to my mind was something my daughter said when she was four. We'd just moved and when a lady asked her where we lived now, she said "Washing Machine, DC."

I know what you mean, Kaye. Sometimes you just have to incorporate someone into your writing.

Washing Machine, D.C. I love that one!

One of my favorites was a sign on a door that read: Do not open this door. So..why was the door put in?

There was a great example of why serial commas were necessary. Unfortunately, I can't think of it right now. Busy day.

One of my favorites, Warren, is the multi-page forms that say, "This page is intentionally left blank." Well, if it says that, it isn't blank, is it?

Let us know when you remember the story about commas, E.B. My favorite one in the entire fiasco over the title to the chilren's book about pandas--it came out as Eats, Shoots and Leaves, entirely different in meaning than the intended Eats Shoots and Leaves.

One recent comma omission is: Let's eat Grandma. (Rather than: Let's eat, Grandma.) Being a grandma, this hits close to home!

LOL--Kaye. Yes, thanks for providing the example I lacked.