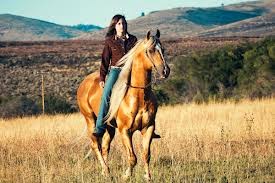 Oh, give me a home, where the buffalo roam,
and the deer and the antelope play.
Where seldom is heard a discouraging word,
and the skies are not cloudy all day.

This past Sunday night when I was driving home after having had dinner with two sisters, a sister-in-law and a nephew, the program on my NPR station was folk music with that night’s theme of “Boots and Saddles” featuring cowboy songs. Some were even old recordings from the 1930s. As I sang along with those I knew like Gene Autry’s “Back in the Saddle Again,” I felt nostalgia from my childhood years when more than anything else I wanted to live on a ranch in the West with lots and lots of horses and be a cowgirl.

We used to go to Saturday matinees featuring westerns at the three or four theaters then in the town closest to us. Like Willie Nelson, who sings “My Heroes have always been Cowboys.” I loved western movies with cowboys like Gene Autry and The Lone Ranger, but the cowboy I loved most was Roy Rogers. My cousin, who lived across the street from me, also liked him. Dolores and I shared a comic book with his picture on the cover and we’d take turns sleeping with it under our pillow so we would dream of him. I don’t think that ever actually worked.

For years we galloped on our imaginary horses around our grandparents’ farm leaping over logs and ditches. One of my horses was named Wildfire and another was Lightning. I don’t remember the names of her horses. I read every horse book I could get my hands on; books like Thunderhead, My Friend Flicka, The Red Pony and many more whose titles I can’t remember now. When I got older, I started reading Zane Grey. Some time in my teens, I gave up that dream – not the dream of having a horse someday, but the dream of being a cowgirl on a ranch with hundreds of horses out west. I’m not sure when I quit galloping everywhere while hitting my thigh to make my imaginary horses go faster. I’m guessing it was before I hit my teen years.

So for a while during that hour long drive home, I sang the cowboy songs whose words I remembered like “The Streets of Laredo” and even yodeled to “The Cattle Call” – not something I would do if I weren’t traveling alone.

The next day my sister called to see if I’d enjoyed the evening and the food she’d fixed. I told her how much I did and how perfect everything was. Then I mentioned I was in the middle of writing a blog for this week and what it was about. Elaine started laughing and said she and Suzanne, two years younger than her, and our cousin, Linda, the same age as Elaine, did the same thing. She said Suzanne’s horse was Volcano, Linda’s was Tornado, and since they took all the good names, she came up with Erosion. I’m still laughing over that. She’d read and enjoyed the same books I did. I had no idea they did the same things as our cousin Dolores and I did, but then Elaine’s seven years younger than I am and my other sister is nine years younger so by that time I was a teenager and well beyond those childish activities.

What childhood dreams did you have?
Posted by Gloria Alden at 12:00 AM

I remember the "King of the Cowboys." He and Dale used to sing Happy Trails to You at the end of their TV show. I wanted to be a cowboy. Thanks for bringing back the memories.

I think those of us who grew up when there were dozens of cowboy shows on television all dreamed of riding horses in the Wild West. I think my favorite cowboy was Gene Autry, but I would have liked to have been Dale Evans or Annie Oakley. There was also Hoppalong Cassidy and the Cisco Kid.

One of the reasons I love living in Tucson is that there's still a lot of cowboy around here. We still have open range and there are times when you have to wait for the cattle to get off the road. Every February there's the Fiesta de los Vaqueros, the Tucson Rodeo, and, just west of town, we have Old Tucson Studios where the likes of John Wayne filmed some of those great movies you saw.

As far as other childhood dreams, I'm fortunate enough to now be retired and living one of them--being a writer.

Childhood dreams are wonderful because anything is possible. I wanted to be a movie director when I was in elementary school probably because many of our neighbors were in the entertainment business. In high school I wanted to be a photojournalist for National Geographic. I still enjoy taking photos and writing stories so perhaps I'm living out my childhood dreams in some form.

Your cousin was very creative naming her "horse" Erosion.

Warren, I loved hearing Roy Rogers and Dale Evans singing "Happy Trails to You." Maybe if we had followed those early dreams, we would have met somewhere out on the range. :-)

Elise, how nice that you're able to live your dream. One of first things I wanted to be before I wanted to be a cowgirl, was a teacher and a mother. I fulfilled that even though I never became a cowgirl.

Sarah, one of my uncles wanted a pony in the worst way, and then on Christmas morning he got up to find horse droppings under the Christmas tree with a frayed rope and his father said the pony must have gotten away.


Kara, sometimes our dreams just take a different direction. A photojournalist for National Geographic would have been exciting, but then there's a lot of danger in that field anymore.

Actually, it was my sister, who is a very bright and witty person which is why it made me laugh so much. She told me it was because she liked big words.

Erosion! I love it!
I remember playing Dale and Roy with my sister - she got to be Roy...typical older sister. I was always the second banana.
I wanted to be Emma Peel, the stylish detective of The Avengers. Maybe that's why I write about....a stylish detective.

Shari, I don't remember ever watching that show, but then I'm much older than you. Being a stylish detective is much more attractive than being a cowgirl.

I loved Roy Rogers and Dale Evans, but most of all, Trigger. I wanted a palomino like Trigger so badly. One of the things I really liked was that Dale Evans stayed her own woman, even though they were married. I remember the brouhaha when Eddy Fisher left Debbie Reynolds for Elizabeth Taylor. I was just a kid and said with scorn, "Dale Evens wouldn't cry like Debbie. She'd lasso him with her rope and hogtie him."

Linda, I liked that about her, too,
but all that with Eddie Fisher and Debbie Reynolds happened when I was already, but I remember really admiring Dale Evans when I was an adult.

Oh yes, I was going to be a cowboy when I was small. I even had a outfit with vest and chaps when I was five or so. But I gave it up quickly, although I did enjoy westerns: Roy & Dale, of course, and the Lone Ranger and Tonto, Hopalong Cassidy – but Cisco Kid, he was a friend of mine.

We didn't have a TV when I was young, but some of the neighbors did, and we played Cowboys quite a bit. My sturdy steed was a battered tricycle named Tornado, which is marginally better than Erosion. Both are forces of nature. Why did we use those storm names? I think Dale Evans' horse was named Buttermilk. We were inclined to think that Roy and Dale weren't really married--how could they be, if they didn't share a last name?

My inlaws live in Cheyenne, Wy. They have a big rodeo every year. My father-in-law once asked a cowboy why they all wore baseball caps as opposed to cowboy hats. He said they didn't want to be mistaken for truck drivers.

Jim, I wonder if any kid wants to be a cowboy anymore. Even when I was teaching, the kids never wore cowboy or cowgirl costumes at Halloween.

KM, we didn't get a TV until I was 15, but my grandparents did a few years earlier and since we lived by them, many of the Westerns we watched were on their TV. I don't think I realized Roy Rogers and Dale Evans were married, either. I don't remember them ever even kissing in the movies, either. That's funny about the guys wearing ball caps.