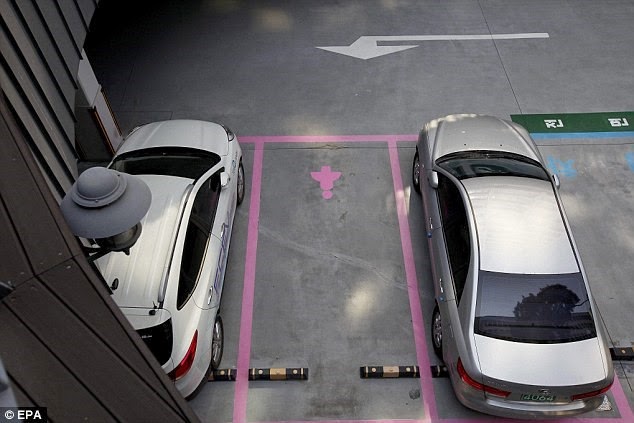 Recently, I read in a MailOnline.com article that Seoul, South Korea has created women only parking spaces dubbed “she-spots”. They are wider and longer than normal parking spots with good lighting and conveniently located near shopping center elevators and escalators. However, they are outlined in a pink color reminiscent of Pepto-Bismol® with a skirted female logo painted in the spot for further clarification. I’m unclear if men are ticketed (or just ridiculed) if they park in a “she-spot” instead of a “he-spot” outlined in blue.


Officials claim that this is part of a plan to make the capital more female-friendly and not a reflection on the way females drive. (Hmmm) They are also adding 7,000 female only toilets (presumably not in the parking spaces) and resurfacing pedestrian walkways with spongy material to make it easier to walk in heels.


In 2012, the German town of Triberg designated easy parking spots for women. The mayor said that it wasn’t sexist because women are free to park in the trickier “man-spots” some of which are next to pillars and can only be backed into at an angle. (I’m curious what the Chancellor of Germany, Angela Merkel, thinks about this.)


A university in British Columbia offers women-only parking spaces near its main doors during evening hours to help keep female students safe. Do male students think that’s sexist? Well, I did find comments indicating that at least a few males consider this a discriminatory policy.


My first thought was that the use of pink plus wider parking spaces is patronizing and harkens back to old stereotypes of the weaker sex. But perhaps other women don’t view this issue the same way I do. Maybe they see it as a sign of respect or a convenience that makes their lives a little easier.


In the U.S. I’ve seen spaces designated for pregnant women or parents with children but nothing just for women. What do you think of women-only parking spaces? Would any of your female characters park in one?
*****
Photo courtesy of MailOnline.com
Posted by Kara Cerise at 12:00 AM

NO! NO! NO! Why is it that sexism is often disguised as a courtesy? It's double-trouble. If you call it what it is, you're called ungracious. Treat everyone equally and use good manners equally. If a man limped and looked longingly at the chair I sat in, I'd get up and give it to him. If a mother with a baby needed a seat, I'd give it to her. To pointedly aim at one group and generalizing about their behavior (creating a stereotype) is discriminatory. It's like providing fried chicken to blacks. Really?
BTW--the week that my son was due to be born--I mowed the lawn. I don't expect all women to do that, but then, not all women are alike--right?

My fictional women would leave the spots for those who need them, probably mumbling under their breath how stupid the concept is. When they’re feeble they’ll reconsider, but based on their being feeble, not female -- they are not the same thing.

Ugh. Nope, not for me. Not for most women, I suppose. I'll park far away and walk, thank you.

Good point, E.B. Sometimes patronizing attitudes are disguised as courtesy. That would be an interesting trait for a character.

I’ve read your stories, Jim, and I can’t imagine any of them taking an easy parking spot. I have one female character that would use a she-spot not because she is female but because she is an opportunist.

Sarah, I thought that would be out of character for you especially since you are a runner. My guess is that you also create strong female characters.

Sorry, Jim. I meant to write that I can't imagine any of your fictional women taking an easy parking spot. I'm going to blame my distraction on a bright red cardinal hopping around outside on the window ledge and peeking in at me.

My wife, who parks more efficiently than I do, would use them if they were close to where she needs to go.
More women's toilets might make up for how few there are compared to men's in just about every setting I know of.

I'm in favor of adding more toilets for women to create a potty parity. I think everyone would be happier with less wait time.

I wouldn't use them, even if I scraped both sides of my car and the cars next to me getting into the "trickier, man spots." It pisses me off to be patted on the head and have things made easy for me, NOT TO MENTION how angry I get that I DO have to be aware of my own safety because apparently society blames me if I'm attacked for walking alone in the dark.

If that picture is an "easy" parking space, I'd hate to see the more difficult ones. I hate spaces where you can't open the doors enough to get out easily.

I think it all boils down to not treating people as individuals. We have handicapped spots (but around here, it's very difficult to get a placard, so most of the time they go unused) and when safety is an issue (and I'm afraid there is not denying that women are more vulnerable than men to parking-lot crime, etc) it would be better if we could have some way to keep everyone safe.

"Protection" for women inevitably turns into a double standard and reduced rights. It's the old "Don't bother your pretty little head--I'm making the decisions attitude" that we have fought so hard to eliminate.

One of my local stores has "parent with children" spaces which are very seldom used. Frustrating when they sit empty in a crowded parking lot.

I'd much rather see good public transportation and a safe environment, rather than a feeling that women needed special treatment. Would I use those spaces? Maybe. I have difficulty walking long distances, but usually that doesn't apply in parking lots around here. I usually look for a drive-through and take that if I can get it so I won't have to back out past huge vans & trucks which mean I can't see anything until it's too late.

I wouldn't use one, either. It's sexist parading as courtesy. I'm probably in better shape than most men my age or even younger.

E.B. I had a tiff with my husband a few days before my first son was born and walked out of the house and walked over five miles before I came home. This was before cell phones so he had no idea where I'd gone.

Gayle, patronizing treatment and blaming the victim of a crime are two of my hot button issues. I have stories and it sounds like you do too.

KM, I also noticed that the easy parking spaces looked small and the cars large.
I wonder why it’s difficult to get a disabled placard in your area. Thank goodness you can use the drive-through for some errands.

I bet you’re in great shape, Gloria. I don’t think your protagonist, Catherine Jewell, would park in a "she-spot" either.

When I read this I thought it was an Onion article at first. One of my daughters lived in Korea for two years and I forwarded the article to get her take.
I would feel like an idiot "little woman" parking in that pepto bismol pink space! And so would my character, Serena Monterey. Though she's a former model who might appreciate the padded sidewalks (!) she knows her way around cars and would be insulted at the thought that she needed a wider spot to park in.
I am generally in favor of spots put aside for those with young children. Navigating a busy parking lot with little ones can be dangerous - I'd be happy to see a mom or dad parking in those.

It does sound like something the Onion would write, Shari. I guess truth can be stranger than fiction. But I haven't lived in Korea so I may be looking at the issue through my narrow world view. I'd like to know what your daughter thinks.

It makes me wonder if the pink extra-sized space was purposely used as a patronizing, offensive stereotype in order to create a buffer (where no one would park) next to the building?

Thanks for bringing this to our attention, Kara!

Interesting idea, Paula. I hadn't considered a hidden agenda. I'm curious if women were involved in the decision making process or gave input on how to make Seoul a women-friendly city.