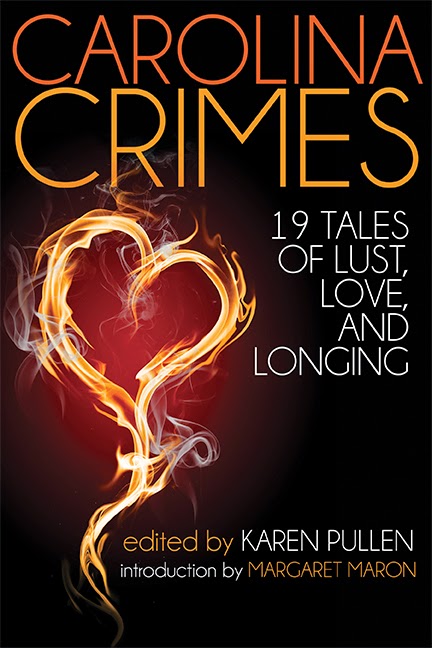 When Derringer winning author, Karen Pullen, announced the SinC Triangle, N.C. Chapter’s first anthology, I contacted her about submitting a short story. I wasn’t a member of the chapter, but I lived part-time on Hatteras Island. Karen informed me that the chapter had decided to accept stories from writers of both Carolinas and welcomed me to submit. I’m happy to report that in blind judging, nineteen stories were chosen, including mine.
The anthology’s theme of lust, love, and longing allowed writers to test the theme envelope. Some stories are shocking, some are risqué, others push the limits of morality, playing with readers’ sensibilities. The authors continue on that quest here by presenting “teasers” about their crime stories. Please welcome the authors of Carolina Crimes: 19 Tales of Lust, Love, and Longing.                          E. B. Davis
“Happy Pills” is a light-hearted romp about Rose, a youthful senior in an independent living facility who uses her sexual conquests as a way to steal her lovers’ prescriptions to help fund her retirement.                                          Linda Johnson

“A One-Cat Woman”
Cori Stanton, cat groomer extraordinaire, has to stop a serial killer before he poisons another feral cat colony. Can Cori count on her new acquaintance Hollis or is she a flake? Will Hollis, promiscuous cat lover, ever settle down with just one cat? Only the cat knows.
Antoinette Brown

“Accident Prone”
"Anthony Sturgess likes things to go just so. When the young woman whose car he bumped in a minor parking lot mishap is found murdered and Anthony becomes a suspect, his world quickly unravels as he waits impatiently for the chance to restore order."          RF Wilson

“Riley and the Sand Demon”
With Hurricane Janus and her undercover identity blowing up at the same time, Riley will prove to the memory of her slain handler that she’s not the screw-up girl on the force, or die trying.
Jamie Catcher

"Bad Hair Day"
A spectral detective talks to dead people, who often know who dunnit to them. But this particular victim cares more about her hair than the fact that she's been murdered.
Meg Leader

"Pound of Flesh"
During WW II, rationing forces a grocer's neighbors into the black market, where they pay, and pay some more, until someone decides the price is too high.                        Sarah Shaber

If you are attending the Malice Domestic Conference, go to the Wildside Press booth in the dealers' room to pick up your copy. Some of the authors will be available to sign your copy! It is also available through your favorite bookseller or at the online retailer sites. 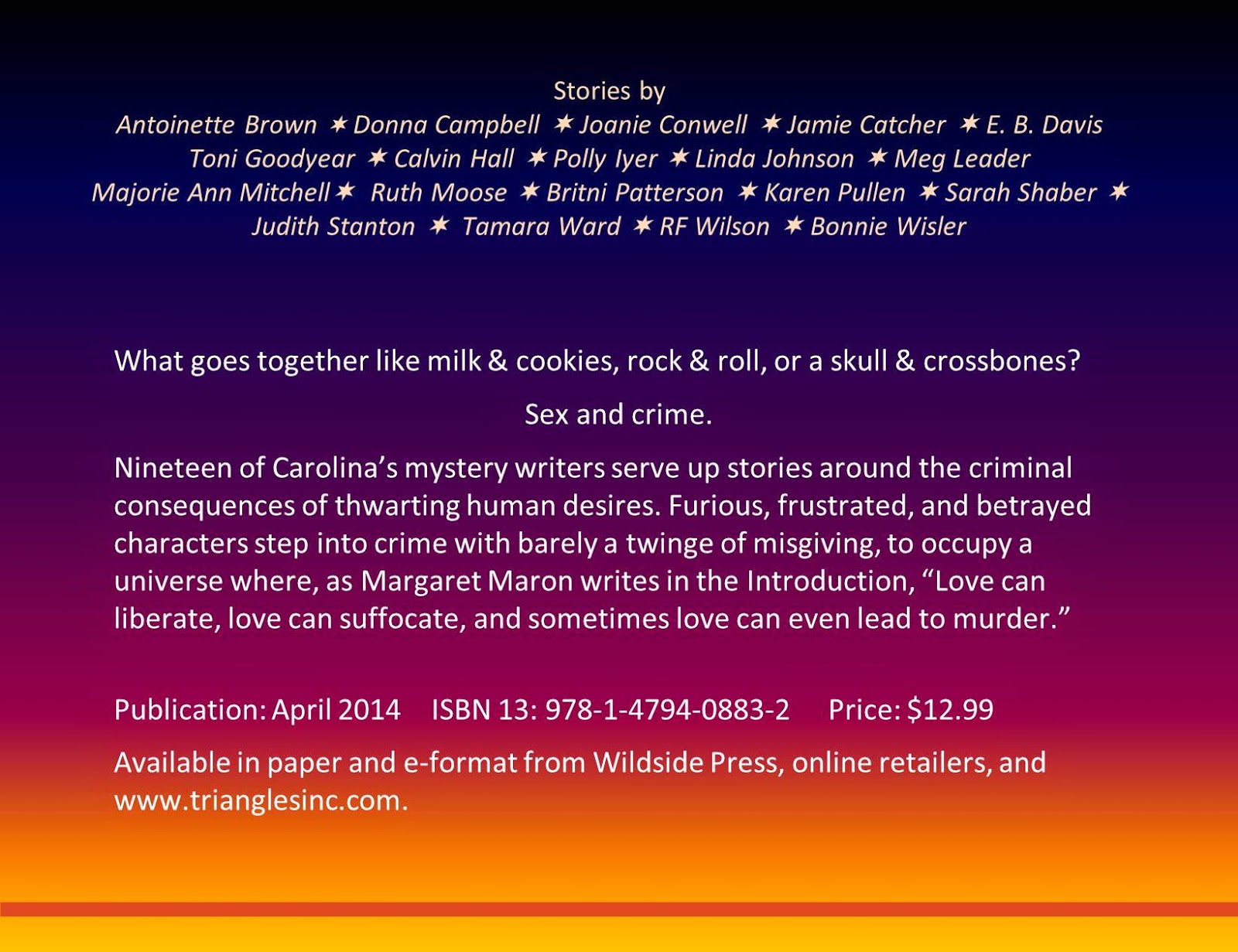 At Malice, Karen Pullen will be presenting the anthology on Sunday morning at Author's Alley. Please join us if you are able. Polly Iyer, Ruth Moose, and Karen and I will be talking about Carolina Crimes: 19 Tales of Lust, Love, and Longing!

The teasers hooked me! I look forward to reading these tales of lust, love, and longing. Congratulations to all involved with the anthology.

I love short stories, especially for a quick bed-time read when I'm not in the middle of another book, or when waiting--doctor's office, trains station, etc. This sounds like a book I need to buy.