Fairy Tales, Nursery Rhymes, and Children's Movies Aren't for the Faint of Heart 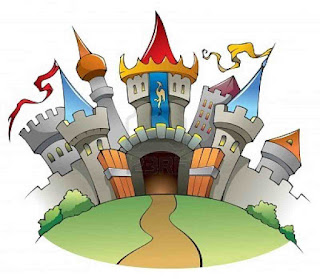 My daughter and son-in-law recently had a beautiful (okay, I’m partial) baby boy. While they were in the hospital, I was charged with caring for their almost three-year-old daughter, who loves to be read to and is just beginning to be interested in movies. What I rediscovered is that many fairy tales, nursery rhymes, and children’s movies aren’t for the faint of heart. A number of them are downright frightening.

For example, one of her favorite chapter books to be read to her contains stories of The Frog and The Toad. All seems pretty innocent between the two good friends as they help each other find a missing button or take care of each other when one feels ill, but there are also stories where the twist or final moral isn’t as kind. In Shivers, the Frog recounts an encounter he had as a child frog with the Old Dark Frog who eats little frog children for supper. The child being read to is left to decide if it happened or not. A calendar trick used in Spring teaches that a little deception can allow one to accomplish a goal.

Then, of course, there are those fairy tales from the Brothers Grimm. We think of them as children’s stories, but really they were adult versions with adult themes. For example, what is soothing about The Mouse, the Bird, and the Sausage? These three live together, each doing their own share of the tasks: the bird collects wood for the fire, the mouse brings in water, sets the table, and lights the fire, while the sausage keeps all three well fed. When the bird decides they should all switch jobs because the bird is doing more of the backbreaking work, the story ends with the sausage being eaten by a dog while going out to collect wood, the mouse imitating the way the sausage seasons food by throwing itself into the pot and dies, and the bird, while trying to fetch water, falls into the well and drowns. Not particularly comforting to an adult, let alone a child.

To this day, I can’t watch Bambi without having a panic attack when the fire kills Bambi’s mother. Similarly, the wicked witches and stepmothers in Cinderella, Snow White, and other stories/movies, don’t leave me with happy feelings.

Growing up, did a fairy tale, nursery rhyme, or children’s movie leave you scarred for life?

I know my parents read them too me, but since I recall no trauma, perhaps I repressed it all and that’s why I write thrillers?

I'm with Jim on this one. Maybe I was too young to understand at the time. Or maybe my crime writing career is a direct result of the stories my mom and dad read to me as a child.

I had my fill of Grimm's fairy tales as a child. I do remember preferring Hans Christian Andersen's stories. I remember sobbing after a Saturday matinee of "The Lost Dog."

We read all kinds of books to our kids, some more successful (Madeline and the Rosemary Wells Max and Ruby books) than others (the original Winnie the Pooh).

As a kid, Rumpelstiltskin never sat well with me. However, I managed to gain a new appreciation for the story during my fourth-grade mock trial, where Rumpelstiltskin took the Queen and King to court for breach of contract.

Old Yeller. I still can’t think about it. My brother spared me from ever seeing Bambi. He was nine years older than I and he told me it was unhappy. I flat out refused to go to the theater when it made the rounds in my generation.

On the flip side, I loved Peter Pan which introduced me to the magic of Broadway.

I was into my teens before I realized that the Brothers Grimm was a name and note a description of their stories.

Many of the old tales were told to children as cautionary or morality stories. If you go wandering in the woods alone, a wolf may eat you, etc.

The wealthy Victorians (the ones we usually think of when we say "Victorian," not the masses struggling to survive) not only loved morality stories, they didn't even take care of their own children, so may not have had any idea of the impact the stories had.

Oh, I can't even think about Bambi or Dumbo without a shudder. what was Walt Disney thinking?
Maybe I was a tough little kid, but fairy tales, especially of the Brothers Grimm type, didn't bother me a bit.

Love everyone's reactions. Jim -- definite possibilities can be seen there. KM, your definition of Brothers Grimm when you were a child as a description made me chuckle. Shari, thank you for shuddering with me about Bambi. Most of the other tales didn't bother me, either. Kait, agree on Old Yeller. I can still see the actor's fact. Sarah, I probably would have eaten up that mock trial! Margaret, it truly is a mixed bag as to both what we read and how children react.