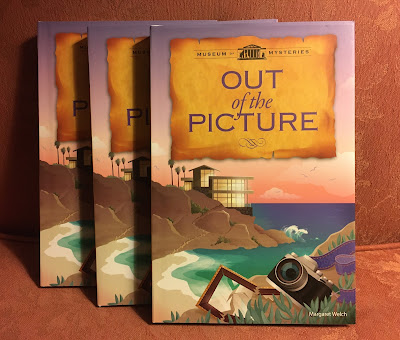 In publishing, what is a continuity series?

A series of books that follow the same characters through a story arc—but rather than being written by a single author, the books in a continuity series are written by several authors. This is similar to the way Nancy Drew and The Hardy Boys books were written, except that Nancy’s authors all used the name Carolyn Keene and Frank and Joe’s authors used the name Franklin W. Dixon.

With so many authors stirring the typewriter keys, in a continuity series, how do they keep from muddling facts about the characters and setting?

By constant updates from the series editor—she’s like the conductor of an orchestra (or maybe a playground monitor). As manuscripts are turned in, they’re edited in the order they’ll be published, and new or changed details are updated in a multipage series guideline.

Can you give an example of a continuity series?

Why yes, I can. The Museum of Mysteries, from Annie’s Fiction, is a good example. The series follows the adventures of archaeologist Scarlett McCormick, new head curator of the world-renowned Reed Museum of Art and Archaeology, located on the beautiful Monterey Peninsula in Crescent Harbor, California. And guess what? I happen to have three copies of book four to give away. Here’s a bit about book four, Out of the Picture, written by my alter ego, Margaret Welch.

Scarlett McCormick, head curator of the Reed Museum of Art and Archaeology, develops an idea for a reunion art exhibit with Allie Preston, her best friend and manager of the museum coffee shop. Based on a previous exhibit, the show will feature the same local artists from Crescent Harbor, California. Now all they need to do is find them.

Scarlett is shocked to learn that one of the artists perished in a fire at the Phoenix restaurant twelve years ago. She’s even more shocked when she sees the photos Allie discovered from a secondhand camera. A man with an uncanny resemblance to the artist appears in a recent picture at the restaurant where he supposedly died.

As Scarlett and Allie search for the remaining artists, they also investigate the puzzling case of the doppelgänger. But their inquiries are met with hostility and threats, and they fear the truth will never be exposed.

Someone will stop at nothing to keep Scarlett and Allie from solving the mystery. Will the two friends succeed? Or will they be permanently cut out of the picture?

Readers and writers, what’s the most unexpected or surprising “photobomb” you’ve discovered in a picture you’ve taken? Three lucky commenters will receive a copy of Out of the Picture (remember to leave your email address). Comments open through noon CDT 5/3/22.

The Museum of Mysteries, and other continuity series from Annie’s Fiction, are available through subscription book clubs.

What a fun contest, Molly. I'm drawing a blank this morning about a shout-out worthy photobomb, but I'm looking forward to hearing about others' experiences.

Years ago, my future husband wanted to take my photo by a large lake. I agreed. "Back up. Back up some more. Almost there!"

An aggressive swan attacked and nipped my backside.

No photo bombs here, but thanks for explaining how this works.

No photo bombs here. At least none that I remember :)

My "photobomb" experience was a casual picture taken of my kids when we returned from an outing in a nature preserve a bit on the muddy and disheveled side. I thought the kids looked so cute, and that their grandparents would appreciate a glimpse.

I sat them on the porch steps of our rental house, which was scheduled for painting in the next few weeks.

I didn't notice how the risers on the steps were scraped for their coming paint job and so rather decrepit-looking. Since this was a while ago, I positioned myself so that the sun was behind me. Which made the kids frown and squint.

The resulting picture, instead of being "cute," looked like something out of the Depression photography project, where conditions were documented by people paid to go out and take pictures in Hoovervilles and rural poverty areas.

It was not something I ever sent to the grandparents.

A swan, Margaret! That must have been scary. Makes a funny story, now, though.

Oh, KM, I can imagine how that picture turned out. Good decision to keep it from the grandparents (although I'd love to see it).

Kait, I'll see if I can put enough information together about subscription book clubs. I don't know much about them. In place of that, maybe I'll talk more about the process of writing for a continuity series.

Jim and Susan, I'm not sure I have any photobomb pictures either!

My best photobomb wasn't discovered until after the event. I was with my family in London. In front of Buckingham Palace are these huge bronze statues of standing (and anatomically correct) lions. There was a certain exposed part of these bronze lions that were shined to golden perfection. I took a picture of my family next to one and couldn't figure out why my young children were giggling so hard. When we looked at the pictures later, we realized exactly why that certain part of the lions were so shiny, thanks to some young men posing with the next lion in the background. This was followed by a conversation about why brass looks shiny when it's touched a lot, and no, children, I do not know why people touch the lions there...

I can't think of any photo bombs, but I sure enjoyed reading the ones here.:)