Killin’ It During a Killer Weekend 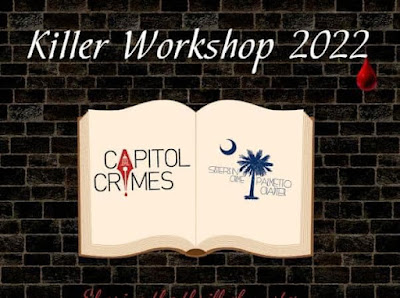 Following are the words of Penny Manson, Past President, Capitol Crimes Chapter of Sisters in Crime:

Once upon a time there were two Sisters in Crime (SinC) Board members. They lived on opposite sides of the United States, in different SinC Chapters even in different time zones. One lived in Sacramento, California, (The Capitol Crimes Chapter) the other in Columbia, South Carolina (The Palmetto Chapter).

It happened that a great pandemic had taken over the land and many SinC Chapters were undergoing changes. Some lost many members and even their chapters as the period of the great Zoom came over the land. As time passed the two SinC Board members began to see how the differences in each of their individual chapters could add up to strengths when combined together.

It’s been a real privilege for me to get to work with Penny (she’s the Capitol Crimes member and I’m the Palmetto Chapter member) on the in-person and virtual Killer Workshop that took place this past Saturday, May 14, 2022. In addition, the village that made this project a reality included: (1) the members of the Capitol Crimes board, Sarah Bresniker (President), Jennifer Morita (Vice President), Karen Phillips (Secretary), James L’Etoile (Treasurer), and members-at-large Richard Meredith and Terry Shepherd; (2) the members of the Palmetto board, Carla Damron (President), Yasmin Angoe (Secretary), and Cathy Blake (Treasurer); and (3) the workshop committee, Jessica Cline, Chris Dreith, Rae Franklin James, James L’Etoile, Jennifer Morita, Karen Phillips, and Marie Sutro.


Previously, I’ve written about this endeavor in the Stiletto Gang and Writers Who Kill. This event had two different venues (one in Sacramento and the other online) and two different schedules. In Sacramento, participants could chose between two programs for part of the day. Online, we had three wonderful panels expertly moderated and facilitated by Dana Kaye.

And, here is why an effort like this requires a village and some flexible planning. Originally, Gregg planned to be in-person at the Sacramento venue, but on Monday prior to the event we learned that he had contracted Covid. With Gregg’s willingness, Dana Kaye’s assistance, and Charles (our in-person audio-visual coordinator) Gregg’s interview was conducted through the online Crowdcast format and simultaneously made available to all the registrants.

On the bright side, Gregg answered Dana’s and registrants’ questions from a desk where he had a “floating” aloe vera plant given to him in recognition of the consecutive aloe vera plants named Vera that his character Evan Smoak, Orphan X, has in his office.

When asked about his writing practice, Gregg indicated he began each day tackling the first draft. About his writing style, he said, “I need to keep the possibility of discovery on every page.”

Penny Manson described some of the highlights from the in-person program:

The speakers had insights for the readers of their books and for writers who aspired to create their own work. Kris Calvin, another victim of COVID, was not well enough to attend but provided attendees with a downloadable copy of her presentation, “Your First Novel: How to Finish Writing it & Sell it When You Do!” as well as a copy of her first book which she referenced in the presentation.

What struck me the most listening to the speakers was how knowledgeable, willing to share, and generous they were with tips, insights, and suggestions. Everyone found items of interest. Most of all, I laughed, a lot, but it wasn’t all fun and games. I don’t see how anyone could not have been moved when DA Anne Marie Schubert talked about the human toll of a violent offender like the Golden State Killer and what drove her to use this new tool to not only punish the criminal but free those wrongfully accused. Ryan Nickel from the Sacramento Crime lab followed her on the schedule and was simply put, fascinating to hear talk further about the science and technology they use now and will develop in the future. (Don’t even get started talking about what cell phones can tell us about tracking bad actors, finding dead bodies, and lost children.)


Finally, an informal panel of all the speakers (except Cara Black who had to leave early) took questions from the audience and spoke frankly about their experiences concerning “What interesting things are currently on your browser?” and “Where do you get ideas for characters?” and “How do you conduct the business of writing” and “Are you making any money?”

All in all, it was an incredible day with a fabulous lunch from Panera’s and our own little Book Store thanks to Face in a Book.

Face in a Book, located in El Dorado Hills, California, also provided a book store for the virtual audience.

In the virtual program, a panel of lawyer mystery writers, Debra H. Goldstein, Roger Johns, and Wanda Morris, spoke about how legal training and writing taught practitioners about the value of effective storytelling. Debra mentioned that lawyers “like to play with words.” Roger talked about being like a crow “picking up items for the nest.” Wanda said that lawyers were good explainers and she had to learn how to give the bits and pieces without explaining so much.


The second virtual panel of Yasmin Angoe, E.A. Aymar (Ed), and Carla Damron dealt with the difficult topic of how to portray sex trafficking in fiction. They all said they were inspired to write about the topic after hearing victims speak and demonstrate true bravery. Audience member Sue Husman wrote in the chat room that she needed to hurry home to warn her nieces about what she had learned.

Finally, a panel of authors who co-write with other authors spoke about their experiences being part of a team and the balance that must be achieved. Specifically, Robin Burcell collaborated with Clive Cussler on his Fargo novels; Terrie Farley Moran worked with Laura Childs on her scrapbooking cozies and now writes the Jessica Fletcher, Murder She Wrote novels; and Charles Todd, with his mother Caroline, penned the Ian Rutledge and Bess Crawford series.


This is how Penny Manson concluded her explanation of our joint endeavor:

And that is how the Killer Workshop came to be. One, both Virtual and In Person, event with great speakers appealing to both reader and writer alike. Just like a true family of siblings, greater than the sum of their individual parts they came up with a way for SinC Chapters of all sizes to carry out joint projects and be better together than they are apart.

Thank you, Penny and all the folks at Capitol Crimes and Palmetto for encouraging this project. It’s been a learning process and worthwhile achievement. I think Sonja Hazzard-Webster, the President of Capitol Crimes who brought us together would be proud. I certainly consider it a part of her legacy.

Kudos to Paula, et al for pulling this off. It was a lot of fun.

Paula and Penny did a fab job with this complex project!!!

So impressed! There isn't much good to be said about the pandemic, but this kind of collaboration is a definite win.

Annette, Susan, and Molly, we were so pleased with our speakers and participants. There was an opportunity to hear some fascinating and insightful information.

Debra and Carla, thank you so much for sharing your time and talent. You are both rock stars!

AH, the joys of cooperation and mutual support among writers!