One Writer, Many Stories 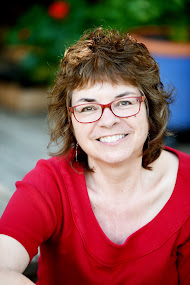 One Writer, Many Stories by Leslie Budewitz

The universe is made of stories, not atoms.

A writer’s heart holds many stories. Some are drawn to a particular type of story, mining the vein a little deeper each time, digging up more gold with each effort. Other writers find that the stories they want to tell are best described by a variety of labels.

Readers can be described much the same way, with some reading deeply in one or two genres and others reading more broadly.

Turns out that as reader and writer, I’m a little of each.

My first published novels were culinary cozies, the Food Lovers’ Village mysteries set in a small town in NW Montana, followed by the Spice Shop mysteries, set in Seattle’s Pike Place Market. I love to read cozies and to write them. They are, in many ways, the perfect prescription for difficult times.

The cozy gets a bad rap now and then, as fluffy and frivolous. That’s unfair. At heart, it’s the story of one woman’s effort to restore the social order of a community damaged by an unexpected crime. There may be food, and cats, and festivals, but ultimately, a good cozy shows the powerful impact one 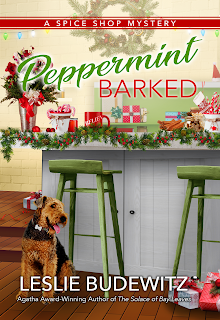 person can have, healing the wounds inflicted on the people and places that matter to her.

But while I was writing those cozies—six in Village series and five Spice Shop mysteries, with the sixth coming in July and the seventh spread out on my desk—I was also writing short crime fiction. One story, maybe two, a year. Traditional, noir, police-based, and yes, cozies. Short stories are perfect for experimentation. They don’t take as long—well, okay, one did take sixteen years, but hey, it won a Derringer Award, so time well spent. They let us play with points of view, era, and location, as well as genre or subgenre.

Along the way, I realized that much as I love the cozy, I like a darker, moodier story, too. One best called suspense.

That led me to start a stand-alone with four point-of-view characters and two intersecting timelines, a contemporary cold case investigation interspersed with a story that unfolds over thirty-five years. It’s not an unfamiliar structure, but it’s very different from the first-person cozy mystery wrapped up in two or three weeks. I immersed myself in reading that kind of narrative, working on the manuscript between other projects. At one point, my office closet doors were covered in sticky notes in multiple colors, present action on one bi-fold door, past on the other half, newspaper clippings on the next panel. 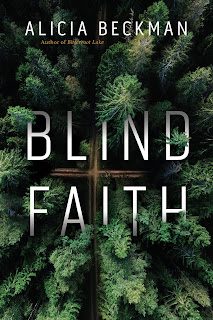 It took four years. In Blind Faith (written as Alicia Beckman, October 2022), two women whose paths crossed decades ago as teenagers in Montana discover they share the keys to a deadly secret that exposes a killer—and changes everything they thought they knew about themselves.

During that time, I kept writing cozies. I proposed a traditional mystery series, and my editor thought the first would make good standalone suspense. That led to Alicia’s first novel, Bitterroot Lake (2021). While it’s a straightforward narrative told by one POV character, the shift in subgenre was a challenge because it varied so much from my original conception. In a mystery—and I’m oversimplifying here—a crime occurs, and our sleuth, whether amateur or professional, solves it. More crimes may happen along the way, but the path is clear.

In suspense, our protagonist is unexpectedly confronted by danger from a source she can’t identify. Nothing like this has ever happened to her, and it takes her time to realize she’s got the skills and resources to fight back—even if no one believes she’s in trouble.

My challenge in writing suspense wasn’t shifting from cozy to moody. Jokes, word play, recipes—they never entered my mind. They simply weren’t part of the story. Like you don’t reach for the garlic when you’re making chocolate cake. It’s just not on the menu. In Bitterroot Lake, Sarah’s goal wasn’t to figure out who killed Lucas Erickson. It was to figure out who was sending threatening letters and how to stop her recurrent nightmares. Naturally, killing and letters end up being connected, but what drives the protagonist differs in mystery and suspense.

Of course, every mystery has elements of suspense and every suspense novel has its mysteries. I’m talking subgenre, not the details.)

So what unites my cozies and suspense? I discovered the answer when a friend who read Blind Faith said “I could hear your voice throughout.” Another friend had said of Death al Dente, my first Food Lovers’ Village mystery, “it sounds just like you talk.” And I’d heard similar comments about Pepper in my Spice Shop mysteries.

Turns out it’s not so much the rhythm of my main characters’ sentences, or how they swear or talk to themselves, though there is some of that. What unites my stories is what the characters care about. How they think of the world.

My characters are concerned about community. About their relationship to their physical surroundings, whether it’s their home, the land, or the historic building they work in. If an issue arises in my life, it might show up in theirs, because I want to explore it.  My main characters are interested in the world around them, even though they don’t all read or watch movies or garden. They do all love food and art! They’re interested in friendships, especially between women. In starting over. In healing the wounds injustice causes.

They sound like me because there’s a little bit of me in each of them. And that’s a good thing, because no matter what the genre and tone of the story, that’s how we make our characters come alive.

Leslie Budewitz blends her passion for food, great mysteries, and the Northwest in two cozy mystery series, the Spice Shop mysteries set in Seattle’s Pike Place Market, and the Food Lovers’ Village mysteries, set in NW Montana. Watch for Peppermint Barked, the 6th Spice Shop mystery, in July 2022. As Alicia Beckman, she writes moody suspense, beginning with Bitterroot Lake in April 2021 and continuing with Blind Faith in October 2022. A three-time Agatha-Award winner (2011, Best Nonfiction; 2013, Best First Novel; 2018, Best Short Story), she is a current board member of Mystery Writers of America and a past president of Sisters in Crime. She lives in northwest Montana.

Oh, I love these covers! Can't wait to read the books.

Thanks to you and this post, I now understand the visceral difference between cozy and suspense. Great food for thought!

First, Leslie, I’m glad to understand how you manage writing multiple series at the same time. And second, you make it very clear that the genres are different. Like Kait says, thanks.

Thanks to you both, Kait and Susan. I'm delighted to be here today, and always happy to shed a little light on the mysterious world of crime fiction!

Nice to have you here today, Leslie! Thanks for standing up for cozies and for explaining the difference between mystery and suspense so clearly. In fact, as I read your definition, I heard it in your voice - that wonderful voice that carries your novels and short stories to satisfying endings.

Thanks for guesting today and for the distinction you drew, plus the way you explained how you are a part of every story you tell.

An interesting take. IMHO the British traditional can do both while leaving out the romance and the recipes. They truly do MYSTERY and most do it with the purpose of allowing the reader to be part of the detecting squad. I really do not like the way too many sites just lump in thriller and suspense with mystery. Dissecting those differences would be interesting.

I always knew behind that cozy mystery author, darker characters were trying to claw their way onto the page.

So great to see the variety and extent of your writing!

Pat, I agree that knowing the differences is important for us as writers, because the different traditions carry different reader expectations. As you note, it can be confusing when thrillers and suspense are lumped together although of course they and mystery can all be characterized as crime fiction.

Jim, too funny! I'm pretty sure I'll keep writing both.

Leslie, You write your cozies in two to three weeks? WOW. Thank you for the thoughtful explanation of writing multiple genres. One day I hope to try my hand at psychological suspense. For now one series is all I can manage. You've helped me see the path.

Darlene, good heavens, no! I can't see what I said that left the impression I could write a complete novel in 3 weeks. 4-6 months for a cozy.

Good luck on the path!

Thank you all for the kind words, and thanks to Debra and the Writers Who Kill for the invitation!

Leslie, that is one of the best explanations of cozy and suspense and the crossover. I've always wondered if there's an author out there who doesn't, even in a small way, incorporate themselves in their work. I envy how you can work on both at the same time.

Thanks, Valerie. We all have many stories to tell!

This was very well put. I write suspense--cozies are difficult for me. I like the crossover element that you speak about, Leslie.

Thanks, Damyati. It's a bit like exercising different muscles -- something walker-me is feeling right now after making a push in the garden!