In Search of Moose by Rosalie Spielman

I was born in the tiny town of Troy, Idaho, or rather, in Moscow, Idaho, the next town over with a hospital. We moved away from the area when I was ten or so, but my parents kept a plot of land out in the country. They hoped to move back someday and a few years ago were able to act on that dream, building a Swiss chalet-look alike on a remote hill. Meanwhile, I had been looking for a rural setting for my book and had tried writing it as Maryland, Kansas, and even Texas. Nowhere felt right, until I visited my folks. I knew immediately that it needed to be set there.

One of the appealing things about my parents' plot of land is the open space, which hosts a plethora of wildlife. When we visit, my husband and I like to have our coffee sitting on the balcony, watching the deer and elk cross a ridge in the distance. We spend the day watching the birds that parade through—pheasant, quail, countless types of songbirds, and my favorite, the hummingbirds. Binoculars are ever present near every picture window of their house. 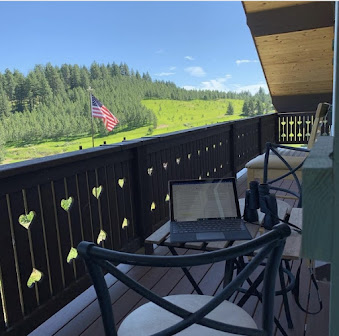 The moose is the one creature in the area that has eluded me so far. They are seen fairly regularly around town, munching away in people's gardens, in fields, crossing roads, or creeping about in the trees like a quadrupedal sasquatch. I even saw a video on Facebook of a moose and her calf moseying right down the center of Troy's Main Street. I don't remember ever seeing one as a child growing up there, but I do remember a home video my mother took of one.

Probably during our second visit to my parents' new place, I lamented that I wanted to see a moose. My father offered to take me to town to look for one after there was a picture in the paper of a bull moose walking down Moscow's Main Street. I declined. I mean, a city moose? Naw. On that trip we did see a bear though, a young one, sprinting across the field in front of their house. 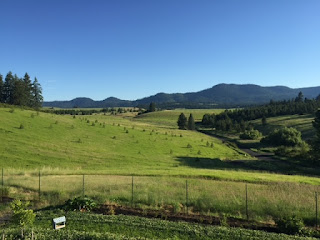 We headed home, un-moosed. My parents texted me two days later that one showed up at the pond across the way. 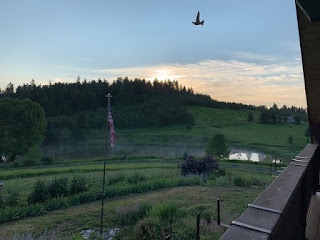 Our next visit was a repeat of my frustrated desire to see a moose. But that time my parents texted me as we drove to the airport for our trip home. If that moose had come fifteen minutes earlier, I would have left Idaho happy.

My next trip was in early spring and there was a snowstorm. And wouldn't you know it, there were moose tracks right through the field around their house. A few days later, we found moose droppings—which if you are ever out in the wild and see a pile of pecans in their shell…those are not pecans.

My son started college in Moscow last Fall. A month or two ago, there was an emergency text sent to students to give the moose sighted on campus a wide berth. (Apparently, they felt college students needed to be told to avoid a creature bigger than mommy's minivan.) There were pictures of a moose peering into the windows of the bookstore and lounging on the grass in the Arboretum. It seems to me the dang things are everywhere, except when I'm around. My family will send pictures, but that’s not the same. Moose are just as elusive as the Northern Lights, which I saw as a child but haven't seen since.

So, of course, there had to be a moose in my book set there in Idaho. Magnus the moose, as my fictional locals call him, actually plays a pivotal role. So at Malice Domestic, since I didn't have a book cover yet, a stuffed Magnus was my panel companion. Now that I do have a book cover, I can tell you that I am so excited that there's a moose on it! Do you see him?

But I'm telling you right now, Magnus, I am making you famous, so you had better make an appearance next time I'm in Idaho. 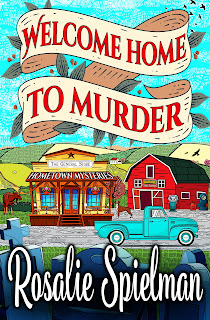 Welcome Home to Murder will be released 7 June, 2022, and Gemma Halliday Publishing will be donating a portion of the proceeds of all sales for the month of June to the Disabled American Veterans organization.

Tessa Treslow never wanted a small town life. As soon as she graduated high school, she happily escaped her tiny town to join the U.S. Army, leaving New Oslo, Idaho, population 852, firmly behind her. Twenty years later, the hometown hero is finally ready to come back—even if she has just a visit with loved ones in mind while her family is hoping to convince her to stay for good.

With her fawn Boxer dog, Vince, in tow, Tessa falls into the unsettlingly familiar small town life, helping out in her family's general store and her feisty Aunt Edna's auto body shop. But her peaceful homecoming is suddenly shattered when the dead body of a crooked con man turns up in her aunt's shop, and the police have some serious questions for the family. To make matters worse, the sheriff in charge just happens to be Tessa's ex-boyfriend... and things did not end well between them all those years ago. When it comes out that the con man was trying to get his hands on the family business, Tessa knows they're in trouble.

With her family in danger of being dragged away in handcuffs, Tessa becomes a woman on a mission to find the con man's killer. Between a slew of suspects, a meandering moose, and a handsome newcomer with his eye on Tessa, she has her work cut out for her. But when the killer changes tactics—putting everything her family holds dear in jeopardy—Tessa begins to realize what home really means to her. Can she be the hero for her hometown once again... before it's too late?

Posted by Rosalie Spielman at 6:55 AM

Despite their size, moose can be elusive. I see them every year around our woods, but my trail cameras see them much more often than I do. And It's amazing to watch them saunter off into the woods and "disappear" as though they put on an invisibility cloak.

A moose in the mystery mix! Sounds like a winner. Congratulations on your upcoming publication.

I love it all and can't wait to read it. Congratulations!!

What gorgeous property. You'll see your moose. He'll be there when you least expect him. What always surprises me is how huge they are and how silently they move!

No experience with any moose where I live, but I can see how you might incorporate them in a mystery. Mysterious, sliding into the woods.

Sometimes the elusiveness makes finding it pale in comparison to the search. Keep hoping, searching, and writing --- looking forward to your new book with its unique perspective from the female vet's viewpoint.

It's thrilling to finally see an elusive wildlife creature.

This calls to mind one time, years ago when photographs had to be developed & printed, a co-worker picked up his finished photos on the way to work. He'd just returned from a trip and was eager to show us what he'd seen.

It was supposed to be a trip for hunting elk. He was a little disappointed that they hadn't even seen any elk, but the whole adventure--comradery, hiking, camping, admiring magnificent scenery--made the lack of elk a minor issue.

As we looked at the first picture, there, staring us right in the face, was an elk, which visually blended into the forest. There were some additional ones in a few of the other photos, too.

Thank you, everyone! Someday I will see one!

When my hubby retired from the Coast Guard, we did a family cross country drive and stayed in a campground near Jackson Hole. I was coming back from getting some water when an elk casually strolled between two lines of tents. I was stunned that so few people even turned to see his passage! I'll never forget how big he was, and how quiet.
Your book sounds terrific! Preordered - can't wait for it to land in my Kindle.