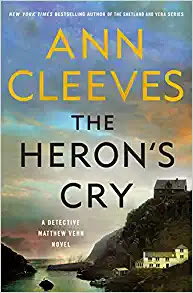 After reading two fast-paced suspense thrillers, I took a deep cleansing breath and immersed myself in a traditional mystery, Ann Cleeves’s The Heron’s Cry, set in North Devon. In the second book of her Two Rivers series, the bodies soon start to drop.

Matthew Venn is the introverted lead police detective in charge of the murder investigations. In her first book of this series, The Long Call, Cleeves explores Venn’s childhood and family. In this book, she presents more about Venn’s marriage to Jonathan. Venn’s husband knows the victims, their friends, and families, and his knowledge proves integral to the plot resolution.

Venn depends upon his sergeant, Jen Rafferty, who attends a party with a murder victim the night of his death. Jen is able to establish a rapport with witnesses and the families of the victims. Venn trusts her insights, much in the way PD James’s Adam Dalgleish trusts his team member, Kate Miskin. Completing the murder squad is Ross May, inexperienced but eager to succeed, who serves as the liaison with a freelance digital forensic expert.

Cleeves alternates points of view among the three investigating officers, Venn’s husband, and the daughter of one of the victims who finds herself in grave danger.

Venn’s investigation is complicated by a local young man’s recent suicide and a benefactor who intends to close a retirement home and displace the residents. Venn is a listener, a thinker, and a methodical investigator, assessing new information his team discovers and incorporating it into what becomes a larger investigation into several suspicious deaths. Venn ruefully realizes that he is basing his investigation on “guesswork and intuition,” which clashes with his more usual buttoned-down, analytical style.

WWK blogger Kathleen Rockwood points out that Cleeves often keeps relevant details from the reader, though the POV characters are aware of them. Cleeves doesn’t write puzzle mysteries, but instead, creates wonderful narratives focused on a richness of setting and characters, with a convoluted plot.

Ann Cleeves spent her childhood in North Devon, and, I suspect, incorporates childhood memories with more recent visits to the area. She describes Westacombe, a farm and artist’s community from the perspective of Jonathan, Venn’s husband:

“The low sun made the place glow, seem magical. Every colour was heightened, more intense: the red of the brick and tile at the big house and the green of the field next to the lane where black and white cows grazed. From a distance, the thatched cottage could have been a poster for the North Devon Tourist Board. It was all too perfect and not quite real.” (p.141-142)

Seabirds play a role in Cleeves’s Two Rivers series. For her first book, The Long Call, the title refers to a seagull’s complex vocalization of aggression toward other gulls. In The Heron’s Cry, Venn’s husband tells him, “Those birds always remind me of you. So patient. Just willing to wait. Entirely focused on their prey.” (p.236)

In the final chapter, Venn reflects on the same bird: “Matthew drove home across Braunton Great Marsh, past the pools rich with wading birds and waterfowl. The grey heron stood still, solitary and motionless, its eyes fixed on the water. Under the huge sky, Matthew felt the tension drain from his forehead and his limbs, and all he was left with was his own guilt.” (p.380)

I’m a diehard green rainhat fan of the Vera Stanhope series—though it’s difficult to separate Brenda Blythen’s portrayal of Vera from how Cleeves portrays her in her books. I’m enchanted by the Shetland series, particularly how the setting assumes the role of a major character (like PD James’s books). In the Two Rivers series, I’m learning about Matthew Venn, who is confronting and moving on from a complicated past, while he and his husband build their marriage. Venn, the listener, is becoming Venn, the astute investigation leader. Perhaps by the third book Venn will be able to communicate more of his thoughts to his husband and investigative team. Maybe the heron will finally cry.

Readers and writers, do you have a favorite Ann Cleeves series?

Margaret, your reviews always make we want to rush out and get a book! I've also been a fan of the Vera TV show and didn't realize that the actress diverges from the characterization in the books. How so? (I haven't read them yet)

I haven't read enough Anne Cleeves. Now I plan to remedy that. Thanks, Margaret!

This post is truly inspiring. I like your post, and everything you share with us is current and very informative, I want to bookmark the page so I can always return to hear from you. Meanwhile don't forget to check this site too for lots of information on new month wishes to my love

Molly, I admire Cleeves's mastery of multiple points of view and how she continuously "grows" her characters. Her settings, particularly the Shetland books, are a major character in themselves. Many of her books remind me of PD James, though I like Cleeves's characters better.

I have just finished reading this book, and I find Matthew Venn to be a welcome addition to both Ann Cleeves's body of work and as an example of accepting diversity into mainstream contemporary popular literature.

With their complexity and exceptional character portrayal, I find Ann Cleeves' novels to be a treasure to be savored.