What Crow Says by Linda Rodriguez 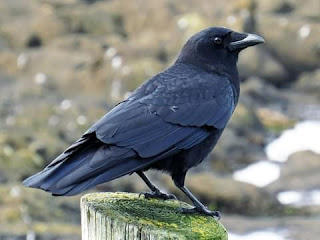 I have a strong propensity for crows. They're birds that don't get the love and respect that other birds do because they're not as flashy in appearance and their voices are harsher, even though they are classified as songbirds.

Crows are intelligent, can make tools and remember the faces of those humans who have been a threat to them or their community, even have rituals to mourn their dead. They often bring us messages of wisdom from the Creator and show us the way when we need guidance.

This poem is the first in a sequence of mine called "First Cousins Speak." In these poems, some of our relatives in the larger world discuss humans, those troubled, puzzling late-come additions to Creation.

This is how gods are made.

The land is wild and free,

One day, the stone lights up

with the dreams of animals.

Out of the shining,

These things happen so easily.

everything intent on being warm.

Who knew what damage dreams could wreak?

from whatever’s wasted or not wanted in us,

we watched it arise

but so weak and slow.

Bear can outrun a horse,

kill a deer with one blow.

It should have died but didn’t.

Some tenacity kept it alive

and breeding and changing

the very world around it

We all spoke the same language

until that changed, too.

Now we are the other,

everything other to this being.

We are the constant target in the crosshairs.

Now we live with the burden of being seen,

living into our observed death.

Chaos is forever seeping in.

All it takes is a crack in creation

Here is a wound no spell can heal.

We’ve tried them all.

Not even Spider can weave us whole again.

Spoilage creeps over the whole land.

It’s all we have left.

Live close to the edge.

This is beautiful, Linda. Crows are amazing birds. I love watching them.

Crows lived in the woods behind our house. I was always fascinated by them. Their numbers declined for a while (I think it was at the time when West Nile Virus became widespread) but rebounded after a few years.

Kait, I think they're pretty amazing, too. I'm glad you like the poem.

KM, I, too, I have always been fascinated by them. There is so much more to them then most of us humans are willing to admit.

Thanks for the poem, Linda, and for loving crows. When we lived in the woods of east Tennessee, they gathered in huge numbers in our trees in February each year. Now we live in a small city in the flatlands of central Illinois and we have crows all year - masses and masses of them flying in wide columns overhead in fall and winter, nesting pairs all over the neighborhood in spring and summer. I talk to them when I see them on my walks or when they come to drink rainwater from the roof gutters outside my window, but they wisely hold their counsel.

Molly, crows are messengers, guides, and wise counselors, but never forget that they always have a foot in death's kingdom and carry out vengeance, as well. We must always treat them with respect.

Lovely. I like crows, though maybe not at 5am when they gather in the trees outside the bedroom window. Or menace nesting birds. They're clever, devious, and know much more than they care to share.

Margaret, I don't know. I think crows often get a bad rap. They're so smart that they know how to develop and use tools to do what they want and need to do. They grieve for those that they lose, and they remember people who have attacked or threatened them and will take vengeance. Not so different from human beings, it would seem.