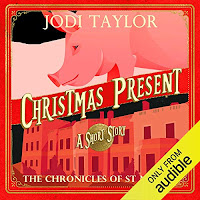 Chronicles of St. Mary’s by Jodi Taylor
I’ve always adored audio books, and now, with Covid, I find myself listening to them more frequently. I’m home a lot these days, and there’s nothing better than turning on a great story while doing boring tasks like getting dressed in the morning, doing mountains of laundry, and cooking three meals a day (I didn’t sign on for that!). To add even more enjoyment, my car audio system picks up automatically right where I left off, so I can get a chapter or two in during my thrilling excursions to the grocery store. Currently I’m listening to short stories in the Chronicles of St. Mary’s series by Jodi Taylor, featuring a bunch of disaster-prone historians who work for the St. Mary’s Institute for Historical Research, deep in the English countryside. They investigate major historical events “in contemporary time”—call it time travel at your own risk. Taylor is a brilliant writer, really funny, and I’m waiting eagerly for the latest novel in the series, Plan For The Worst, out now in the U.S. and available on Audible on August 16th. If you’ve never read this series, you have a treat in store—the perfect getaway!
—Connie Berry

Paris Never Leaves You by Ellen Feldman
When World War Two ends, Parisienne Charlotte Foret comes to live in New York with her daughter Vivi. Though she now has a good job and a good home, she is beset by guilt for the things she had to do to survive as a young widow with an eighteen-month-old child in a city overrun by Nazis. In this beautifully-written, memorable novel, Charlotte confronts her past transgressions and emotions in order to live fully in the present.
—Marilyn Levinson 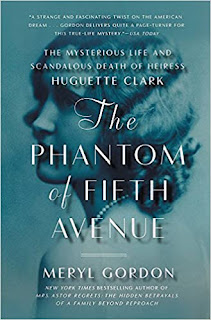 The Phantom of Fifth Avenue by Meryl Gordon
To kick off my retirement as a probate paralegal with a trusts and estates litigation practice, I decided The Phantom of Fifth Avenue by Meryl Gordon. The book is the biography of Hugette Clark, daughter of copper baron William Andrews Clark. Hugette inherited an estimated $50 Million at age 21 and died in 2011 at age 104 with an estimated net worth of $300 Million and no lineal descendants. My firm was not involved in the litigation, but the story was closely followed by T&E legal professionals at the time. Everyone had an opinion; few had the facts.
to read

The book, which ends with the ultimate details of the testamentary litigation settlement, is well-researched and it is clear that Gordon had the cooperation of the Clark estate and parties on both sides of the litigation in the writing. There were few enemies in this story and fewer villains. The story itself begins with details of how the vast fortune was amassed, and the human cost of the acquisition. It flows through Hugette’s extremely privileged, if sad, life through to her final twenty years which were spent in a hospital room surrounded by twenty-four-hour care private nurses. The main character was eccentric, but not incompetent. Nor was she ill.

The book provides a wonderful study of how the choices made during life provided legal fodder for the ultimate distribution of vast wealth. Somehow by the end of the book I had the feeling that Huguette was having the last laugh. She was done with her money and had done with it as she wished during her lifetime. Now others could squabble over it if they chose. I recommend this book both as a legal cautionary tale and for a glimpse into a highly privileged lifestyle no longer possible in the twenty-first century.
—Kait Carson

The Eighth Sister by Robert Dugoni

My mystery reading preferences tend toward the suspense/thriller side of the spectrum, with a good police procedural thrown in for spice. Having enjoyed many of Robert Dugoni's novels, when I saw he had a new series, I had to give it a try. The Eighth Sister [Thomas & Mercer 2019] features Charles Jenkins, a former CIA case officer who agrees to return after years of retirement because he needs the money. It's an international thriller that dances across continents. Naturally nothing is what it first seems, and the risks were understated. Of the fifty books I have read so far this year, only ten rated five-stars. This was one of them. [Full disclosure, I've met Bob several times and have taken a class from him.]
—Jim Jackson

The Shooting at Chateau Rock by Martin Walker 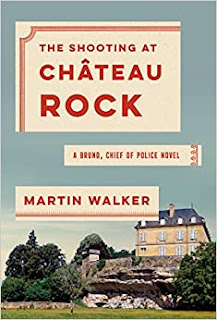 The most recent book in Walker’s Bruno, Chief of Police series, features an aging rock singer, a Russian oligarch, and their young adult children, plus a coterie of nefarious insurance agents and a crooked notaire*. The Maidan Square massacre in 2014 Kiev plays a role, as does the sale of Maltese and Cypriot passports to Russians and Ukrainians.

The natural death of a local sheep farmer becomes questionable when his children learn their father has sold the family farm—their inheritance—to an insurance company in exchange for a room in a five-star retirement home. Bruno suspects foul play. He pursues his investigation, who is Putin’s private banker in western Europe.

Bruno saves the day, cooks several gourmet meals for his friends, and takes his basset hound, Balzac, to mate with a ravishing basset, Diane De Poitiers. It’s a busy and productive summer for the chief of police, replete with descriptions of the memorable food and wine of the Dordogne region in southwest France.

*A notaire is a public officer representing the State who is also a qualified lawyer.
—Margaret S. Hamilton

The Ghosts of Harvard by Francesca Serritella
I just finished Ghosts of Harvard by Francesca Serritella. Featuring beautiful, lyrical prose, lush description, and heartbreaking emotion, this book keeps the reader guessing as Cady Archer struggles to deal with her freshman year at the very university where her older brother recently leaped to his death in a losing battle with mental illness. Was his death really suicide? Were the voices she now heard an indication that she was following him down the same path? Or was she being haunted?
—Annette Dashofy

Master of Illusion by Nupur Tustin 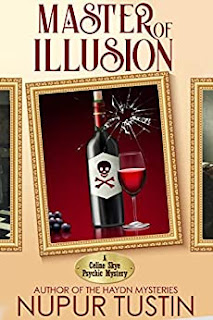 I became familiar with books by Nupur Tustin through her Joseph Haydn Mystery Series, featuring composer Joseph Haydn. Recently, in a real departure from her historical series, Nupur published the first in a contemporary series, Master of Illusion: A Celine Skye Psychic Mystery. It is a stunning mystery and one that readers will enjoy even if they aren’t into characters with psychic abilities.

I’ve been reading Master of Illusion and enjoying it immensely. It is the first book I’ve read in a long time that I can’t wait to get back to. I wish now I had the audio version so I could listen to it while doing other things. Nupur puts her twist on the real life 1990 robbery of the Gardner Museum in Boston. The pacing and twists in Master of Illusion will keep your reading throughout the night to find out what happened in Nupur’s version of the famous and unsolved museum robbery.
—Grace Topping 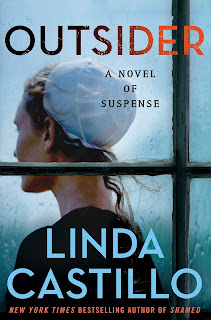 This is the twelfth novel in Castillo’s series about Kate Burkholder, Chief of Police in Painter’s Mill. In her earlier life, Kate was Amish, but broke away from that religious group to pursue a career in police work. In Outsider, Adam Lengacher, an Amish farmer and widower with a young family, finds a car in the middle of a snowstorm with an unconscious woman covered in blood. He contacts Burkholder and takes the woman back to his farmhouse to give her first aid. When Kate arrives, she knows the woman—Gina Colorosa—a police officer from another town and a former colleague and friend. As it turns out, Gina is on the run from other cops. She asks Kate for help, but Kate remembers their past and doesn’t know if she can trust Colorosa. She calls John Tomasetti, her domestic partner and state agent, and together they try to discover the truth. But whoever is after Colorosa is relentless in their pursuit. Will they find and kill her before Kate and John can discover the truth? Castillo uses massive snowstorms in this suspense-filled mystery to make the reader feel claustrophobic and the characters trapped.
—Susan Van Kirk 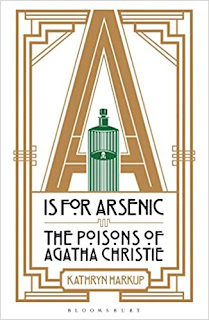 A is For Arsenic by Agatha Christie
I’ve read every single one of Agatha Christie’s books and she reveled in the use of poison to kill off the victims in her books, with the poison itself often being a central part of the novel. Her choice of deadly substances was far from random—the characteristics of each often provide vital clues to the discovery of the murderer. In A is for Arsenic, Kathryn Harkup investigates the poisons used by the murderer in fourteen classic Agatha Christie mysteries. It looks at why certain chemicals kill, how they interact with the body, the cases that may have inspired Christie, and the feasibility of obtaining, administering and detecting these poisons, both at the time the novel was written and today. Scientific enough to be used as a textbook, it’s also a perfect reference guide for anyone writing murder mysteries.
—Judy Penz Sheluk