An Interview with Julie Mulhern by E. B. Davis


“Ellison Walford Russell!” Mother’s scandalized voice made me leap
three feet into the air. “Are you making out over a corpse?”
Julie Mulhern, Killer Queen, Kindle Loc. 210

Another day, another dead woman in Ellison Russell's study.

Only this one claimed to be Mrs. Anarchy Jones.

As Ellison juggles mothers, daughter, unhappy wives, and near-miss murder attempts, one thing is clear—someone will go to any lengths to hide the truth.

Can Ellison and Anarchy catch a killer before the body count rises? Or will Ellison be the next corpse in the study?
Amazon.com 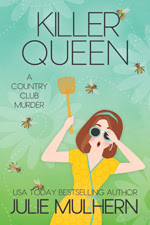 Killer Queen is the eleventh book in Julie Mulhern’s Country Club Murder mystery series, which is set in the 1970s. Julie is one of the most gifted humor writers that I’ve read. Main character Ellison Russell finds herself in the most damning of situations—all of which she has no part in creating. Things just happen to Ellison, and usually in front of her critical mother. Readers cringe for Ellison all the while trying not to burst out laughing. But of course, since Ellison is unaware she has an audience and we fear not that she’ll find out, we laugh out loud.

This time the murder costs Ellison and Anarchy a trip to Italy. Someone’s got to pay, and of course, the killer does.

Were Cobb Salads created during the 1970s or were they just popular then?

Actually, the Cobb salad was created in the 1930s at the Hollywood Brown Derby and named for its owner, Robert Cobb. The salad features lettuce, tomato, bacon, chicken breast, hard-boiled eggs, avocado, and blue cheese. It’s been a favorite on country club menus for decades.

[Neighbor Margaret says to Ellison:] “For almost twenty years, you were dull. You let your husband hide your light. Now that he’s gone, you shine.” (Kindle Loc. 356)
Two pages prior to this quote, Ellison describes Margaret as a witch, along with her black cat, described as her familiar. But Margaret is surprising, isn’t she?

Margaret is prickly and particular and puts up with the goings-on at Ellison’s house. For years, Ellison was a bit afraid of her. Now that Henry is dead, and the two women are getting to know each other, Ellison sees other facets to Margaret’s personality. 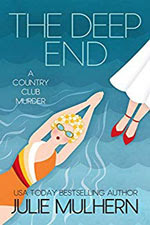 Like the Cobb salad, Bellinis began in the 1930s. The cocktail was invented at Harry’s Bar in Venice (which is why Ellison bemoans not drinking them when her trip to Italy is cancelled). Bellinis consist of puréed white peaches and Prosecco. They’re delicious.

Do you have a theory as why no one makes Bundt cakes anymore?

No theory on that – I still make Bundt cakes!

Ellison gets caught at being a substitute for a bridge game. I know of only one person that still plays bridge. Did it go the way of Bundt cakes? No one has time for it anymore?

I have a regular bridge game and am called upon to sub. As a result, I know LOTS of bridge players and lots of women who are taking lessons.

Ellison only plays golf when her father wants a private discussion with her. But when pressed into defending Anarchy as being suitable for her, she ends up breaking the ladies’ record for the golf course. Does distraction, anger, or decisiveness fuel her game?

Ellison’s amazing round of golf was fueled by anger and luck!

Anarchy’s mother, Celeste, is also an artist. I thought they might have a lot in common paving the way for their relationship. How does Celeste treat Ellison?

While Celeste and Ellison are both artists, they are very different women. Celeste sees Ellison living a life she’s rejected (country clubs, bridge with friends, golf…) and disapproves of her. 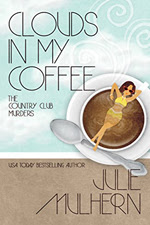 Ellison’s mom represents the staunch old guard. Anarchy’s mother, who represents the new modern feminists, talks about vaginas a lot, in public. Will you play off the two in future books? Will you have us, God Forbid, rooting for Ellison’s mom? (I secretly like her at times. Sometimes, a lot!)

Writing Frances and Celeste together is too much fun not to do it again! Can you imagine them coming up with a seating chart?

Ellison isn’t much of a cook, one of the reasons she has Aggie, her housekeeper/confident/friend. But she can operate her Mr. Coffee. Is that why she talks to him and thinks of the machine as her friend? Or is it more that he always agrees with her?

Before her husband died, Ellison was trapped in a lonely marriage. Before Aggie arrived, Ellison was saddled with a less-than-friendly housekeeper. When Grace left for school in the morning, Ellison had only the dog and Mr. Coffee for company. Even though her life has improved, her relationship with Mr. Coffee remains strong.

How did you pick Sweet Briar as the college of the victim?

Sweet Briar is a beautiful women’s college in Virginia. The college runs a renowned Junior Year in France program which I attended.

What is Sambuca? Why would Celeste assume Ellison had it on hand?

Sambuca is an anise-flavored liqueur that was popular in the 1970s. Unlike Bellinis, I do not find it delicious. In the Midwest, an omelet with cheese, diced ham, onions, and green bell peppers is called a Denver omelet.

Is Pequod the restaurant that originated Chicago-style pizza?

I’m not from Chicago, and even if I was, I would NEVER insert myself into that debate! Pizzeria Uno has a claim to that title as does Rosati’s.

Airline food was actually good in the 1970s?

It was a million times better than it is now.

Ellison kicks her mother out of her house when she claims Ellison is thinking with a lower part of her anatomy and that Anarchy is marrying her for her money. Is it a pivotal moment for Ellison or her mother?

In my experience, over the course of their relationships, mothers and daughters say numerous things to each other they’d like to take back. Forgiveness is key. Ellison may be better at that than Frances…

Ellison’s house has never been fully described. It’s large. There’s a circle drive edged with hostas. And the study defies her attempts at redecoration. 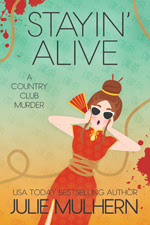 Third-floor ballrooms are not uncommon in the Midwest. In the late 1800s and early 1900s, when families moved from the east coast and built large houses, their architects designed as they would back east. Three stories. On the east coast, the third story was used for servants’ quarters. In the Midwest, servants (the help) didn’t generally live in, so the third stories remained empty. Calling the finished-but-empty space a ballroom sounded much grander than the kids’ playroom.

Do bees have venom like a snake’s? I thought they just stung you, but then what causes the “sting?” Is that the venom?

A bee’s sting stings due to the stinger being injected into flesh. Ouch!

What’s next for Ellison and Anarchy?

I suspect Ellison will find another body…