A Writing Tip from Shakespeare by Leslie Wheeler

When I took a Shakespeare course in college, my professor was writing a book (long since published) on thematic doubling in Shakespeare. Now, Shakespeare, as many of you may already know, was fond of various kinds of doubling: on the stage he had the same actor playing two different roles, and he also took pains to show both the good and bad sides of his characters. Thematic doubling, as the name suggests, involves the repetition of a theme or important idea that infuses a work of literature.

One of the themes of King Lear is parents’ blindness regarding their children. Lear mistakes his two older daughters, Reagan and Goneril, for his “good” daughters, and poor Cordelia for the “bad” one. Gloucester makes a similar mistake when he wrongly chooses his evil, illegitimate son over his good, legitimate son. Thus, one thread of parental folly is echoed by another.

I’ve found myself doing this kind of doubling or echoing in my mystery novels, only later realizing that perhaps I owe a debt to the Bard—never a bad author to emulate. Here is an example. In Rattlesnake Hill, my first Berkshire Hilltown Mystery, there are two love triangles, separated by more than a hundred years, but alike in that each involves two men and a woman, and in each, the woman is killed under mysterious circumstances. My main character, Kathryn Stinson, becomes involved in a third triangle when she falls passionately in love with a man from the second triangle. Sound complicated?  Some readers and reviewers have found it so, one complaining that “This book has a lot of moving parts,” while another described the novel more positively as “intricately plotted.”

I have also used thematic doubling in my latest mystery, Shuntoll Road, the sequel to Rattlesnake Hill. In this book, there are two women who harbor secrets that they fear others will find out about. These secrets are related to the comas experienced by two women, one in the past, and one in the present. Because both of the coma women are friends with my main character, she is able to get a better understanding of what it’s like to be in a coma. More importantly, as someone who feels responsible for having caused the present-day coma, she gains insights about how someone else who was in a similar position might have behaved. If your head is spinning after reading this, you are not alone. I don’t know how many times the members of my critique group suggested I ditch the present-day coma and the secret surrounding it. But I kept both, because I believed these additional elements enhanced the story.

The downside of thematic doubling is that it makes your story more complex and therefore asks more of your readers. But I would argue that it can enrich your book with another layer of meaning. After all, what worked for Shakespeare should be able to work for us, too.

Writers, have you used thematic doubling in your books? If so, to what effect?

An award-winning author of nonfiction, Leslie Wheeler writes the Miranda Lewis Living History Mysteries, which debuted with Murder at Plimoth Plantation, and the Berkshire Hilltown Mysteries which began with Rattlesnake Hill and continue with Shuntoll Road. 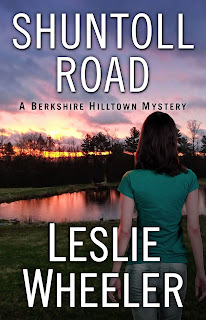 Boston library curator Kathryn Stinson returns to the Berkshires, hoping to rebuild her romance with Earl Barker, but ends up battling a New York developer, determined to turn the property she’s been renting into an upscale development. The fight pits her against Earl, who has been offered the job of clearing the land. When a fire breaks out in the woods, the burned body of another opponent is discovered. Did he die attempting to escape a fire he set, or was the fire set to cover up his murder? Kathryn’s search for answers leads her to other questions about the developer’s connection to a friend of hers who fled New York years ago for mysterious reasons. The information she uncovers puts her in grave danger.