Where Should a Mystery Begin? by Susan Van Kirk

Where Should a Mystery Begin? by Susan Van Kirk

My research is done, and I’m organizing the plot and scenes for a second book about the small town of Sweet Iron, Illinois, with my historical researcher/genealogist protagonist, Beth Russell. This means it’s time for me to deal with what I consider the hardest part of writing a mystery—the first chapter. Where does my story begin? My track record is all about getting that question completely wrong. Multiple times. That is why I have an editor and beta readers.

Consider the first book in the series, A Death at Tippitt Pond. 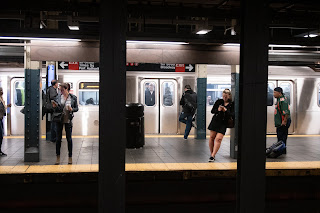 I first began this mystery with a chase across New York City. Exciting, right? Beth lives in the small town of Sea Cliff on Long Island. One evening she leaves the New York City Public Library, where she’d been researching, and becomes aware of a man following her from a distance. Since I’ve never lived in New York City, I relied on a former student who lives in Sea Cliff and works in the financial district. She gave me all kinds of help. I studied videos of Bryant Park at Christmas time, and perused the subway and train systems, studiously figuring out how to make Beth’s connections accurate. It was an exciting race, culminating with the stranger ringing the doorbell at Beth’s apartment. My editor nixed that one. 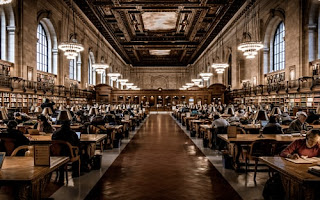 Plan Two. Beth is researching at the Rose Room in the New York City Public Library. Once again, I studied pictures and the organization of the library and made sure I could describe the Rose Room down to the last detail. I even knew that in real life the Rose Room was under construction during Beth’s fictional research, so Beth would have had to work somewhere else at times. In this scene the stranger approaches Beth, telling her an impossible story about how she might be the heir to an inheritance from a wealthy family named Tippitt. He gives her a plane ticket, a bed-and-breakfast reservation, and a date and time to meet the lawyer who wants to discuss this in Sweet Iron. She is skeptical, but it would cost her nothing to go there between research projects. My readers nixed that one. Need more excitement.

Plan Three. Beth meets her best friend, Gabrielle Martinez, at a posh restaurant in Manhattan. I researched restaurants and menus. She tells Gabby about an investigator who accosted her at the New York Public Library concerning an inheritance she was supposedly in line for in a small town called Sweet Iron. Gabby urges her to go and check it out. What would it hurt? They discuss Gabby leaving for Florida with her family for Christmas and how Beth will be alone—once again—for the holidays. This one was big-time nixed. Too much backstory.

Plan Four. Beth has landed in the Quad Cities and rented a car to drive to Sweet Iron. She muses about her meeting in New York City with an investigator and is anxious about what she will find in Sweet Iron. She stays at a bed-and-breakfast and hears a lot of gossip about the Tippitt family (a la The Great Gatsby.) The next morning, she goes to the lawyer’s office to find out about this crazy story. Everyone nixed that one. Too much backstory. My editor said, “Begin in the small town.” That means weeks of research about NYC down the drain. 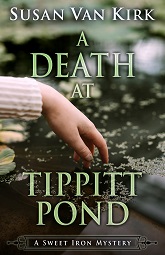 Final plan. Beth Russell crosses the street in the small town of Sweet Iron after gazing at the lovely Queen Anne Tudor home known as Tippitt House. She is admitted by a young woman who says Remington Hatcher, the lawyer, is on his way but will be a few minutes late. She seats Beth in a beautiful room and brings her tea. While Beth is waiting for the lawyer, she remembers her interview with him the previous day, which resulted in a DNA test. Through her mind go the impossible details about the Tippitt family and the mysterious death of her—maybe—biological mother. The family has a great deal of money, enough to order a DNA test from a private lab that can process DNA in four hours. She hears the front door open, the lawyer’s voice, and realizes her hands are shaking. Will his news change her life?

And we have the winner. I haven’t yet figured out a way to do this process backward so I can start with the winner. In fact, consider how much time I wasted researching so many places about New York City. I’m starting on a new book. This will give me a new opportunity to start in the wrong place once again.

Ugh. I feel your pain, Susan. Page one is terrifying.

Good luck with your new book! (And isn't it wonderful to have a support system in place to tell you when you've got it wrong...or RIGHT?!!)

You know how much you've grown as a writer when you can recognize what isn't working as well as what does work. Look how far you've come!

So looking forward to my next visit to Sweet Iron.

Where to start is the eternal question. Trust your instincts, your critique group, and your betas. My experience is the first two chapters are for me, they rarely make it to the final product. No matter how attached I am to them.

This is so helpful! I've been going around in circles on my opening scene. When I wrote my first draft, for the first scene, I wrote "worry about this later" and then moved forward. Now it's later and time to worry about it. Reading the process yours went through is giving me ideas to focus on.

I've been systematically pruning an opening chapter, muttering "later later" as I save snippets of necessary backstory.

My first published novel ended up starting at what was, for the first several drafts, Chapter 3. The first two chapters ended up as a few paragraphs of backstory spread through several chapters.

Best of luck on this latest work.

Thanks, everyone. After reading all your comments, I've decided to write the first chapter and then go back and totally change it later. It has been hard to switch from being an American Literature teacher where context is everything, to a mystery writer where you start in the middle of the action. Then explain later. It's a change of mindset. After ten years, I think I've finally got it. We'll see with the new book.

I always have to fight the urge to create backstory first, since it seems important for the reader to understand the context. I've learned that the reader really isn't interested in the backstory until s/he has met the character and has a reason to be interested.

You are so right, Kathleen. You probably figured that out long before I did. My urge to create a context and meet the characters was always at the forefront of my brain. I keep beating those ideas back.

Well, I'm hooked! I do think you have a winner in that final take, but I did love some of the previous takes. The idea of the mysterious man in the library...very enticing.

It sounds like you went through lots of alternatives and came up with one that worked for you. Congratulations. In my two books I started with dialogue--something lots of people will tell you is a no-no. But it gets me right into the story and a scene that I hope hooks the reader.

Thank you, Shari and Grace. I liked the library scene too, especially since he checked to make sure they had a no gun policy. My heroine is quite a good shot.

Thanks for sharing these! I agree about the last being the right one. "Come to the party late and leave early" is the guideline I try to follow.

Now I need to read the book!