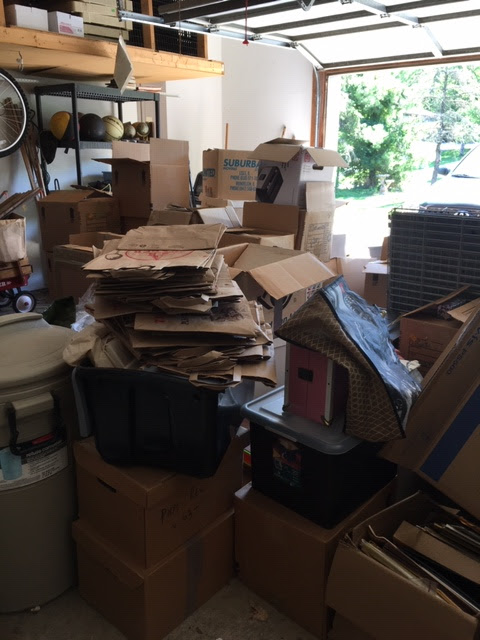 Our annual recycling day, when everything from electronics to paint and chemicals is recycled or safely disposed of, was postponed from May to July. When signs for the rescheduled event went up, I surged with resolve, anxious to reclaim a garage stall that had been packed with boxes of old bills, bank statements, and kids’ academic work since our March 2019 basement flood. Consumed with grim determination in the ninety-plus degree heat, I attacked the boxes, shoving the detritus of the past twenty years into paper Trader Joe’s shopping bags. I saved photos, anything related to my writing, and my husband’s professional files.

I had seen a cozy mystery anthology call on the final submission day, noted the lengthy preferred word count, checked my file of unpublished stories and thought I had nothing that fit—until I went through a box of old manuscripts and found a perfect gem of a story, only fifty words under the minimum! Retreating to the cool of the air-conditioned kitchen, I padded my story with a hundred new words and shipped it off. A frustrating week of dead starts had turned positive. What else could I glean?

I amassed a fabulous collection of plastic organizers and file folders from my many attempts to get organized over the years. As the pile of empty boxes grew taller, the line of packed grocery bags stretched the length of the garage. I added leaky AA batteries to the pile, and broken electronics from the graveyard shelf in the garage. 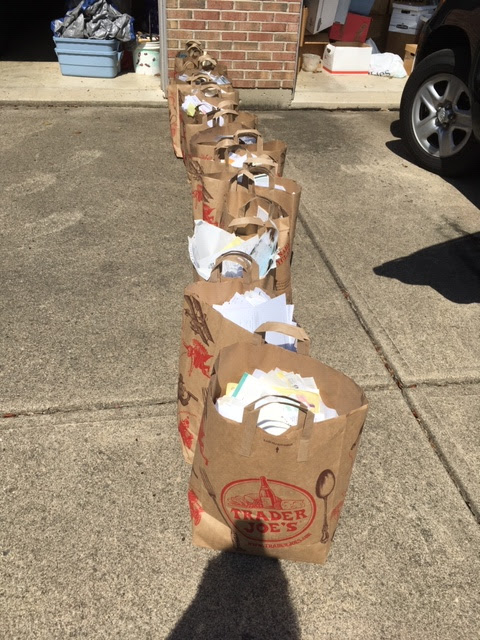 Recycling day arrived, with a hundred people staffing the electronics and hazardous waste stations and commercial shredding truck. Seven minutes after the gates opened, I was twenty-fifth in line for the shredder. Everyone in the village, it seemed, had spent their days during home isolation sorting boxes of bank and medical insurance statements, and cancelled checks. Of course, I scrutinized the shredder as a potential body disposal method. Alas, the body would jam the hopper. My WWK colleague, Kathleen Rockwood, suggested a tree shredder instead. 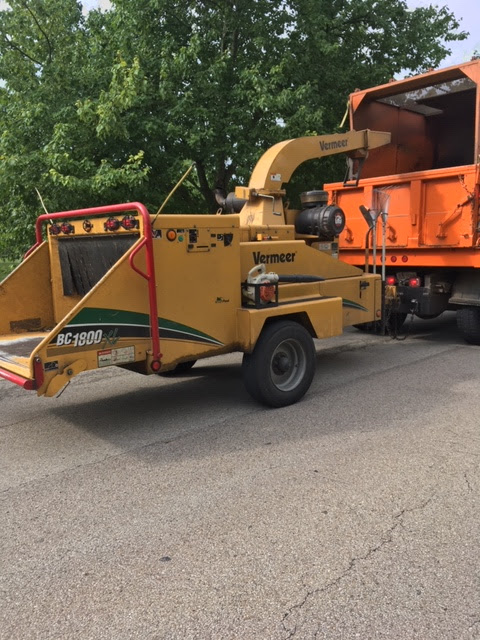 From fifty-odd boxes, I emerged with a few gems, including copies of emails from our chaotic days of three kids going in different directions (“See you at 5:30 at the BP station to swap kids. I’ll do basketball followed by band practice pickup if you handle soccer”). The kids’ report cards and test scores, problem sheets and essays. Notes from the writing workshops I had taught fifth graders to bring them up to middle school standards. The first chapter of a MG mystery I had written, similar to Mary Downing Hahn’s books. My narrative voice hasn’t changed, though I instantly realized my “mom” voice didn’t evoke an eleven-year-old narrator. Various school handbooks detailing both the code of conduct and the serious consequences for breaking the rules, including NO READING ON THE BUS! Based on a lengthy correspondence with the school administration, I had fought that battle and lost.

A box of paperwork related to settling my parents’ estates brought tears. I found real estate flyers from our two previous houses. After admiring photos of my kitchen renovations, I pitched them in the recycling cart. I found an old letter from a childhood friend, meditated how her life had evolved in comparison to mine, and mentally catalogued the emotions it evoked.

After my daily four-hour stint in the garage, I came inside and continued with final revisions on my debut mystery, repeatedly coming up against the same critique from my beta readers: what is your main character thinking? How does she feel? I wanted to write that she craves Greek pizza (feta cheese, spinach, and kalamata olives), dark chocolate, and a glass of chardonnay, but I needed something more elemental and profound. Based on my recent foray into the the past twenty years, I wrote my own “emotion descriptions” for grief, despair, anger, hatred, fear, self-loathing, satisfaction, excitement, acceptance and joy. I had used an emotion thesaurus for my main character’s physical responses and body language in the manuscript. After my garage experience, I was finally able to layer in the final brush strokes of words evoking raw emotion.

Writers, have you ever turned a negative experience into one benefitting your writing? Readers, does detailing a character’s emotions add to your reading enjoyment? 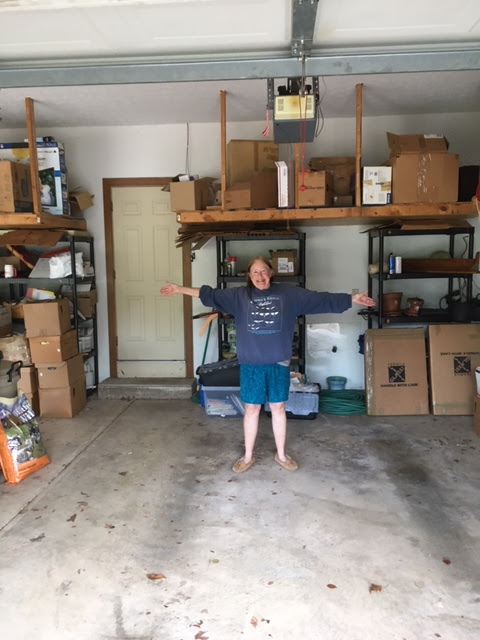 Your first picture looks like my junk room, only neater.

I've done some sorting out, but I can't deal with throwing away good stuff someone else might use, so while our (private, very good) refuse company will haul away things that we're throwing out, I have a growing stack of "to be donated" with no donation places actually accepting anything right now.

When your character rents that tree shredder, have him/her use a fake ID & rent it miles away from where it's to be used. And if s/he's the right type, "borrow" (steal) a pickup truck with a hitch to move it. And if possible, feed the shreddings to some hogs.

How I envy that cleaned out garage! All that stuff gone must feel great.
I also envy all the writing inspiration (and advice - tree shredder, check) you gained from this experience. There's nothing like going back to past writing projects with fresh eyes.
Time for me to Kondo the basement!

What a great feeling to lower this weight (stuff) from your shoulders.

Kathleen, thanks for the tree shredder information! I imagined stalking the village chipper, which roams the streets on Mondays and Tuesdays. I've seen the hog solution on Midsomer Murder, where it was used to great effect.

Shari, I'm not finished, but I can park my car inside. During the process, I marveled at the barely-managed chaos we endured for so many years.

Susan, it's a great feeling, particularly when the derecho went through Monday night. Torrents of rain, but minimal wind.

Great post. I am one of those people who actually shreds (yes, I own a shredder) her income tax files within a week of the 10-year limit (that's how long is recommended in Canada for self employed and businesses, though technically it's 7 years). In the interim, every box of files (the plastic ones with lids) is neatly labelled and stored in our basement storage room. And I don't keep anything that isn't needed.
My hubby, on the other hand, is the total opposite and of course, he can never find anything when he needs it. Drives me nuts. I've offered to organize his files but he won't have it.
I did have a bit about the benefits cross cut shredder (better than strip cut for keeping secrets, as strips can be taped together) in my book, Skeletons in the Attic. What can I say? No research is ever wasted, even if it starts out as a way to help me get organized.

Judy, yes, a crosscut shredder is best. I have one, but it takes so long to shred each health insurance statement, and a small stack of cancelled checks. I have a "to be shredded" shelf in the garage and I'll stalk the next commercial truck in the area. I didn't clear things out before our last move, and as the kids graduated from college, their stuff piled up in our basement.

Congratulations, Margaret! The garage looks wonderful and you have all those wondrous emotions to bring to your manuscript. The perfect combination.

Having just moved from one end of US 1 to the other - Florida to Maine, I can relate, and sympathize.

Thanks, Kait, it's still a work in progress but I can envision the end.

We’ve also done this during the pandemic, but my husband did most of the heavy lifting. �� Unfortunately, there wasn’t too much in the way of memories from long ago. We lost most of them in a fire at our former home. But what a wonderful feeling to be rid of all the clutter and “stuff” we don’t really want or need. Way to go!

I purchased herpes herbal medicine and received it within 7 days and used it as prescribed, I tested negative within 3 weeks use, do not loose hope to contact him early If you need help meet him on his email address dr,chalaherbalhome@gmail.com Or https://
drchalaherbalhome.godaddysites.com ❤️❤️❤️💯💯🌿🌿🌿