My Imaginary Friends by Annette Dashofy

I was reading another blog the other day (OOPS. That is allowed, isn’t it?) when the topic (stuffed animals, blankies, and imaginary friends) sent me off on a memory spiral. Never mind my childhood blankie and favorite stuffed animals. The part that made me start to reminisce was the imaginary friends thing.

I’m not sure how young I was when my imaginary friend, Linda (no last name), moved into our barn, but I remember my mom anxiously insisting that I wasn’t allowed to take her to school once I started first grade.

Nor was I allowed to take my imaginary dog, Lassie (also my favorite TV show), to school. 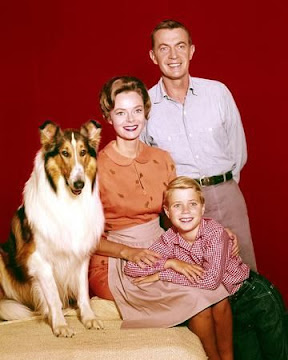 Well, duh. Dogs are never allowed in school. Unless it’s a service dog or maybe on show-and-tell day.

Linda was cooler than I was. She wore funky glasses, while my own were plain and ugly in my mind. Yes, she lived in the barn, but in “our” world, the barn had been renovated into a wonderful residence. We played at her house a lot. She always had cats (barn cats) around. I, on the other hand, wasn’t allowed to have pets inside.

Except for Lassie, whom my mom couldn’t see!

I was vaguely aware of my mother’s concerns. I truly believe she was considering therapy for her young daughter who spoke of this girl and dog who weren’t really there. Keep in mind, I was sixteen years younger than my only sibling, who was away at college, leaving me as an almost-only child. We lived on a farm and I didn’t become acquainted with the one girl who lived relatively nearby until several years later.

Linda was my sole playmate. And since she was always at my beck and call, I was never lonely.

In hindsight, I can see that Linda, her renovated (at least in my mind) barn home, and my collie dog were the first hints at what my future held. Now I make up friends and create houses and assorted structures, where there are none, on a daily basis. I conjure up whole herds of horses, several cats, and an occasional dog. They all go into my stories. And I admit, I find it vindicating when my readers talk to me about Zoe and Pete as if they were as real to them as they are to me.

My mom was still around and aware of my books and readers, at least through the first two in the series. Gradually, she faded into her own world of dementia before passing away prior to the release of No Way Home. I remember the puzzled but pleased look on her face at my first launch party. She never did fully understand my vivid imagination nor my invisible friends, even when they ended up in print.

How about you, readers and fellow writers? Did you have imaginary friends when you were young? Do you think there’s a link to a vivid imagination as a child and your current creative endeavors?

I love this post. As an only child of very strict immigrant parents, I had plenty of imaginary friends, and they helped with the stories percolating inside my head. Fast forward to decades later, and a not-imaginary friend asked me about the book I was writing. As I started to tell her, she began to stare at me, an odd look on her face. Finally she said, "you talk about them as if they were real." And I told her, "They are to me." Because, well, they just are. Good to know I'm not alone! Thanks Annette.

You are definitely not alone, Judy. And isn't it wonderful when a reader also talks about your characters as if they were real?

Yes, and I remember thinking that if I could imagine, then I could write about it. Of course it isn't quite that simple.

It's funny, E.B., I never made the connection between my imaginary friends and my love of writing stories until much much later. And no, it's definitely not that simple.

I used to love to make up worlds. I was Robin Hood's little sister. Annie Oakley's best friend. My imaginary friend thought these wanderings were silly, but criticize. Then there were the adventures taken while sitting in the back seat during long car trips.

I was the oldest of three born in 4 years, and mentally escaped the chaos with my imaginary friends. After I could read, I used my dolls (and later, my friends) to act out scenes from books.

I never had imaginary friends and find this topic fun and fascinating. I'm from the South with a heavy Scot-Irish ancestry which has a storytelling tradition. I wish I could ask some of the good storytellers that I grew up with if they had imaginary friends. My father could talk in rhymes which we as children loved. My guess that that creativity was a result of a talent with language may not be the only source.

I didn't have imaginary friends, but I did put myself in all kinds of imaginary situations that turned into long involved stories.

I thought one of my daughters had imaginary friends, but that was put into doubt when a book came out listing the house in which we lived as haunted. Before I showed her the book, I asked her if she'd ever seen anything paranormal. She said, "Yeah, Mom. Don't you remember? You thought I had imaginary friends that visited me at bedtime. They weren't imaginary."

My other daughter had a penchant for acting out and supplementing the things she read (she read strange things for child--often non-fiction.) For a good while there, the spare bedroom was a French war orphanage for every doll and stuffed animal she could get her hands on.

I'm quite sure my imaginary friends were just that. Not ghosts. I'm almost envious of your daughter. Almost.

What a great blog! Yes, I definitely had imaginary friends growing up. I was the only girl and the youngest kid in my neighborhood. I wouldn't trade that for any other growing up, but it did mean that there were times I was left out of the action either due to age or gender! Imaginary friends filled the gap.

Thanks, Kait! And thank goodness for our imaginary friends!

When my siblings wouldn't play school, my dolls and stuffed toys became pupils . . . and yes, book characters felt like friends, too. Even now, my book friends share adventures with me while I stay safe at home. <3