Corralling 22 authors in four different states to write 18 short stories and 19 articles over the course of ten years and compiling all this into one anthology with only bourbon as the guiding principle is . . . not as simple as it sounds.

In 2008, our Louisville-based writing group, Derby Rotten Scoundrels (DRS), had already published two Kentucky Derby-themed anthologies in quick succession (2004 and 2006, respectively). Feeling confident, maybe even cocky, we decided to jump back into the anthology pool, only this time we would make liquid libation the central theme: bourbon – what’s more Kentucky than that? And the research that would be required for this project appealed to us.

Writers set about creating their stories, the only guiding principle being: it must be a crime story, it must involve bourbon somehow, and it must be 5,000 words or less. Others began research on the non-fiction articles we would use as transitions between each story. These articles would cover historical aspects of bourbon distilling in Kentucky, profiles of distilleries, and a glossary of bourbon terms (angels’ share, devil’s cut, rick house, wort, etc.). We didn’t have to twist any arms to get volunteers to visit distilleries for research. Some of us did our research at home, sampling various brands of Kentucky’s finest spirit to truly immerse ourselves in the topic. The mashing of content began (the gnashing of teeth came later).

As the months progressed, authors brought their work before our group for critique. Stories and articles were reworked and re-critiqued. New stories were submitted. And critiqued. And reworked. New writers joined, eager to participate in the Bourbon Anthology. And so it went, month to month, year to year.

We made progress. Stories and articles were finalized and approved by the group. We had one person who collected all these final versions (in engineering, this is known as a single point of failure). Then life outside our group began to intervene – spouses became ill, some authors became ill, two passed away, and the project fell into a limbo of “one of these days we’ll pick it up again.”

Much research had been consumed when “one of these days” arrived. Slyly, one of our authors invited us (Susan Bell and Elaine Munsch) to lunch, during which lunch we were told “you have a moral obligation to complete this anthology - how can we drop the ball on this project that so many have participated in, sweated over, dreamed about?” Though we weren’t the presumptive leaders of the project, Elaine, being of Catholic disposition where guilt is up there next to Original Sin, agreed to see what we could do. We deemed the first step toward revival would be the purchase of more bourbon, for research.

We then went into detective mode, hunting down a record of who had written what and just where in the world were these hearty souls and where was the final version of their work? Elaine searched the internet, scanning obituaries (we are not a young group). We had to contact every author and ask, somewhat sheepishly, “Hey, remember that bourbon anthology we were working on years ago? Are you still interested in being included, and can you send us your final version if you do want to be included?”

It took another year for us to gather the final stories and articles and to compile all that into one cohesive manuscript.  We breathed a sigh of relief. The next step would be easy, we told ourselves: find a publisher. Because fools rush in where angels fear to tread.

We decided to submit to one publisher at a time. We got good feedback from that first publisher submission, but after waiting two months for a response, the answer was “sorry, this doesn’t fit our catalog at this time.” We tried a second, then a third publisher, and watched as the months dwindled away again.

After our third “No, thank you”, we finally got our “Yes”, from Mystery and Horror, LLC, a small, independent publisher out of Florida. We were ecstatic!

With a publication date set for June 2020, Elaine and I began marketing preparations – where should we have the release party, where can we do signings? We applied to the Kentucky Book Fair. We were very excited.

Then the Publishing Gods stepped in and said, “This has all been too easy for you, so we are going to drop a Global Pandemic on your head.”

So here we sit, self-isolating, our writing group not meeting out of virus fears, large events on hold or cancelled. But our book is published and is available via Amazon or Barnes and Noble. We are still waiting for word from Kentucky Book Fair – were we accepted? We don’t know yet. Will the book fair even take place this year? We aren’t sure. The only thing we know for sure is: we find, through extensive research, that Kentucky bourbon is awesome! 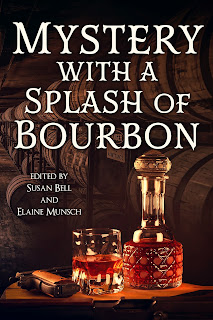 Elaine Munsch grew up on the shores of Lake Erie, but has made Louisville, KY her home for several decades. An avid reader, bookselling seemed to be the ideal profession, which she has practiced for over forty years. She is the author of the Dash Hammond series: The Price of Being Neighborly, The Cost of Kindness and The Expense of Family.

Susan Bell was born in coastal California, then proceeded to travel the country in her role as daughter of a Naval officer. She learned to walk in the Mojave Desert, to swim in Virginia Beach, and to read in Washington State. She fell in love with Dr. Seuss and hasn’t stopped reading since. She combined her love of reading, writing and arithmetic and became a technical writer, working in the defense, aviation, and telecommunications industries. With deep roots in the Bluegrass State, she now calls Louisville home.