Writing Just For Myself By Heather Redmond 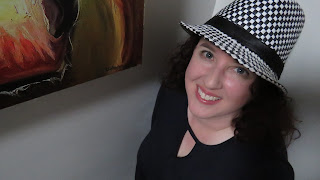 I started writing the first book of my contemporary cozy mystery series, the Journaling mysteries, for fun. I had switched to writing mysteries and discovered that my publisher only wanted one book a year, whereas I’d been used to writing a few a year in romance. I had a hole in my schedule. Idle hands make mischief, as we all know. I didn’t even tell my literary agent.
Because Journaled to Death was just for my own entertainment, I referred to the list of possible sleuths for future series that I’d been keeping in my journal and combined a couple of the ideas into a complete character. My journal, you ask?
I had begun to journal in October of 2017 after following bullet journal YouTubers for several months. Ryder Carroll developed the bullet journal method, a simple yet complex way to download busy brains and reduce stress, and wrote a book about it, The Bullet Journal Method, a New York Times bestseller. I purchased my first Leuchtturm1917 journal directly from his website, and started with a few spiderwebs around what’s known as a habit tracker.
I was attracted to the artsy aspects of journaling immediately. While Ryder Carroll’s system is flexible, many of the social media personalities I followed focused on the even more basic journal style of any sort of calendar/to-do list, surrounded by a lot of prettiness.
Once I discovered Instagram in the spring of 2018, all hope was lost. I had officially moved from purely the written word as a creative outlet to all things visual. I took photographs everywhere. I developed the sticker-purchasing habit of a seven-year-old girl. I even learned to paint. Approximately five days after I posted my first picture of a pretty tree on Instagram, I started working on a mystery featuring my barista-by-day, social media personality-by-night heroine, Mandy Meadows.
Since I was amusing myself, I stole freely from my own life and that of my friends. I dictated those initial chapters, sending words directly from my brain onto the page. The heroine had a last name from my family tree. Her home is a mix of the house I grew up in and a very long-time friend’s. The book is set in Seattle where I grew up. And Mandy is a barista in a hospital, spending her forty hours a week in a location I know extremely well as a consumer of hospital coffee bars. Oh yes, and she’s a journaler, making her second living selling her art and her knowledge online.
That part is aspirational for me. I’m just not that good, but Mandy is, enough that she can mostly cover the expensive mortgage her lazy ex-husband left her with after the divorce. I’m happy to say that while I do have one child, just like Mandy, I don’t have the lazy ex-husband I gave her. I leaned into the trope of single women in cozy mysteries. Many contemporary heroines are divorced, widowed, or never married, allowing us writers to give them a little romance in between finding corpses. It’s helpful if they date law enforcement professionals.
Personally though, I love a good love triangle, or something close to that, in my cozies. From Janet Evanovich’s Stephanie Plum to Krista Davis’s Sophie Winston, I extra heart the books with more than one attractive male around.
My new series has cops…and doctors. Just sayin’.
I also needed the initial spark of a corpse. I combined my jumbled thoughts about all the cousins I’d been acquiring with my genealogical hobby, remembered stories of alcoholics who lived makeshift lives in relatives’ homes, and added a tragic story from other friends’ lives, wherein someone stumbled down their basement steps and died. There he was, a victim torn from my recollections.
Of course in this case, someone actually had to kill the unfortunate victim. I had a great deal of fun puzzling that out, and I hope my readers enjoy following the web of clues along with Mandy Meadows.
About the book 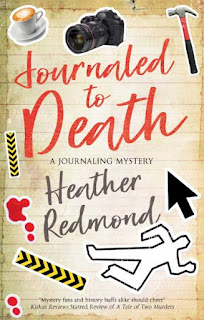 Journaled to Death is available on Halloween in the UK and February 1st in the US.
Journaling vlogger Mandy Meadows strives to preserve her hyper-organized life while searching for her cousin’s killer in this twisty mystery: first in a brand-new series.

Divorced single mom Mandy Meadows scrapes by working as a barista and receiving payments from her cousin, Ryan, who rents her basement apartment. At night, she and her teenage daughter Vellum run a successful home business creating journaling content on their popular social media channels.

But Mandy’s carefully organized world is about to come crashing down. While filming their latest journaling tutorial, Mandy and Vellum hear a loud noise on the basement stairs, and Mandy is horrified to find Ryan dead on the landing. The police quickly start to treat the death as a murder – with Mandy and Vellum as chief suspects. Why would someone murder Ryan? Determined to clear their names and find Ryan’s killer, Mandy soon discovers he wasn’t the man she thought he was . . .
Learn more at https://heatherredmond.com/books/journaled-to-death/
Heather Redmond is an author of the A Dickens of a Crime and the Journaling mysteries series. First published in mystery, she took a long detour through romance before returning. She is a member of Sisters in Crime and International Thriller Writers. Find her at https://www.heatherredmond.com and https://www.heatherhiestand.com.
Posted by E. B. Davis at 12:00 AM

Sounds like a way to get organized--something I could truly use.


Writing to please yourself first is the way to go, as far as I'm concerned.

Congratulations on your new release! I'll never be as organized as I want to be, but some great plots and characters have appeared out of the chaos.

Thanks for hosting me today, and thanks for the congratulations!