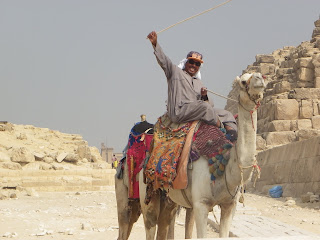 When I was in elementary school, My Weekly Reader regularly featured updates on the Abu Simbel restoration and creation of Lake Nasser as part of the new Aswan dam project. My childhood fascination with Egyptian temples and tombs is still with me, and to celebrate a major anniversary, we signed up for a 19-day tour of the two countries.


Because I’m a mystery writer, I spent the summer reading crime fiction set in Egypt: archeologist Elizabeth Peters’s late nineteenth century cozies with intrepid explorer Amelia Peabody finding mayhem and murder at her husband’s tomb excavations, and Agatha Christie’s Death on the Nile, with Hercule Poirot investigating a puzzling murder aboard a Nile cruise ship. I added John Fowles’s Daniel Martin, a literary novel set, in part, in Aswan and on a Nile cruise. 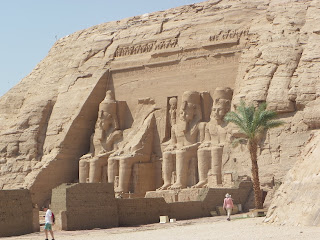 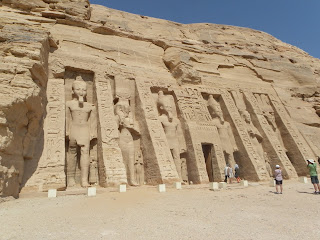 Abu Simbel fulfilled my childhood expectations of majestic grandeur, the four enthroned statues of Ramses II wearing the double crown of Upper and Lower Egypt. The evening Sound and Light Show was spectacular. Unfortunately, Ramses II spent his long reign as pharaoh erecting monuments of himself in every village in ancient Egypt, much like a certain contemporary head of state. 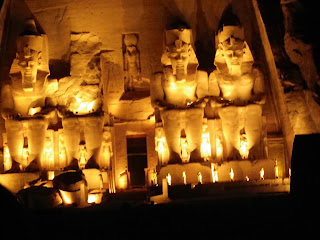 Agatha Christie’s husband Max Mallowan was an archeologist. She probably drew upon her knowledge of ancient Egypt when she described Poirot’s visit to Abu Simbel in Death on the Nile: “The steamer was moored to the bank and a few hundred yards away, the morning sun just striking it, was a great temple carved out of the face of the rock. Four colossal figures, hewn out of the cliff, look out eternally over the Nile and face the rising sun…There was an inner sanctuary where sat four figures eternally presiding, strangely dignified in their dim aloofness. Before them stood Linnet and her husband. Her arm was in his, her face lifted—a typical face of the new civilization, intelligent, curious, untouched by the past.” (Death on the Nile, ch. 9, pp 556-8). 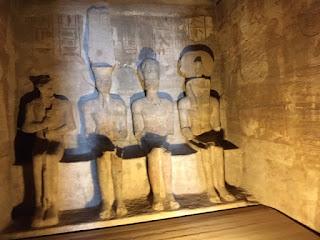 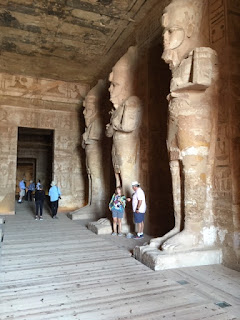 In Daniel Martin, Fowles describes the reconstructed Abu Simbel from Daniel’s jaded, Hollywood screenwriter perspective: “The flight south, over the moonscape and amoeba-shaped islands of Lake Nasser, the limitless rippling dunes of the Nubian desert, was spectacular enough; and at first sight, the resurrected temples also. But very soon they seemed factitious, a quite literally monumental waste of effort and money. Dan felt it most strongly inside the artificial hill raised to buttress—once more—the megalomania of Ramses II. Inside, it was a vast iron-plated cupola, a maze of steel ladders, generators, machinery…yet more misguided ingenuity, Ramses redoubled. It reminded him of a stage on a move-lot; of the expensive artifices of his own profession. (p.553). 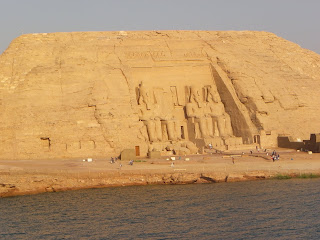 We spent two days traversing the 350-mile length of Lake Nasser aboard the Prince Abbas, a reproduction thirties Nile cruise boat. Other than the ruins of three temples, we could see nothing except sand, rock, and water. Not a scrap of vegetation, or one of the 43,000 man-eating crocodiles inhabiting the lake. 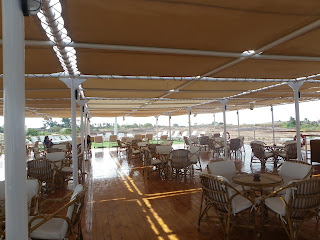 Christie describes a similar boat in Death on the Nile: “Since the boat was not full most of the passengers had cabins on the promenade deck. The entire forward part of his deck was occupied by an observation saloon all glass enclosed where the passengers could sit and watch the river unfold before them. On the deck below was a smoking-room and small drawing-room and on the deck below that, the dining-saloon. (p.545) 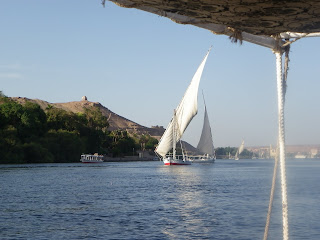 In Aswan, we took a felucca ride past the Old Cataract Hotel and the terrace where Christie wrote Death on the Nile. She also lived and wrote in the Winter Palace Hotel in Luxor. 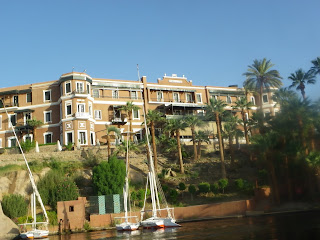 We made the journey from Aswan to Luxor on the Nile in two days. Fowles describes Daniel’s journey: “Its waters seemed to reach not merely back into the heart of Africa, but into that of time itself. This was partly the effect of the ancient sites, and of the ancient ways of life of the fellaheen villages and fields they saw as they passed: the minarets and palm-groves, the women with their water-jars, the feluccas, the shadoofs and saqiyas—the great gaunt poll dippers, the water-wheels ringed with earthenware pots and driven by a donkey or an ox; but its origin lay in something deeper, to do with transience and agelessness, which in turn reflected their own heightened sense of personal present and past..” (p.493). 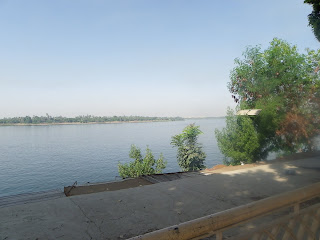 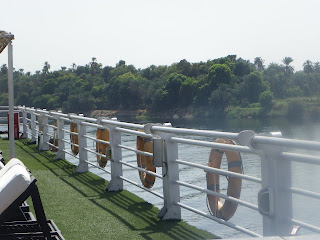 Elizabeth Peters writes of Amelia Peabody’s reaction to the temple of Queen Hatshepsut in the Luxor area. “When I first beheld the site, only a few unimpressive fragments of the structure were visible amid huge heaps of piled-up sand and rock and the tower of the Coptic monastery which had given the place its name. Several seasons of work by the Egypt Exploration Fund had stripped away the covering, including the monastery, and exposed on of the most beautiful and unusual temples in Egypt—colonnades rising in successive steps toward the frowning cliffs that framed them, ramps leading toward the rock-cut sanctuary. ‘In my opinion,’ I said, as we stood before a series of reliefs depicting the queen’s birth, ‘Hatshepsut ought to be adopted by the women’s suffrage movement as its patron saint or symbol.” (The Hippopotamus Pool, p.108-9). 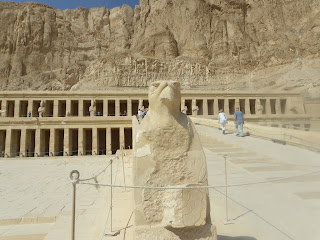 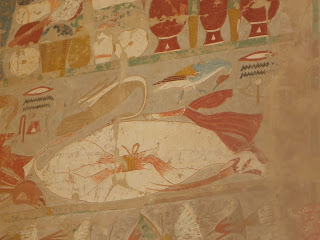 To complete my Egyptian experience following the footsteps of Amelia Peabody, I climbed not only through the Great Pyramid to the central burial chamber, but through several tombs in the Valley of the Kings and Queens. In Amelia’s immortal words, “The darkness was intense…The tomb entrance had been cut in the side of the gully. It was approximately six feet square, but was filled with rubble except for a narrow tunnel dug by thieves. The light came from the far end of the tunnel. With the aid of the holes in the rock face—which, I began to believe, were not natural but man-made—I got into the tunnel. Crawling as fast as possible, I was only vaguely aware of the sharp stone scrapes that scored by hands and knees. I emerged somewhat suddenly into a small, dimly lit chamber…Though archaeological fever burned hot in my brain, at that moment I had eyes for no other object than Emerson. He lived!” (The Hippopotamus Pool, p.153-4). 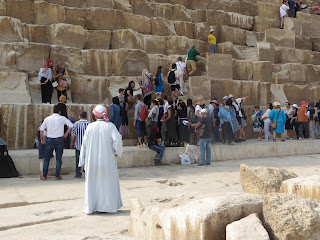 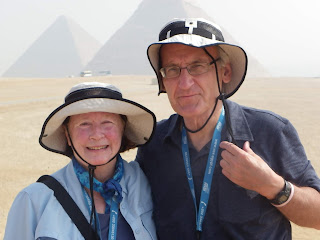 As an overview of the trip, I’m posting a photo a day on Facebook and Instagram. It will take months to fully absorb everything we saw and learned not only about ancient Egypt and Jordan, but the current political and economic scene in those two countries.


Readers and writers, have you ever visited a place you fell in love with as a child? 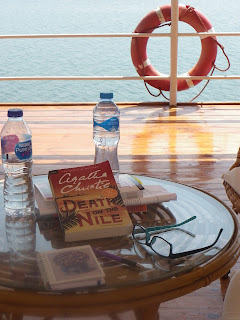 Margaret, what an amazing trip! My dream trip wasn't as exotic as yours, but as a child, I always dreamed of seeing the west. Having never been farther west than eastern Indiana, I longed to see "real" mountains. I got my wish in 2013 and have returned every year since.

Exciting to finally visit your dream place! So much of our focus is the east and west coasts, we forget how glorious and empty the Rockies are.

Margaret, how wonderful for you to share this fantastic trip along with passages from other writers who have visited! I'm looking forward to continuing to see your posted photos! I've traveled to the Maritimes, in the American west, and through Michigan. Each location has special memories. It's great to be hearing your experiences.

What a great adventure! Thanks for sharing it, especially the wonderful photos.

Paula, your adventures must have been wonderful! Nova Scotia is on my list (ancestors from Wolfville) and PEI (Anne of Green Gables).

Thanks, Kathleen, I'd love to read about your adventures in Africa.

I share your fascination with ancient Egypt, Margaret. My husband and I spend time there a few years ago. My interest was sparked by my father. I can still see the rapt look on his face as he told me the story of Howard Carter's first glimpse inside Tutankhamun's tomb. "What do you see?" asked Lord Carnarvon, his patron. "Wonderful things," replied Carter. Over the fireplace in my library I have a 19th-century oil painting my father bought. The title is "Edfou From the Nile." As we passed Edfu on our boat, I searched for the scene but never found it. So much in Egypt has changed. And so much remains the same.

Connie, I looked it up. Edfu was not moved during the final Aswan Dam project, but your view from the river might have changed (river course, vegetation). We approached Edfu and Kom Ombo from the river.

We visited Valley of the Kings, where active digging continues. The tomb paintings were outstanding. While we were in Egypt, a large cache of mummies was found in the greater Luxor area. So exciting!

Hi Margaret, I thought of you when that cache of mummies was found! What a spectacular trip. I love that you also saw Egypt through the books of Christie and Elizabeth Peters.
I'd always longed to see Paris and went twenty years ago. I was not disappointed (understatement) and Iong to return. I bet you are dying to get back to Egypt!

Shari, Paris is magical and I still need to visit Monet's gardens at Giverny.

Egypt is building a new artifact museum near the Giant Pyramid and Sphinx, opening in 2020. I would love to see the new, state-of-the-art museum. With the planned Sphinx airport, there won't be much left to see in Cairo. Luxor, Aswan, and Abu Simbel are all accessible by air, though the boat trip from Aswan to Luxor is well worth the trip.

Margaret, what a marvelous adventure you had! I love it that you followed the footsteps of your literary heroes and heroines. My husband spent some time in Egypt a few years ago and took some stunning photos, especially of the Royal Museum, but he was there for work, so he didn't get to experience as much of it as you did.

The setting I always most wanted to visit was Middle Earth, so it seems unlikely I'll be making that trip, though thanks to Peter Jackson, there is now a lovely Hobbiton in New Zealand.

I look forward to watching your adventure unfold on Instagram!

Thank you for your post. My husband and I are taking a similar trip,in February. After seeing your photos I’m even more excited to go.

Thanks Beth! I hope you visit New Zealand one day.

Nancy, have a marvelous trip! Mid to late October, our daily temps ranged from 90 to 105 degrees F. Your weather will be cooler, especially at night. On Lake Nasser, we went up top for some wonderful star-gazing. No lights of any kind nearby.