September 11 is one of those dates. We all vividly recall the moment we first heard the news. Even years later, the emotions surface with little provocation, which may be why I’d never visited the crash site of Flight 93 despite it being less than two hours from my home. Every time I’ve passed the exit on the Pennsylvania Turnpike, I’ve said, “I need to go there someday.”

As an alumnus of the FBI Citizens Academy, I was offered the opportunity to join a private tour of the National Park. With my good pal, Liz Milliron, along as a guest, I made my way to the site, which wasn’t as easy as one would think. No one simply stumbles across this park. Even my GPS took us to two different incorrect locations before we found our way there.

But the memorial was well worth the effort.

Symbolism is everywhere, beginning with the 40 passengers. Their individuality is celebrated. So is the way The Forty came together to become one. The numbers 40 and 93 are repeated throughout the park as are diagonal lines, symbolic of the hemlock trees that grow near the crash site.


First, a little background history, not all of which I knew.

Flight 93 took off at 8:42 a.m. after a roughly 25-minute delay. That delay was crucial to how everything turned out. By 9:28, when the terrorists on board took over, the first two planes had already struck the Twin Towers.

The first three hijacked planes each had five terrorists on board. Flight 93 only had four because their fifth man had been detained days earlier in Miami. Two of the Flight 93 terrorists took over the cockpit. The other two stood guard at the front of the plane after forcing the passengers and crew to the rear. While we can’t know for sure, it’s widely assumed the fifth man would have been assigned to keep an eye on the captives.

The terrorists told the passengers they’d be released once demands were met, just like every other hijacking of the time. However, since the terrorists were a man down and had no one to watch them, The Forty started making phone calls to loved ones. They learned in these phone calls that this was anything but a standard hijacking.

Had the flight taken off on time, they wouldn’t have known and likely wouldn’t have attempted to retake the plane. And the plane would have crashed into its target in Washington DC.

We know a lot more about what transpired aboard Flight 93 than about the other three flights. Both Flight 93’s cockpit recorder and flight data recorder were discovered intact, and data was retrieved from them. Such was not the case in any of the other crashes. So the voices of the hijackers and the sounds of the passengers trying to retake the plane can be clearly heard.

The visitors center displays the timeline of the day’s tragic events, the news reports, artifacts retrieved from the ashes, and offers recordings of three phone messages left by the passengers on their loved ones’ answering machines. 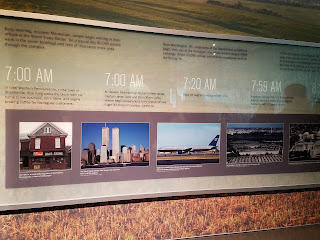 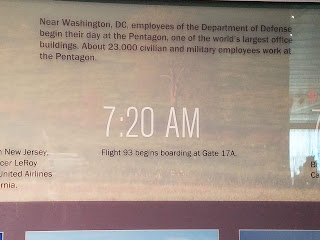 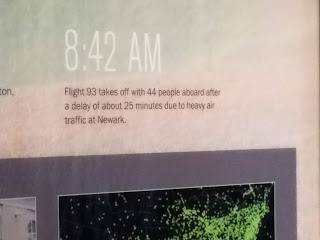 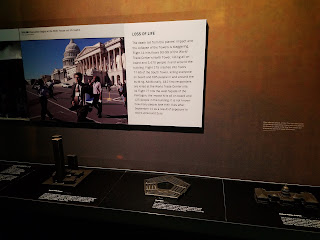 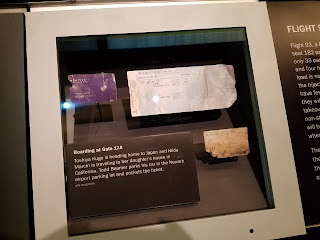 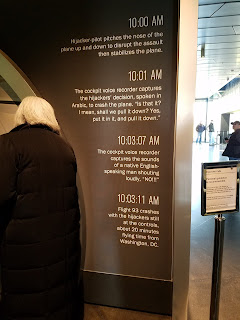 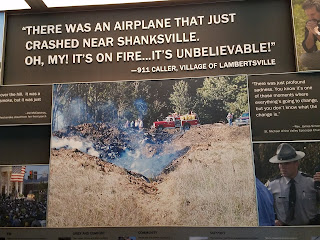 We walked the flight path, which is a striking memorial exhibit carved with the diagonal lines I mentioned earlier. The timelines of the crashes are also engraved in the walkway. The walls are designed to focus attention on the site of the crash rather than on the parking lot or the buildings in the park. 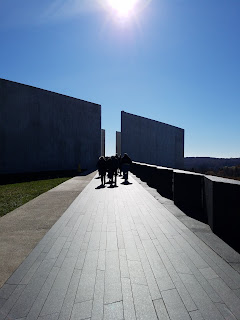 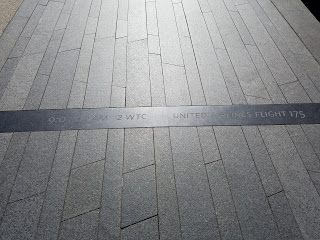 Once we reached the overlook at the end, the same walls block the backward view as well, keeping all attention on the flight path and crash site. 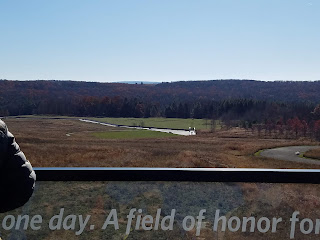 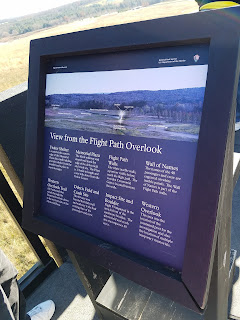 The plane hit soft, surface-mined ground in a manner similar to dropping a marble into a sandbox. The unused fuel hurdled into the stand of hemlocks, setting a semi-circle of them ablaze.

At the edge of what was the debris field, a memorial to The Forty has been erected. Continuing the symbolism, viewed from a distance, it appears to be one solid white marble wall. 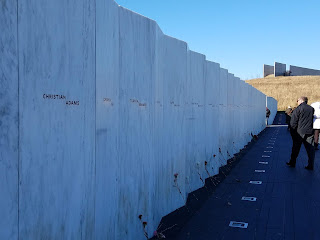 But as we got closer, we could see there were 40 individual marble slabs, each engraved with one of the passengers and flight crew’s names. Forty individuals. One heroic action.
One last exhibit remains incomplete. The Tower of Voices, designed with the diagonal lines representing the hemlock, is 93 feet tall and will contain 40 windchimes, all tuned to a different pitch, again representing forty individual voices creating one song. 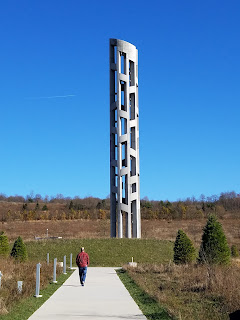 Unfortunately, there have been engineering issues, and at this writing, only eight windchimes have been installed.

I definitely intend to go back and spend more time at this haunting, somber, yet beautiful site. If you get a chance, go.

Here's a video clip I shot while standing at the edge of the debris field.

Hard to type through the tears. Thank you for sharing, Annette.

Thank YOU, Kait. Yes, it's impossible to experience this memorial without shedding tears.

It was an amazing, yet somber, day. Thanks for letting me tag along.

I was happy to have you along on the ride, Liz! Having company makes getting lost a little easier. :-P

A monument to people who realized they were going to die, and decided to save countless others by taking action. True heros.

KM, one of the most heartbreaking parts of the exhibit is the recordings left by three of the passengers and crew on their loved ones' answering machines. The sorrow in their voices of only reaching a machine as they said their goodbyes and "I hope to see you later" when you can tell they knew they wouldn't...ripped my heart out.

My niece's husband is the park manager for the memorial.