An Interview with Barbara Ross by E. B. Davis

“If your mom understands your job, you don’t have a very good one.”
Barbara Ross, Nogged Off, Kindle Loc. 213

‘Twas the week before Christmas, and Julia Snowden’s escape from New York has just hit a snag. Fresh off accidentally poisoning half her colleagues with her “Killer Eggnog,” Julia’s would-be subletter, Imogen Geinkes, is now jobless and homeless—leading Julia to invite the young woman home for the holidays in Maine. But when they unload the rental truck in Busman’s Harbor, they find something that wasn’t on anyone’s packing list: the body of Imogen’s former boyfriend.

Suddenly, the wordplay in Imogen’s name—“I’m a jinx”—isn’t so adorable. But for all the calamities that follow in Imogen’s wake, Julia’s certain she’s no killer. As Julia digs into the case, the appearance of the ex’s brother—his identical twin—doubles the confusion. Has Imogene been double-crossed by an evil twin? Was the eggnog “accident” no accident at all? If Julia doesn’t unwrap the murderer’s true identity soon, one of the twelve days of Christmas could be her last . . .
Amazon.com 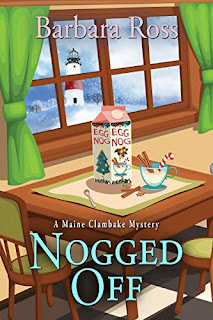 Nogged Off was originally published in Eggnog Murder, a volume containing novelettes by Leslie Meier, Lee Hollis, and Barbara Ross in 2016. As of the beginning of October, if you have Kindle Unlimited, you can read Eggnog Murder for free. If not, Kensington rereleased Nogged Off as a single title on October 29th. If you haven’t read Barbara’s Maine Clambake mysteries, this title should be read as book 4.5, between Fogged Inn and Iced Under.

Main character Julia Snowden is too damn nice, which gets her into a lot of trouble. Sharing her family and their Christmas with someone she only knows on paper proves to be dangerous. There are gripping twists to the plot and characters that forced me to stay up past my bedtime and finish the book. There are lovely cozy elements—but then there’s also a psychopath and Julia’s apprehension—which is to say, Barbara provides nice contrasts allowing you to sink into your cozy-cushioned sofa while experiencing that nervy tingle at the back of your neck.

How does Imogen end up coming home to Busman’s Harbor with Julia?

Julia finds the subtenant in her Manhattan apartment, Imogen, jobless, boyfriendless, estranged from her parents, and now unable to pay the rent. Imogen wheedles Julia into taking her to Julia’s home in Busman’s Harbor, Maine, to experience a true New England Christmas.

From what Julia can gather, Imogen gets financial help from her parents. Although she’s just out of college, doesn’t Julia wonder if Imogen is a spoiled brat?

Julia definitely thinks something is up with Imogen, but she can’t quite figure out what.

Is L.L. Bean open 24/7 all the time or just around Christmas?

Although Imogen is young and dismayed, she’s also irritating to Julia and her pregnant sister, Livvie. How is Imogen irritating? Why isn’t their mother affected?

My brother once referred to someone as “the son my mother never had.” Of course, she had a son—my brother! This person was irritatingly ingratiating. My mother ate it up, but it drove my brother crazy. I sort of modeled Imogen’s relationship with Julia, Livvie, and their mother on that relationship.

I was surprised to learn that during Julia’s formative years, the Snowdens didn’t have Christmas in Busman’s Harbor. Why not?

Thanksgiving belonged to Julia’s dad’s family where they celebrated with grandparents and many aunts, uncles and cousins. But Julia’s mother, an only child, couldn’t completely abandon her widowed father. Every year, they would make the long trek to his apartment in New York City, even though he wasn’t someone who comprehended the kind of Christmas two little girls might expect. Julia’s parents did their best to make the grim little holiday into a celebration.

Julia acknowledges that Livvie’s unexpected first pregnancy actually pulled the family together. How did this happen?

I think this may be common in families. Everyone is devastated when a teenager becomes pregnant, but that bundle of joy gets everyone to rally. In Livvie’s case, it hasn’t worked out so badly. She’s still married to the baby’s father, and they’ve turned out to be wonderful parents.

Imogen appears to be a jinx or at least very accident prone. Why would her parents name her Imogen Mary Ann Geinkes, which seems to spell out—I’m a jinx? Is it a coincidence?

I guess it must be, since they couldn’t have known about her ability to rain trouble down on everyone she meets when she was an infant—or maybe they did.

I don’t think identical twins are indistinguishable to their mothers or wives, close relatives or good friends. But Julia has just met them and has only seen one of them when he was dead—but which one?

What are mirror-image twins?

Wayne and Wade are mirror image twins. One is right-handed, the other left-handed. One’s hair parts on the right, one on the left. It’s like looking at yourself in the mirror. This only happens if the fertilized egg splits in two a very specific number of days after conception.

What is a Gentleman’s Night at Christmas time? Pajama Shopping Day?

These stories are based on real celebrations in Boothbay Harbor where my husband and I used to own a home. Men’s Night (the real name) is a night the stores are open late. It used to be a time for men to buy holiday gifts for their wives and sweethearts, but now it’s a more general holiday celebration. There is also Early Bird Shopping Day when the shops open at 6:00 a.m., offer big discounts, and everyone shops in their pajamas. Really.

What is the difference between a sociopath and a psychopath?

The best explanation I have heard is that sociopaths are hot and psychopaths are cold. Both have trouble feeling empathy and emotion. A sociopath seeks emotional stimulation by ensuring everyone around them is upset and in turmoil. They’re the neighbor who drives all the other neighbors crazy, the relative who spoils every family celebration. Psychopaths on the other hand can be intelligent and charming. They wear the mask of someone just like you, but they are not.

Julia observes to solve crimes, but she also is intuitive. Is that like a sixth sense?

Do the Snowdens get to celebrate Christmas on their own?

The Snowdens celebrate Christmas Eve with extended family, friends, and neighbors. Christmas Day it’s just them—and Chris, Julia’s boyfriend who has adopted and been adopted by the family.

Loved Nogged Off when it appeared in the Egg Nog Murders. Then as now, it kicks off the holiday season for me. Time to start reading Christmas themes!

Congratulations on your new release! Halloween is over, so let the Christmas reading season commence!

Interesting. I had never heard of mirror-imaged twins, and I have to sets of twin grandchildren. Great interview.

Unfortunately, the murderer reminded me of a family member--one of the reasons I asked the difference between sociopath and psychopath. The cozy elements outweighed the sinister so I loved reading Nogged Off, but that something to remember--even when you think you are writing fiction, you may be writing someone else's reality.

Sounds like an intriguing story, and great for the beginning of the Christmas season.

Thanks so much to Elaine for the interview. She asks the best questions.

Margaret--Christmas season seems to start earlier and earlier, but I say, bring it on! In Maine it gets dark now by 4:30 so anything to bring on the twinkly lights.)

E.B.--A book I recommend is "The Sociopath Next Door" by Martha Stout.

Thanks, KM. I hope it is intriguing.

Fun interview. Thanks for the information.

Fun interview. I saw you in the distance at Bouchercon. Sorry I didn't get a chance to chat with you there.