WEDNESDAY
I flew there on Wednesday and checked into my hotel, the Hyatt Regency Reunion Tower. Although I lived in Dallas for nearly 20 years and have been to Reunion Tower at least once, I don’t remember the hotel and the entire city looked unfamiliar. They’ve built—and are building—so many new skyscrapers since I left well over 15 years ago. 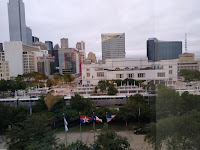 I’ll admit the conference was bewildering to me. I never did find a good map and used this one from the huge tome I got when I checked in Wednesday. There was no map in the schedule I carried around. It felt like I walked a thousand miles! 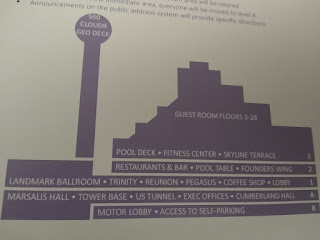 THURSDAY
I had breakfast Thursday morning with a good friend from Dallas, Sarah Weiss.

My panel, on self-publishing, was that morning at 9:30, but I don’t have any pictures of it. 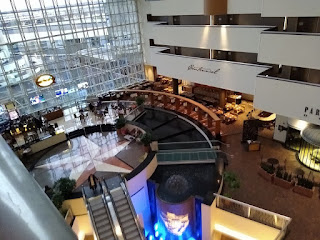 I do have pix of two other panels I attended that day, both short story panels. I didn’t sell any books at the conference since I couldn’t get them into the bookstore until after my panel and my signing, due to miscommunication between the hotel and the conference, I was told. That was quite disappointing.

There was a Guppy gathering later in the day (I neglected to get photos) and Denise Tiller and I ended up at the bar together.

FRIDAY
Friday started with the Sisters in Crime breakfast. There were some pictures there—this one of Ramona’s Facebook Sprint group, but I didn’t make the Guppy picture, unfortunately.


I attended the awarding of the Bill Crider Awards, since I was a judge for those. It was great to see Joseph S. Walker win the award, since he also had an excellent story in my own anthology in 2017. 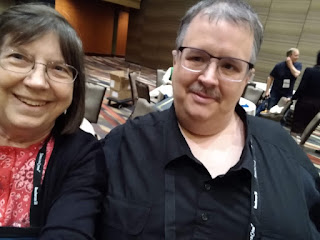 Me and Joseph Walker above. The short story awards people below, Paula Benson, an important man whose name I forgot, Hank Phillippi Ryan, Gigi Pandian (speaking), and Kevin Tipple 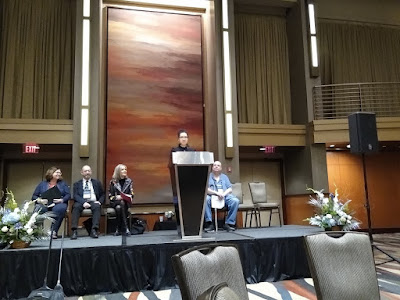 Alan Orloff took the Derringer for Best Short Story. Here he is, on the right, with Brian Silverman, nominee for Best Novelette, and another writer whose name I can’t remember. 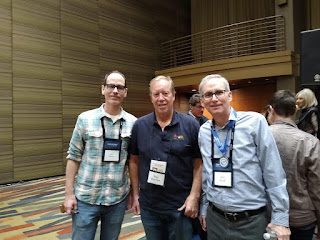 
Sandra Murphy and Nancy West joined me at the bar that night. 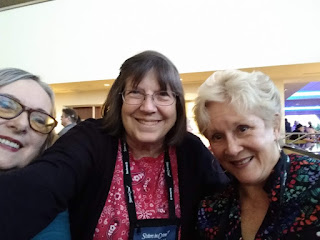 Cheryl Hollon and I went to the Denim Party, which included some BBQ, but very little line dancing and the bar closed very early. It included a surprise live auction, but no one knew what the items were so the bidding wasn’t brisk.

I took shots of the daytime view from my room and the two panels I attended, Deep in the Heart of Texas at 11:00, and Anthony nominees at 4:00.

I attended the Diamond Party Saturday night and it turned out to be a dinner, much to our surprise. 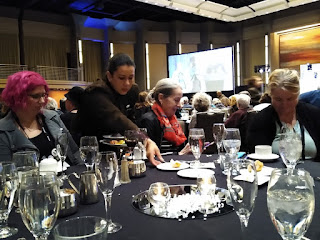 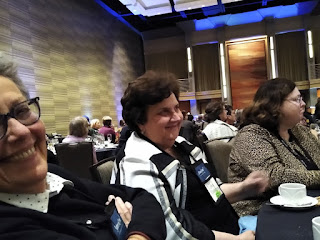 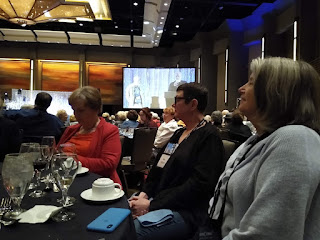 I know I’m in a picture with members of this blog, but haven’t gotten a copy of it. Don’t remember when that was taken.

SUNDAY
I headed out and drove to Austin to spend the rest of that week at my son’s house. Got home on the 8th, exhausted!

There were some great highlights! One was signing my story in COOKED TO DEATH for Rhonda Gilliland, hanging around with all the other people mentioned above, and just being with so many writers. The Kensington signing was fun, too, even though I don’t have a book out with them yet. Can’t wait until that event at Malice. Needless to say, I had a wonderful time at Bouchercon, but was confused for most of it!

Here’s one final comment on the drama of the whole thing. On the way there, a guy had a heart attack on our plane! On the way back, my luggage didn’t get home with me. I got it the next day, but was panicking!

There was a lot of confusion, Kaye. I had no idea there was a dinner Saturday night either. I heard there were free breakfasts too, but I didn't know about them until after the fact. And the only way I knew my way around was because I spent most of Wednesday scouting and getting the lay of the land.

But in spite of all that, it was great to see you!

I've been to two Bouchercons, and they are confusing. There's so much to do and so many people to see! I left feeling like I must have missed half of the activities. But I loved going.

Same here, Annette! The best part was seeing so many people I seldom get to meet up with.

Kathleen, do you think you'll do another one? I'm very hesitant!

I think a much better small program booklet would have been helpful.

The communication was awful. We (my daughter and I) had no idea when food was available. We just kind of ran into a couple of events. Very few people buy books at the conference any more. They are so much cheaper on Amazon and Kindle, and there are so many free books available. But we did have a great time overall. Lots of panels and old friends to see. I met an author from India who invited me to a literary festival there! I'm hoping to go to Malice too.

I was initially disappointed that we didn't get book bags like at other conferences, then that we would only get to choose 4 after signing in. But Kensington gave away tons of free books, and I'm part of that problem (gladly)! So you're right, there were a LOT of free books. I didn't sell a single one at the conference, but my Amazon numbers soared during and after, so it probably did me a lot of good. I'll be at Malice!

It was great to formally meet you, Sarah!

It was, Warren, in spite of some problems. I do love being in a building full of mystery writers. Lots of readers there, too.

I'll go, Kaye, if I get the opportunity.

I'm primary caregiver for my husband right now. While I can ask one of my daughters to come stay with him for a few days once in a while, I have to be judicious about that. (One daughter just took her oral exams for her PhD, so on to dissertation. She works full time. The other is about half way through a MA program that requires 1500 hours of practicum. They are both busy!) The last few times I've asked were for family events. I'm putting out feelers for at least one day at Malice, since I can drive that reasonably easily.

I remember those days well, Kathleen. I didn't have family to fill in, so had to hunt down places for temporary care. They were all positively awful. Didn't feed him or give him all his meds. I could tell because he was tube fed and there was too much left over, formula and meds. One place shaved off the mustache he'd had since he was a teenager. He got belligerent about that and they doped him up so he couldn't walk when I picked him up. I used only the most highly recommended and well-reviewed places. Be thankful for your daughters!

I hope to see you briefly at Malice, but, as my late husband always said: You can only do what you can do. Hugs.

Loved seeing you and having some time to catch up! Come to Sacramento and we’ll show you a good time! Michele

Same here, Michele! I don't know that I'll make it to Sacramento, but I wish you the greatest of luck throwing the next BC party! (I'm doing LCC in San Diego and that will use up my California allotment for 2020.)