Each time I begin a new mystery about a small, Midwest town, I notice once again the quirks and benefits of my own town. Some of these episodes I use in my books just as they happened, and others I embellish. I have lived in a one million+ city so I’m not immune to the charms or drawbacks of large places. All the same, I love living in my small Midwest town, and, frankly, it provides great fodder for the settings of both my Endurance and Sweet Iron mysteries.

Just recently, I was daydreaming at the stoplight on my way to the bank. Several cars were behind me, and I don’t know how long I sat there oblivious to the light. Eventually, I looked up, saw the green light, and drove into the intersection. Ordinary, you say. So what? You think. If I were in a metropolitan area, I’d have at least six people honk their horns to move me along. Several would literally lay on their horns. But here in my little town, not a horn, not a road rage incident, and not a single person yelling out the window or making an obscene gesture. This is a great snippet of information for the book I’m working on where people from a more cosmopolitan area visit my little town. Its lack of speed will drive them crazy. Tee hee.

At the time I was daydreaming, I was on my way to the bank because I needed to get ten crisp one-dollar bills to put in my grandchildren’s Halloween cards. [Thank God they are still young enough to
get excited about a dollar bill; in the future this will bankrupt me.] I pulled up to the teller window and recognized all three tellers. When I told them what I needed, I saw a mad scramble to get me just the right bills—no teenage wadded-up bills, no bills with holes, rips, or tears. I watched as they searched every nook and cranny. As they collected the bills, I noticed the doggie treats and lollipops on the counter to give to customers with little passengers. Small towns. Gotta love them. These tellers know I write mysteries and understand that I have grandchildren, including two sets of twins. They are so helpful. Mission accomplished.

In Three May Keep a Secret, I used a situation in my town and exaggerated it a bit. An intersection in our town, just off the Square, was a through street with stop signs on the east/west streets. People driving north and south went straight through. East/west had to stop. It has been this way for decades. The town fathers—what were they thinking?—decided to change the intersection to a four-way stop. They put stop signs in the middle of the north/south street between lanes so people would notice them.

As Jill in my book said, “Drivers knocked over and splintered three sets of signs. Obviously, the four-way stop wasn’t working. So then they voted to put a sign in the middle of the intersection saying, “Stop if pedestrians are in the walkway.” This resulted in people slowing down to read the sign and getting rear-ended. [This part is a true story.]

As Jill continued, “Great day for Bert’s Collision Shop. And one of the casualties was Mayor Blandford’s wife, Polly. She was arrested for causing a public disturbance because she got out of her car and marched back to Genevieve Blackburn, who was talking on her cell phone when she rear-ended Polly’s car. McGuire [the policeman] had to pull the two away from each other, and Polly took a swing at him too.” [Well, so I exaggerated a bit.]

Right now I’m looking out my front window at the fire hydrant in my yard. For years I asked the fire department to paint it because it was an eyesore. They were “too busy.” I decided to buy the red paint and do it myself. I think there must be a story in this little incident. I’m working on it… 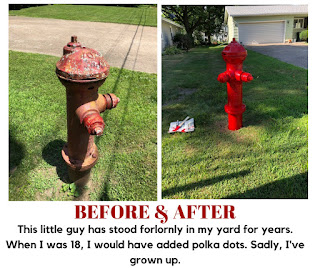 In Atlanta we had a choice: silver or red fire hydrants. The crew rang the bell and asked. In Cincinnati, hydrants are yellow. Go figure.

Hi Margaret. I am told that the fire hydrants in our town are painted specific colors because they somehow indicate the volume of water available. Way back in college, we used to paint the college hydrants in the school colors or add polka dots. Of course, that was the crazy 1960s. So now I am not allowed to do that. I guess that is called progress?

Where I live, they dispatch tanker trucks to draw water from ponds and lakes and send that to fires.

And one thing to consider if you're buying a house around here is how expensive fire insurance is if the house is situated beyond the covered bridge, which cannot accommodate the weight of fire trucks, or past the old (still used at least twice a day) railroad bridge whose underpass is not tall enough for them.

We do, however, have a fantastic ambulance service. It serves a ski resort nearby, and maintains totally up-to-date service and equipment.

Sounds like you are in a good place and know exactly what to do about real estate. So who does put out fires if they are beyond the covered bridge or past the railroad bridge?

It is fun to add the little quirks that residents know accurately reflect their towns,

You are so right, Warren! I have been compiling them lately.

If the regular fire engines can't reach a house fire, the brush fire vehicles will be dispatched. And in a really dire situation, a helicopter will carry personnel and equipment, if there's a place to land.

Theoretically, a helicopter with a tank or fire-surpassing foam could be launched, but by the time it got there, the house would probably be a pile of smoking ashes, so it will only go if it looks like the fire has a chance of spreading into the forests.