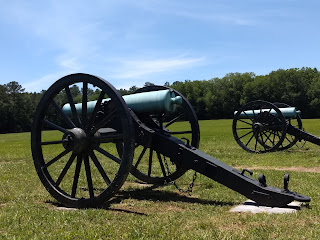 Driving to the Chickamauga Battlefield National Park feels like a return as much as it does a pilgrimage. My great-great-grandfather on my daddy's side wore the Confederate gray here. Eventually, he chased General Sherman's troops all the way to Savannah before he took an artillery ball in the leg, got captured, and was released at the war's conclusion to walk home from North Carolina back to middle Georgia.

I wish I knew why he took up arms, what motivated him to fight for the Confederacy. I have read enough letters from Civil War soldiers to know that their motives were various and often complicated, but I have no such letters from him. His military record shows him reporting for duty days after his eighteenth birthday. Was he an eager volunteer? Or was he conscripted, forced by the Home Guard to fight under penalty of death? Was he a true believer in this doomed terrible cause? Or was he a poor farmer caught up in a rich man's war?

I have no idea. And I have no way of asking him, not even at Chickamauga, a place that carried the dust of his feet one hundred and fifty-six years ago. Our family records are equally unhelpful on the subject. This green land near Chickamauga Creek surely knows the truth of him. But it's not telling either.

The National Park Service sums up the battle thusly: "The Battle of Chickamauga [left in its wake] a broken Union army and 35,000 men killed, wounded, missing, or captured. The victorious Confederates controlled the field, and soon followed the Union Army to Chattanooga and prepared to lay siege….The Union army may have lost the Battle of Chickamauga, but they won control of Chattanooga and threw open the gateway…. As one Confederate soldier ominously wrote after the fighting, 'This...is the death-knell of the Confederacy.'"

After learning how the battle progressed at Chickamauga, I could look at the grass and forest and farmland with a martial eye. High ground and low ground, one good for defense and hunkering down, the other good for the long view, for the calculated offensive. But it takes effort on my part. I have the historical play by play, so I know how the fighting progressed—here the back-and-forth skirmishing in the woods, there the drive through an unguarded hole in the middle of the ranks.

But on this most recent June day, sunny and mild, it was a picnic spot.

Years ago I visited Antietam, the site of the bloodiest single day of fighting between North and South. It was summer then too, and I was struck by the contrast between the rich, natural beauty of the present riddled with reminders of its brutal and bloody past. I wrote of that feeling:

"Half-gone. We are all half gone. It aches to see that, so clear and unavoidable, the promise of eventual extinction burning as bright as the rippling sunlight on the water. And what came of this crucible I'm standing in, this battlefield, this bloody beautiful cauldron? The United States, of course. The Battle of Antietam ended in a draw, but the war marched on to its conclusion. We stand now on that conclusion. It is living land, and changes beneath our feet, but a hundred and fifty years later, it's still supporting us, for better or worse."

I have toured many battlefields since then. And I always think of the metaphysical idea that time is a human construct, and that as such, everything that has ever happened is happening right now, still happening. I think memorials and monuments are our clumsy way of reminding ourselves of this. Former battlefields bring us back to the center of the thing. And then we go from there, as fallible in our understanding as ever, constructing an idea from grass and pictures and words carved in granite.

Historian Shelby Foote says that before this war, the United States was plural, as in, "The United States are." Afterward, it became singular. The Civil War, he says, made an is of us.

May our singular us-ness continue to prevail.

What glorious photos and what a beautiful day you had for your visit. Looking out from the tower it's hard not to see and smell the smoke that must have blanketed the field and woods and hear the cries and chaos of battle. Shelby Foote was amazing, how wonderfully he summed it up.

It's a shame you don't have letters or an oral history from your great-great grandfather. They would be fascinating to read.

Excellent blog, Tina, and a good reminder about how important it is to remember our history. I particularly like the point you made about the metaphysical concept of things happening at the same time in a location. It reminds me of the stories people have told about going to the beaches of Normandy and finding themselves viewing the actual landing. Fleeting glimpses, but still it raises questions.

Visiting historic sites can be inspiring. We live near Gettysburg (the annual reenactment will be in a week and a half; we will be hearing cannons and smelling smoke, not to mention dealing with impassible roads and huge crowds)


It's sad to think that we humans still somehow think that such huge sacrifices of lives of our young people, not to mention resources that could improve so many lives, are an appropriate way to deal with our differences.

Thank you for sharing your experiences and insights. I am not particularly sensitive to such energetic fingerprints (as my friends who are sensitive describe it) but my imagination connects me. The stories connect me. I do not know what it is about us humans that leads us to glorify and practice war, but we do. Sometimes as a last resort. Sometimes as the first. But remembering is crucial.

When we visited the Cape Cod grandparents, my father made a point of taking my raised in Georgia kids to the War of the Rebellion memorial by the lighthouse. As a WW2 veteran, he wanted the kids to have a broad view of history and understand and appreciate the tremendous loss of lives during the Civil War.

Wonderful post, Tina. I love your use of description. I stopped at Gettysburg on the way back from Malice Domestic two years ago. My friend and I got a tour from one of her friends who works there. The last time I was there was 1952. It has changed a lot. More statuary and more up to date facilities and information. I'm glad we keep these places sacred. So many of our ancestors need to be remembered.