While much of the FBICA consisted of lectures, the seventh class, like the field trip, was largely hands-on…and a ton of fun. The presentation on the Evidence Response Team (ERT) began with a talk. Here are a few of the highlights that interested me, as a mystery writer and fan:

After the lecture, we broke into groups to rotate through four stations where we could get our hands dirty. In some cases, literally.

My first station demonstrated how blood evidence is located and collected. 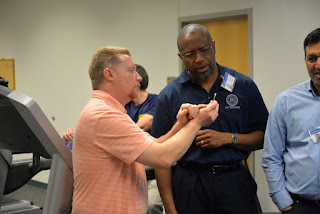 I’ve watched the crime shows on TV and seen them swab a surface and apply a few drops of liquid to turn the swab pink if blood was present. The reality isn’t far off. Some notes: the swabs are kept sterile prior to use. After swabbing a questionable surface, two different types of drops are applied to the cotton tip. If blood is present, the two different chemicals react and turn the swab pink, but a paler shade than the hot pink used on TV.

If blood is detected, they will then collect the item. If the blood is on a wall, they’ll cut out a chunk of that wall. If it’s on a marble floor or counter, they’ll cut out the piece they need. (Keep that in mind the next time you cut your finger and bleed on your expensive kitchen counter!) 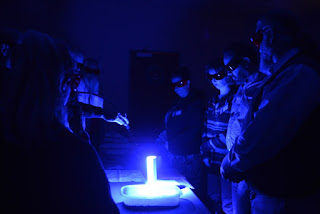 My second station involved ALS or Alternate Light Sources. We were shown a number of items with no real discernable staining. After we put on special goggles, the agents turned off the room lights and shined the ALS on the same items. As on TV, all sorts of stains (you don’t want to know what kind) became evident.

In the same station, we had the opportunity to play CSI and collect fiber evidence from each other.
I got to dress up like a real CSI (not quite as glamorous as on TV) and try to find dog hairs on a fellow student. (Either he used a really good sticky roller before coming to class, or I need new glasses because it wasn’t as easy as I’d expected.)

Next came fingerprint collection. While I’d watched it done before at Writers Police Academy and at other citizens academies, this time I was able to use the powder and brushes and try to lift my own prints from various surfaces. 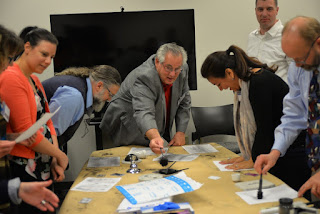 The final station demonstrated making molds of tire tracks or shoe prints, which is one thing I’d not seen done in any of my previous research. As with much of the crime scene investigation, it wasn’t as easy as it looks on TV or in the movies. (I failed miserably!) Fun fact: they use plain old hair spray to stabilize tire or footprints in dirt. 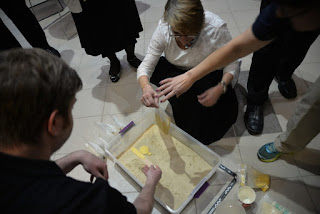 Preserving tracks in snow is tricky because the material used to make the cast creates heat. The tracks must first be treated with a special spray (like the hair spray trick) to keep the snow from melting.

(Photos courtesy of the FBI)

Thank you for sharing it with us.

Fascinating. I've enjoyed every blog about your time with the FBI.

Thank you for these blogs. I've learned so much from them. They also have given me the desire to see if there is anything similar in my town.

Thanks, Annette, for sharing what you learned in your sessions. It was interesting stuff.

Wow, what a great experience. I love that you were able to have photos, too. Thank you for sharing.

You're all very welcome.

Debra, every FBI Headquarters office offers a citizens academy. Definitely look into it!

Kait, we weren't allowed to take photos (security reasons) but the FBI had a photographer present and at the end of the academy, we all received copies of the photos.