If a publisher or independent author wants bookstores to order a book, it must have an ISBN (International Standard Book Number). In the United States an outfit named Bowker has a monopoly on issuing the 13-digit numbers. You’ve probably seen them on the barcode on a book’s back cover or inside a book on its copyright page.

Bowker doesn’t just sell and manage ISBNs. They market services to self-publishers, offer (for a price) to register your copyright, etc., etc. But I digress. 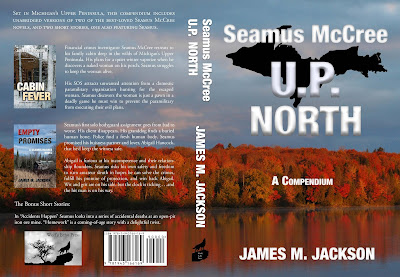 978: A prefix assigned to media barcodes by an international organization
1: English-speaking country
943166: Registrant, in this case Wolf’s Echo Press
16: Publication, here it’s the trade paperback version of Seamus McCree U.P. North (the e-book version has a separate ISBN)
9: A checksum digit to help catch typos or electrical transmission issues in the first 12 digits.

Taken together they tell those in the know that this ISBN represents the trade paperback version of Seamus McCree U.P. North published by Wolf’s Echo Press, and that someone purchased the ISBNs in a batch of 100.

Bookstores use ISBNs to order books and maintain inventory. It’s used to determine what entity may publish the book—not in a legal sense, but in a practical one. For example, before publishing a book through KDP (Amazon’s self-publishing platform), one check the book must pass is that the ISBN listed within the book matches the ISBN on the back cover, and that ISBN and title match the database maintained by Bowker.

Here comes the frustrating part. For Seamus McCree U.P. North, Bowker has the title listed as Seamus Mccree U.P. North (note the lack of a capital C in McCree). KDP has several quality checks it performs before it publishes a print book. One of the last is to make sure the proposed title and the one in Bowker’s database match. Mine didn’t, so no publication.

I am prone to typos and lately the stars have been aligned against me, so I figured I screwed up. Doubly so, because I had done the same thing for the electronic version of the book. After mentally giving myself a head slap, I changed the Bowker database online, checked twice to make sure I had it right, waited the day it takes for the database to update, and . . .

Dang if the database didn’t revert from the McCree I had typed in to the undesirable Mccree.

On May 16, I called Bowker’s help desk. The individual checked the database, understood the problem, and gave me an email address to report it as there was nothing he could do. I emailed a description of the problem and asked for resolution. Thank you for your assistance.

And a week later I sent a follow-up.

And six days after that I called the help desk and told them I had heard nothing and needed another way to contact someone who would respond. He sent an email (and copied me, so I know it happened). As of this writing, I am still without resolution, which means the only way anyone can get a print version of Seamus McCree U.P. North is by ordering from me because I can get “pre-publication” copies.

People can’t buy them from Amazon because the titles MUST MATCH before they will publish it. People can’t order them from their favorite bookstore either until Bowker fixes their database.

I’ve spent fruitless hours I could have spent doing something productive or fun. I’ve challenged my arteries with raised blood pressure. Now I’ve written a blog on the topic to relieve said blood pressure. (Not successful.) But now you know how Bowker works—or doesn’t in my case.

Update: Bowker responded to the email a day later, informing me they had made a fix in the database records by inserting the correct title and blocking any access to change it. Not elegant, but it should work. Unfortunately, I still can't publish the print version on KDP. It turns out that when Bowker "fixed" the title, they added a space between the U. and the P., and of course for KDP, I had it as U.P. without the space.

So, I tried to make that change, only to discover that dunderhead that I am, I managed to have a typo in the publisher's name. KDP needed both the new title and the publisher to match the ISBN. If I tried changing either one, all I got was an error that the book did not match the record. The KDP help desk couldn't help, but then I came up with the solution. I removed Wolf's Echo Press and the publisher and temporarily made KDP the publisher. That allowed me to change the Title to include the space between the U. and the P. that I didn't want, but have to live with. With the title fixed, I could again use my ISBN (making sure to spell Wolf's Echo Press correctly) and poof! it let me publish. At least I think -- it is under the up-to-72-hour review.

I admire your perseverance and stubborn refusal to give up! These challenges would have defeated many people.

I hope it works out in the end.

Oh the frustrations of trying to get anything done. But nothing like a blog to vent your frustrations! Hope the corrections take this time.

what a nightmare! I hope the situation is resolved.

Oh, Jim! That is one heck of a frustrating story. Hope all is in place now. Impressed that you were able to speak with real humans. Hope your next publishing venture is stress free.

Kudos on your persistence, one of the major requirements of authorship.