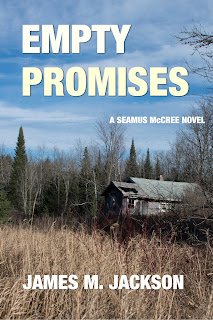 Tuesday marked the day when I officially sent Empty Promises out into the world to live or die as the fates and readers decide. One disadvantage of being your own publisher is that when your product has an error, there is no one to blame but yourself. Just to be perfectly clear, I don’t like screwing up. No one does, but I really don’t.

That strong desire for perfection might keep me from publishing anything including this blog. Fortunately, my son had an English teacher who once said in passing something to the effect that “no writing is ever perfected; the author finally decides to abandon it.” I remind myself of that every time I hesitate to push “send” or “publish.”

But before I can make that commitment, I often have to read it “just one more time” to find the last typo. I know it’s hiding somewhere—and deep in my heart, I know that even if I find that one, there is one more last typo hiding somewhere else. It is darn near impossible to have an error-free, 90,000-word novel. I swear commas can and do move of their own accord between readings. Having only one error means the novel is 99.9989% correct. Even five errors mean 99.9944% is correct.

I’m a math-geek, but I can’t add a string of numbers ten numbers 90,000 times and be correct 89,995 of my attempts. I’ll transpose a number or miscarry a digit or something many more times than that and think nothing of it. Yet I want my novels to be error-free. So sad.

Empty Promises was available for pre-order on Amazon, and they insist the “final” version must be available three days before the release date. No problem: I was ready a month before. And then I discovered a typo—actually E. B. Davis discovered the typo. In one of her interview questions (see here for the entire interview) she asked what a pine martin was. Well, I was about to correct her typo—it’s a pine marten—when it occurred to me that maybe she had copied the error from my manuscript.

Sure enough, and that sucker had slipped through my editor and all three proofreaders (not to mention all the times I had reread the novel). Expletive deleted. I still had time to read the electronic version “one last time,” so I did.

A quotation mark was after a space rather than before it. Another quotation mark had doubled up. A comma had lost its tail and was masquerading as a period. The name of a business gained an “s” where their incorporation papers didn’t have it. Nothing critical, but all wrong.

I made the changes and submitted them before Amazon’s deadline. And then we had company come to visit. One of them had read my novella, Low Tide at Tybee, on the car trip down to Savannah and mentioned that she had spotted a typo. After another (silent) expletive deleted moment, I asked if she could find it. I couldn’t do much about the print editions, but I could fix all of the electronic ones. She did find it; I did make the correction. Anyone who buys the novella in the future won’t find that error.

All of which tells you two things about me. (1) I’m not good at this abandonment thing with my writing, and (2) if you find a typo, I want to know about it so I can fix it.

James M. Jackson authors the Seamus McCree mystery series. Empty Promises, the fifth novel in the series—this one set in the deep woods of Michigan’s Upper Peninsula—is now available. You can sign up for his newsletter and find more information about Jim and his books at https://jamesmjackson.com.

congratulations on your new release. Books have typos and missing words. Or make reference to famous poems incorrectly. Or get a location dead wrong.

Good advice, Margaret -- but not easily taken by me. :)

I'm editing a publication at work now that's been through dozens of edits/revisions, five or six sets of eyes, and STILL last week, on my "just one more" review, I found three typos. As my boss says, "Obsess now. After we send it to the printer, we're never looking at it again." :)

Julie -- And that's a good mindset for a publisher -- that need to move on to the next project.

I usually find the typos when I'm fondly rereading a long-in-print work I wrote.

KM -- at least you are still fondly reading it :)