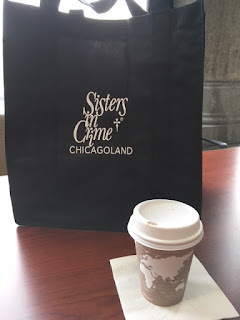 On St. Patrick’s Day in Chicago, I attended Murder and Mayhem, a crime readers and writers conference organized by author Lori Rader-Day and publicist Dana Kaye.  At nine in the morning, South Michigan Avenue was thronged with parade attendees attired in green. Simultaneously with the conference kick-off, the Chicago River was dosed with green dye. Let the party begin! 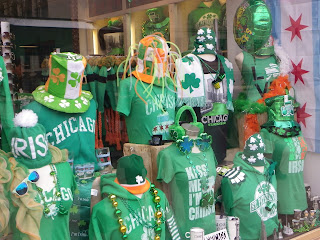 Eric Beetner was Master of Ceremonies for the one-day event. He kept up a lively banter as he introduced the five panels and keynote conversation between Jeffery Deaver and Gillian Flynn at the end of the afternoon.

Series authors Raymond Benson, Jess Lourey, Nick Petrie, Patricia Skalka, Carrie Smith, and Susanna Calkins spoke about character and plot arcs in a series. How do their characters age? And what if a publisher drops the series? Lourey characterized writing a series as “clearing out the rusty pipes in an old house.” With each book in her series, she reveals more about her characters and their backstory.


Thriller and crime writers Jamie Freveletti, Michael Koryta, Mary Kubica, Isabella Maldonado, and Lori Rader-Day addressed how they use place as a real or fictionalized setting in their novels. Julia Borcherts, a Kaye publicist, moderated the panel. How does your perception of a real place change after you use it in your novel? Maldonado, a retired D.C. police captain who writes the Veranda Cruz police procedurals set in Phoenix, said she was “used to knowing where the bodies are buried.” She waxed eloquently about “the desert vibe” in Phoenix and how the intense heat assumes the role of a major character. Maldonado delighted in telling us Phoenix residents refer to themselves as “Phoenicians.”


Eric Beetner, Terri Bischoff, Cheryl Reed, Andrew Shaffer, and Jessica Strawser discussed various aspects of publishing, moderated by Adam Morgan. Strawser is a Cincinnati resident and Editor-At-Large for Writer’s Digest Magazine. I’ll write about her books in a future blog post. Terri Bischoff, Acquisitions Editor for Midnight Ink, made the chilling statement that she only reads a submission until she finds a reason to reject it. Every aspiring author in the audience gulped and chewed her nails. 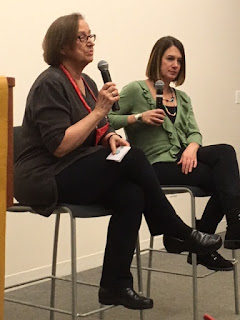 
Flynn grew up in Kansas City, Missouri, the daughter of a film professor father and reading comprehension professor mother. Her father took her to the movies on a weekly basis, after which they would analyze each film. After obtaining a graduate degree in journalism from Northwestern, she wrote for Entertainment Weekly. She published her first two novels while working for EW. After she lost her job, she wrote Gone Girl and the screenplay adaptation. She currently is executive producer and co-writer of the HBO miniseries adopted from Sharp Objects, her first novel. She characterized the book as a “character story inside a mystery.”


Flynn focuses on the violence of woman in her novels, telling the audience to “own the darkness.” She creates female characters who display a full range of emotions from good to evil. Flynn noted that the majority of mystery writers are women, for whom creating fictional characters and plots is a safe way to deal with violent tendencies. She admires the writing of Joyce Carol Oates and Margaret Atwood.


Flynn is a journalist and writing is her job. She writes in scenes, claims not to plot, and routinely hits the hundred-page block. As a birthday surprise, her husband installed a wall-sized white board in her downstairs office on which she writes notes. She doesn’t have a problem writing from a male viewpoint, characterizing herself as “part dude”. Flynn’s beta readers are her lawyer husband and a close friend.
Flynn completed her interview with these admonitions: be stubborn, keep writing, and don’t settle for a first draft. 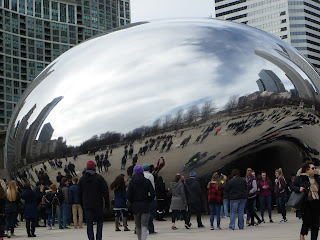 
At the end of the day, Jeffery Deaver and Gillian Flynn held a keynote conversation about their respective writing processes and crime fiction. They agreed that there are two kinds of people in the world: those who look under rocks, and those who don’t. All 250 attendees agreed that they were the former.


The first horror/scary book Deaver read was “Hound of the Baskervilles.” He noted that the moor setting offered no place to run. Flynn’s first brush with horror was In Cold Blood. She described her first story, written about age eleven, “To the Outhouse,” which featured a pack of wolves and gory climax.


Sisters in Crime founder Sara Paretsky awarded Gillian Flynn the Paretsky Award. Paretsky noted that Flynn writes about the “forgotten places” of the Midwest—Kansas and Missouri, where readers live but unlike Chicago, places that are rarely used as settings in novels.


Readers and writers, have you attended an author panel event? Do you prefer a panel presentation or an hour-long in-depth presentation? 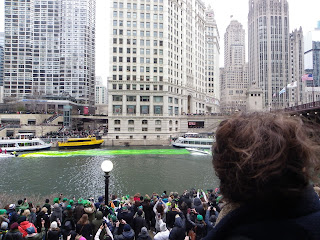 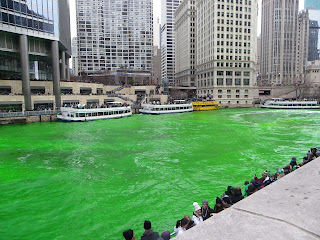 Dying the Chicago River green on St. Patrick's Day
Posted by Margaret S. Hamilton at 12:00 AM

Some years ago I attended a similar event in Chicago where I met Sara Paretsky (a favorite author of mine) when she led a master class in which I was lucky enough to participate.

Author panels are good for reminding me I'm not alone and my struggles are shared, but I learn much more from individual presentations that have depth.

I'm of Irish extraction, and I lived in Chicago for several years. Your pictures were a great memory-jogger.

What a terrific conference, and what a terrific day. Your photos are wonderful. What a day! As a writer and photographer, you must have been in heaven!
In panels, a great deal depends on the moderator and the individual authors and their comfort zone talking to groups. Sometimes the questions in these situations don't touch on the things I'd like to know, whereas with presentations I feel there's more opportunity to open up and breathe a bit.

Thanks, Margaret, for the recap of the conference. Lucky you attending this event.

Margaret what a great time you had. Some years ago there was a mystery writers group in Chicago called Love is Murder. I went to it three times. One year they had a contest for short stories and I won. My story then appeared in Crime Spree magazine.It was "Cheating on Your Wife Can Get You Killed." After my three times going there the conference closed down. I'm wondering if any of those who started the one you went to belonged to that one, too.

Jim, I had a brief chat with Sara Paretsky. She was friendly and encouraging.

Kathleen, Chicago went all out with the parade, buildings lit with green lights at night, and non-stop celebrations.

Shari, the panels gave a brief overview of the authors and their books but I would have preferred in-depth presentations.

Grace, I'm lucky the weather was cold, but without snow.

Warren, it was a fun event. I learned so much from Jeffery Deaver's commercial fiction workshop the next day (which I'll discuss in my May blog).

Gloria, Lori Rader-Day and Dana Kaye put together the first M&M conference last year and combined it with Deaver's MWA presentation the next day.