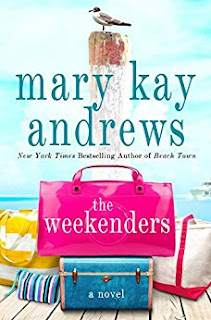 I’ve been reading Mary Kay Andrews for decades without knowing it. She wrote a mystery series under her real name Kathy Hogan Trocheck, which featured Callahan Garrity, an owner of a house-cleaning service and an amateur sleuth. After ten books, I was so bummed when the series didn’t continue. Enter Mary Kay Andrews, who writes Southern women’s fiction, many of which are set at the beach, but are not mysteries. I loved her books and finally discovered the two authors were one in the same. (It really is all in the writing.) The two writers’ genres remained exclusive until The Weekenders was published in 2016. It’s on sale at Amazon for $2.99—buy it now even if you can’t read it right away.

The story is set on Belle Island, which is patterned on Bald Head Island, NC, where the rich have homes and transport on the island is by only golf cart, not car. Main character Riley Griggs and her twelve-year-old daughter are at the ferry dock waiting for her husband/father of her child to arrive. He doesn’t show, and on the ferry, Riley is served with a legal notice. She thinks it’s divorce papers since they had planned to tell their daughter about their split that weekend, but instead it’s something different, of which Riley wasn’t aware devastating her. It’s a woman’s story, but it’s also a murder mystery and you can guess the identity of the victim. But what happened to him and why, Riley must discover to save herself and make a new life for herself and her daughter. This is a long and satisfying read with strong secondary characters and family history that screams for a beach chair and a thermos. $2.99—no excuses!

Beach Trip was a surprise. The author, Cathy Holton, passed away in 2013, but she left a great legacy of work behind—and this is one, an enjoyable beach read with a twist at the end that will make you smile.

The scenes go back and forth between the four college roommates’ histories during college to their present-day reunion. The present day is set on an island at one of the roommate’s beach mansion. The story shows their relationships, their historical impacts on their present lives, and how they survive failures and shortcomings—and how together they can right the wrongs of the past. A coming together of sisters—yes, but Holton writes great characters without the sugarcoating.

Beach Trip Cover Copy
Mel, Sara, Annie, and Lola have traveled diverse paths since their years together at a small Southern liberal arts college during the early 1980s. Mel, a mystery writer living in New York, is grappling with the aftermath of two failed marriages and a stalled writing career. Sara, an Atlanta attorney, struggles with her own slowly unraveling marriage. Annie, a successful Nashville businesswoman married to her childhood sweetheart, can’t seem to leave behind the regrets of her youth. And sweet-tempered Lola whiles away her hours—and her husband’s money—on little pills that keep her happy.

Now the friends, all in their forties, converge on Lola’s lavish North Carolina beach house in an attempt to relive the carefree days of their college years. But as the week wears on and each woman’s hidden story is gradually revealed, these four friends learn that they must inevitably confront their shared past, and a secret that threatens to change their bond, and their lives, forever.
Amazon.com 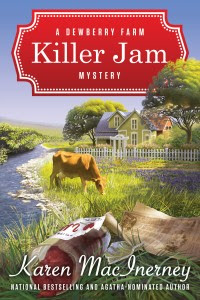 I started reading the Dewberry Farm Mystery series, book two, Fatal Frost, but start on the first book, set in the summer—Killer Jam. They’re on Kindle Unlimited now so again—it’s worth the price of one month to read this series, which has four books.

If you remember, Karen MacInerney wrote the wonderful Gray Whale Inn series set on an island in Maine. She comes back strong in the Dewberry Farm Mysteries. Set in the small town of Buttercup, Texas, main character Lucy Resnick cashes in her retirement fund and career as a Houston reporter to start an organic farm on her grandparents’ old farm, which has been in the family for generations. Her mother thinks she’s crazy and isn’t afraid to say so. Her new Houdini-like goats and her puppy create lots of mayhem of their own without killers on the loose. The books are great reads, and I’ve found that reading books set in winter when you’re nice and warm on the beach—makes for cozy reading.

With this series of four books and the other two, you’ll make a great start on your summer reading!
Posted by E. B. Davis at 12:00 AM

I always thought that reading books about winter while at the beach made perfect sense. The sun could warm you from the chills you got from the reading!

Happy Beach Reading to all our readers, regardless of whether your beach is only a literary device.

Delighted to find out that former AJC reporter Kathy Hogan Trocheck is writing mysteries again! I adored the Callahan Garrity series. When I lived in Atlanta, I met Trocheck at a library book talk. She was lively and funny and admitted to dragging her kids along when she plotted a car going off the road into the Chattahoochee River. Her social commentary on Atlanta inhabitants was spot-on.

As if I needed anything to add to my TBR list! But these do sound good, and I'm going to look into them.

Put on your sunglasses and hat, get a cold one and enjoy!

Like KM said, it does sound interesting. I'll put it on my list, but right now I just got home from Malice where they were giving away books and I got 37 free books as well as buying seven books of authors there I knew or met there. I am writing down the titles and name.

There's always too many good books to read, but some of these are very low priced and they are wonderful reads. I just read a Christmas book and found it very enjoyable out of season. Maybe outside of the stress of Christmas, reading about it now is better.