That Old Black Dog of Fear 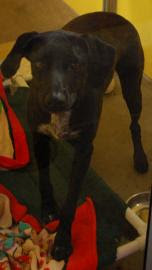 The prejudice against black cats and dogs goes back a long way to old superstitions about them being the devil’s animals and being bad luck. I could trace these legends back to their beginnings in the battle between religions where the animals were simply used as props and propaganda weapons by the warring sides, but I’m not going to burden this blog with that today. It’s a shame that companion animals have to be dragged into our human quarrels in this way. 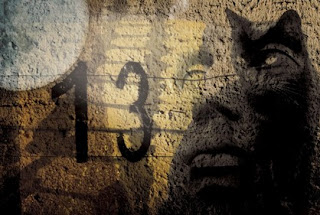 The only thing sadder than a rejected black pet is an older cat or dog who’s also black. No one wants these. You combine the prejudice against older animals with the prejudice against black animals and come up with a stone wall these cats and dogs can’t get over, no matter how sweet, cute, bright, well-behaved, and gentle they are. If you talk to anyone in the rescue business or look on any of their websites, you’ll quickly find that this is a sad, basic truth in the world of those who care for and try to find permanent homes for older, black pets.

The silliest part of it, to me, is that the pet doesn’t even have to be all black, certainly not if it’s a dog. Check out your local humane shelter’s “black dog sale,” and you’ll find that dogs that are only part black are included in the sale because they’re included in people’s prejudices against black animals. My own rescue dog is a Plott hound with the typical brindle brown coat, but because he has a black saddle on his back, he was deemed a black dog and unadoptable.

Rescue and shelter animals have enough prejudice against them. Every year, approximately 3-4 million cats and dogs are euthanized in shelters. These are animals people gave up and threw out, or the offspring of such animals. It’s getting worse because many families have lost homes and been forced to move to apartments that refuse animals, causing them to surrender family pets if they can’t find friends to take them. Yet still, people pay big bucks to buy dogs and cats from breeders—and oddly enough, many of those wanted, purchased purebred dogs and cats (but more often dogs) find their ways into shelters around the country. I’ve been taking in shelter dogs all my adult life, and I’ve noticed a big change there. It used to be rare to find a purebred animal at a shelter. Now, they’ve all got some, and often quite a number of them. 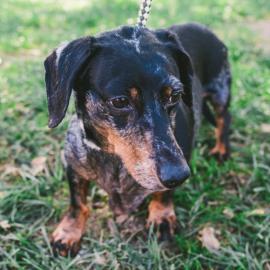 I can’t stress enough how important I feel it is to give homes to shelter/rescue cats and dogs, if you can and if you are looking for a pet. They make grateful, loyal, and affectionate pets, and you’re quite literally saving a life when you do. And while you’re looking for a good pet at your local shelter, please, please don’t bypass the older, black animals in your search. Older, black cats and dogs are at the highest risk of being euthanized because no one wants them. Take one home and bask in its love and affection. You’ll be glad you did as the years in company with your faithful pet slip past.

My daughter is working on an "adopt older dogs" project right now. I'll let you know when it airs.

I'm amazed. It never occurred to me that people would be prejudiced against black animals. It shouldn't surprise me, but it's such an antiquated notion. But then, all prejudice is. We go back and forth about adopting a pet. Since we've never had pets, I'm not sure it's the right decision for us. A neighbor has adopted many shelter dogs, but out of three, she keeps two of them near to her during walks. They aren't the friendliest--of course being treated badly by humans would sure make you want to bite one. If we ever do--you bet I'd get a shelter dog. Give Dyson a pat for me!

Your blog really touched me, Linda. My daughter adopted a lab/pit blend dog from a shelter. People see the little pit in him and shy away. We love him but realize that people are afraid of him, so we keep him well away from other people. He is a very healthy rescue dog. My other daughter bought a Rhodesian Ridgeback and that poor dog has ever allergy in the book.

Elaine, all rescue dogs aren't skittish or aggressive toward strangers. Some are, of course, but many have never been mistreated, but their families lost homes, etc. Also, surprisingly many who have been mistreated are still sweet and friendly. Your neighbor must be taking in dogs from bad situations, which makes her an angel. If you're interested in a dog, check your shelter and tell them you're a first-time dog owner and would need one that's easy to handle. They know the dogs' backgrounds and personalities and have a vested interest in not having the dog returned, so they'll put you with a friendly, well-behaved dog.

Grace, you're so right. Rescue dogs who are mixes tend to be healthier than purebred dogs who are too often interbred. Pitties are another sad case of irrational fears dooming thousands of dogs to death. Pit bulls are no more "natural killers" as some say, than any other breed. I remember when they used to say the same thing about Dobermans decades ago. Aggressive dogs are the fault of their owners and can be any breed, including chihuahuas. Bad owners create bad dogs, and then the entire breed pays for the sins of a few bad owners. Even Michael Vicks' dogs, which had been trained and forced to fight and kill, have been healed from their terrific injuries and retrained and are happy and loving now in good homes.

Wonderful post, thank you! Your dog, Dyson, certainly is handsome. My very first pet as an adult was a mostly-black cat that a co-worker no longer wanted. Socks was such an affectionate boy and showed me the joys of sharing life with a pet. My most recent was a small Shih Zhu, Boo Boo, who was so solid black that we had trouble getting him to show up in pictures:)


Humane Society here doesn't adopt out black cats in October, for fear of harmful motives.
. . . and one names black kittens Jelly Bean, because it makes them cuter and more apt to be adopted. Another organization matches older humans with older animals, including a promise to re-home the pet if the owner becomes unable to continue care.
I just realized that my sister's dogs are black, as are some of my niece's, no prejudice in our family. I have allergies, though, so no furry guests -- Prince, the Eastern Gray tree frog, was the perfect houseguest for me. ;-)

When I was little we had an all black cat named John (my little sister got to name him. Even then I thought, "John?") John was my favorite of our pets and someday I'd love to get another, if only I can get my husband to mellow about cats.
Give Dyson a pat from me - handsome fella!

Becky, Dyson thanks you. He's very vain and loves to be complimented and made over. We adopted him when he was on death row, scheduled for euthanasia the next day. He's a lot bigger than he looks in the photo, and he has the bark of the Hound of the Baskervilles. As a Plott hound, he has the deepest, most melodious bay, often in evidence since we live right off a major street with lots of emergency vehicle sirens.

We recently lost our sweet black cat, Minnie. Both of our pets were rescues--as all my many pets have been for the many decades of my life. Never had a bad one.

Mary, yes, they have to watch out. "People"--if you can actually call them that--will take black cats at Halloween and do gruesome things to them. Older pets are often well-trained. They're usually less rambunctious and less likely to be troublesome. They're usually calmer and quieter, but people want cute puppies and kittens.

Shari, yes, John? My husband was a cat person and afraid of dogs, so I couldn't get a dog for a while. Finally, i did--an older, well-trained female husky-sharpei on the day before her scheduled death--and he was terrified until he took her for a walk and fell in love with Mina. Now, he's such a dog lover that everyone gives him dog-themed gifts and cards.

Elaine, it figures. With a good heart, though.

One of the problems with getting black animals adopted is exactly what Becky said: they don't show up well in photographs. Our local paper has a weekly feature with an adoptable animal, and the only time they show black ones is when a professional photographer (who donates her time & skills) can get over to take a picture.

We just lost our beloved Arabella. She was an all-black cat. We had her for fifteen years. We fostered her and her litter of kittens for the local humane society. When it came time to take them back to the shelter for adoption, we realized that while the adorable, multi-colored kittens would quickly find homes, Arabella would likely end up in a cage indefinitely. We couldn't quite stand to think of that wonderful, friendly, affectionate cat living out her days like that, so we adopted her.

When our kids were young, we had Newfoundland dogs as pets. They are unflappable, love children and easy to train. However, they are huge and most of them are very black. Our most recent dogs have been a labradoodle, rescued the day before he was to be put down, and a Heinz 57 who looks like the pictures of Finnish Spitz (including the characteristic reddish coat) except his ears don't stand up. He came from a prison program in Zanesville, OH.

I'm teary-eyed here. Adopt don't shop has been my motto since childhood. With few exceptions (dumps in my yard) I've sought out older animals and in shelters, black cats for all of the reasons you cite. You have opened my eyes though. I had no idea that dogs subject to the same insane discrimination.

In Miami, black cat adoptions were stopped in early October and didn't begin again until after Halloween. I don't know if that is still the case, and I won't go into the reasons, but it was necessary.

KM, my sympathies are with you in your loss of your Arabella. We just recently lost our own black cat, Minnie, who had been with us for 16 years. We haven't replaced her yet because we're in the process of downsizing and moving, and we'll wait until we're in the new house first.

Yes, Kait. Black dogs are thought of as the devil's by many people, or just as bad luck. So sad when they are such sweet, loyal creatures.