So many books are published every year, and when you're an unknown author, it's hard to get noticed. If you can figure out a way to sell books in a non-traditional way, you might face less competition.

When my first novel, Going Home, came out in 2014, I wanted to celebrate with a launch party. But I felt uncomfortable asking my friends and neighbors to buy my book; it seemed like I was charging them admission to come to my party. Even though many of them were eagerly awaiting the book's publication and more than willing to buy a copy, some of my friends and neighbors aren't readers. And then there are those who think being a friend or relative entitles them to a free copy. 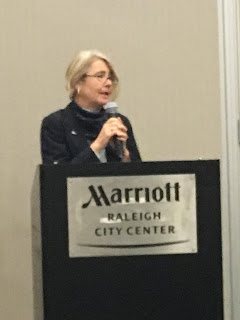 I'm an active volunteer with the Fayette Humane Society, a local nonprofit animal rescue group, and we're always short of funds. I decided to turn my launch party into a fundraiser for the Fayette Humane Society, and donate the proceeds to furthering our mission of spaying/neutering cats and dogs to fight pet overpopulation. With all the funds going to charity, I felt more comfortable asking people to buy my book. If they didn't want to read it, perhaps they could gift it to someone who's a fan of mysteries—someone who might not ordinarily know about the book. (And who might read it, like it, and refer it to friends, some of whom might actually buy it through another channel that would result in royalties for me.)

And a lot of people bought Going Home at my launch party and at subsequent author events I held. I'd tapped into two audiences: those who were actually interested in reading a good mystery (or at least owning a signed copy of a book written by an author they had met) and those who believed in supporting a local animal charity. And because the money was going to charity, many people gave me more than the list price. My book retails for $16.95; a lot of people handed me a twenty-dollar bill and told me to keep the change. (I doubt that would have happened if the money were going into my pocket.) And I didn't have to worry about collecting sales tax, since I wasn't really "selling."

But Going Home has nothing to do with animals. The heroine does have two pet cats, but they're not on screen. So partnering with animal rescue groups to sell the book did not make sense on a larger scale. The story was inspired by my mother's battle with Alzheimer's, a cruel disease that robs a person of her very identity, while her family watches hopelessly. I never realized how many lives Alzheimer's has touched until readers started telling me they could relate to my story and the mother character, because they had had to deal with a friend or relative who had suffered from the disease. 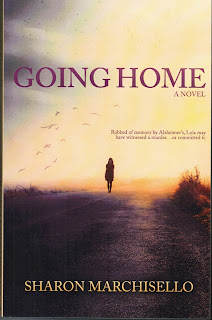 After Going Home was published, I participated in my first Alzheimer's Walk, where I discovered a huge potential audience and natural fit for a partnership. I also learned something pretty cool: all the Alzheimer's colors are reflected on my book's cover. Purple stands for those who have lost someone to Alzheimer's. Blue represents people living with Alzheimer's; yellow represents their caregivers. Orange symbolizes those who don't have a direct connection to the disease, but are supporters of the cause to find a cure. I contacted the graphic artist at Sunbury Press who had designed my cover. "Did you know about the colors?" I asked her. She hadn't known.

The following year, when I was approached by someone from the Alzheimer's Association about being a team captain, I suggested holding an author event as a fundraiser. She thought it was a great idea, but said she'd have to check with the organizers.
They turned me down. "We don't think it would be appropriate for the Alzheimer's Association to promote someone's book." Really? But it's okay to sell T-shirts, wristbands, and other swag (and you know the vendor is getting a chunk of the money) but not a book, whose entire proceeds are being donated to the cause? "If you'd like to hold your own fundraiser and donate the proceeds to us, that would be okay." Thanks a lot! I was hoping to gain a wider audience. All my friends with any interest in my book have already bought it.
This past year, my new next-door neighbor became one of the organizers of the Alzheimer's Walk for our city. I approached her with my offer, and unlike her predecessor, she got it. Although the "powers that be" still wouldn't condone selling the book at the event (alongside the T-shirts and other swag), she put me in touch with a team captain who was holding a fundraiser at a restaurant that was contributing a portion of their dinner sales to the cause. They allowed me to set up a table at the entrance to the restaurant and sell books in exchange for donations. In one evening, with no prior advertising besides my personal Facebook shares, I collected almost $300 for the Alzheimer's Association. Next year, I'm hoping to expand my reach to a different team and explore new ways to introduce my book to supporters.
Partnering with a charity is not the way to get rich from your writing. But I do think it enables you to find more readers and feel good about helping causes you care about.
Bio: 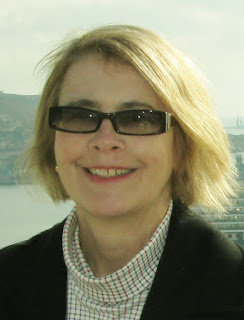 Sharon Marchisello has written fiction all her life, but Going Home (2014, Sunbury Press) is her first published novel. She has also written travel articles, corporate training manuals, book reviews, and a personal finance e book, Live Cheaply, Be Happy, Grow Wealthy. She earned a Masters in Professional Writing from the University of Southern California, and is an active member of Atlanta Sisters in Crime, where she contributed a short story to their anthology, Mystery, Atlanta Style. Going Home was inspired by her mother's battle with Alzheimer's, which prompted Sharon to wonder what it would be like to interview a witness unable to rely on her memory. She is currently seeking an agent for her new mystery novel, Secrets of the Galapagos.
Posted by E. B. Davis at 12:00 AM

We certainly do need creative sales techniques if we want our work widely read.

Thanks, Sharon, for joining us at WWK. It's tough for writers to both create their works and then having to promote them. Anytime you can support a good cause through your book promotion sounds like a win-win situation.

Thanks for sharing your experience. It is hard to make your book stand out.

Sharon, that's an interesting way to promote your books. You've picked some good charities to support.

Thanks everyone for your kind words!