This past Saturday, I left early to join two of my sisters for breakfast at Perkins. Afterwards we went on to Sharon, Pennsylvania to take part in a Sister’s March there in solidarity with the one being held in Washington D.C. and all over the country and the world. It’s the first one we’d been on since our Viet Nam War Protest March way back in the early sixties.  It was a warm day for January, and the sun was blessing us after a week of clouds and rain.

My sister Elaine had made three poster board signs – one for each of us. We arrived early and parked in a large parking lot across from the small park where we were to meet. Some people were already in the park and others were standing around their cars. We joined some of those in the parking lot and chatted away and got acquainted asking where they came from without asking for names.

Everybody was excited,
and enjoyed others who have the same beliefs and goals. I visited with five women, and we got a little more acquainted mostly because one
had this adorable little black poodle. Of course, then I had to show  pictures of my collie Maggie, and that led to the fact that I wrote mysteries, and they all wanted my website so I gave them each a bookmark of my first book. One never knows when one will find a follower of their series. Hopefully, at least one of them will.

Gradually the people in the parking lot started heading for the little park where we were all to meet, and my sisters Elaine, Suzanne and I joined them, each holding a sign Elaine made. How exciting that was to join the crowd of people from different areas around that small town. Everyone was smiling, friendly, taking pictures of different signs, and it was so cool to see quite a few men participating, too. There was music, speeches and a TV station taking a video, which I found out was on Channel 27 from a town in Ohio not too far from where I live. It’s too bad my TV is out of commission, but I probably can find it on the internet, I’m hoping. My sister said they reported our march had over seven hundred people. Of course, that doesn’t compare with those in the larger cities, but for this small town that pulled in people from areas and towns around it, that was still a good amount of people.

While we were waiting, a woman came up and said she wanted to interview one of us for the National Archives. Elaine immediately pointed to me because they know I’m a social person who enjoys talking to people. I had to sign a permission form with my name, and maybe where I’m from. I don’t exactly remember, but when that was taken care of, she started asking me questions like why I was there, and so on. It wasn’t a long interview. When she finished she thanked me and moved on.

Before we were to head out at noon, the woman who organized the march said there would be some Trump hecklers, and we were to ignore them and not get involved. Our motto was Love Trumps Hate.

A minister came and said a short prayer. We all bowed our heads in silence before we started out. 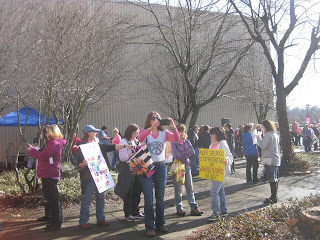 My sisters and I were closer to the end of the line. Part of the time I walked close to a young man pushing a stroller with two tiny girls, one two and a half years old, and the other six months old. He said his wife was a teacher and was teaching a seminar for new teachers, which is why she couldn’t come. I told him I was a retired teacher. (See I told you I’m a social person.)  He asked what grade I taught, and when I said third grade, he smiled and said that’s what his wife taught. 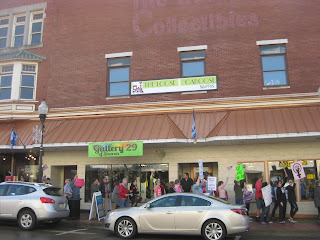 When we got to the top of a hill where a beautiful library was on a corner, the marchers crossed over with a police officer holding up traffic. Then we all started downhill. While there had been one car that went by with a Trump sign held out by someone, the only other disruption was three or four men in front of a bar that made derogatory remarks. Most of us ignored them, but a few made some comments back. We hadn’t gone far when I heard two black women a few people behind me start singing “We Shall Overcome.” I turned around, smiled and started singing with them, turning every so often to smile at them as I sang – not as beautifully as they did, of course.

After we all got back to the park, although some left, there were more speeches and a prayer, and then we headed out filled with love and happiness to be with such a group of like-minded people who stood up not only for the rights of women, but blacks, LGBTs, immigrants and people of different religions. My sisters and I vowed to attend any future marches that are held within driving distances. We were psyched up with having such a positive and happy day with so many smiling friendly people.

My youngest daughter Mary on her own attended a march in Sacramento. She was to ride with others on a train there, but she’d worked the night before and was too tired to get up in time to make the train, so she drove there. She was psyched just like my sisters and I. Like her talkative mother, she enjoyed talking to people and took far more and clearer pictures than I took. She was still on a high this afternoon when she called me after I got home from church. Last night she sent me lots of links to speeches made in Washington D.C. by Ashley Judd, Madonna, Elizabeth Warren, Gloria Steinem and also one by Bernie Sanders in Connecticut, and other speakers, too.

Did you march this past Saturday?


Have you ever marched in a protest march?
Posted by Gloria Alden at 12:00 AM

Email ThisBlogThis!Share to TwitterShare to FacebookShare to Pinterest
Labels: and the rights of others., Women's rights

Thanks to you and your sisters for participating in the march. I can discuss politics with anyone who has an open mind whether they are to the left or right of my political beliefs. Often those discussions bring me deeper understanding of an issue than I had before.

What I cannot tolerate from public officials from any political party are ad hominem attacks and deliberate perversion of provable (not arguable) facts. Wherever and whenever they occur, we must call them out. Unfortunately, there has been a recent increase of verbal attacks on people because of their sex, religion, or disabilities. Mom's adage that "sticks and stones may break my bones, but words will never hurt me," isn't correct. Real damage can and is done with words.

I was unable to participate in any of Saturday's marches, but I stood with you in spirit, and I think Kaye Wilkerson Barley carried my name along with many, many others in her pocket when she marched in Washington, DC.

Jim, I so agree with you, especially in the denial of climate change among many other things. I heard on NPR that the #1 book on Amazon right now is George Orwell's 1984. That says something, doesn't it.

An open, honest (not mean-spirited) dialog and expressing our views through the Constitution-protected rights of assembly and free speech are integral to our system. I'm all in favor of those who make the effort to get their thoughts and feelings presented forcefully yet peacefully.

I'm still housebound, but my daughters marched, one in Washington DC and one in New Orleans.

I saw a photo of Eleanor Roosevelt's statue in Riverside Park NYC wearing a pink hat! May her spirit always be with us.

KM, it was a peaceful demonstration. Even the hecklers were pretty much ignored. This is what America is all about, or should be about.

Margaret, at least you were able to march vicariously through your daughters. Eleanor Roosevelt is a woman to really admire. I visited her little getaway home near the Roosevelt museum some years ago. It was touching, I remember, to think I was in her home.

My daughter and I were going to participate in the Atlanta march, but sickness prevented our travels, so we marched her in Statesboro. 200-300 of us -- male and female, children and adults, a gathering of diverse races and orientations and ability levels and religions. Like the USA itself. Thank you and your family for adding your voice. And feet.

I couldn't make the march. I have marched to protest the war in Viet Nam. I definitely support the goals of protecting rights and opposing "alternate facts."

Great Blog, Gloria. Great pictures. Portland, and other cities in OR marched.
PDX is proud to wear our 'safety pins' with pride.
Stay vigilant, expose all 'alternate facts'.
Patg

Good for you, Gloria, getting involved and making your feelings known.

I couldn't make the march but my daughter marched for me - in Seoul, Korea! I love all the pictures of the different signs, Gloria. So glad that all these marches were respectful and free of violence.

How very neat that you will be in the National Archives! I marched in Maui, Hawaii -- my first march ever. I have a feeling it won't be my last, though!

Tina, I'm sure you enjoyed the camaraderie of all those marching for the same purpose even though it wasn't the big event you wanted to go to.

Warren, I know you backed us even though you couldn't make the march. I heard Portland had the 6th largest march in the country.

Thank you, Grace. It was an awesome day.
Shari, Wow! I knew the marches were going on all over the year, but how cool your daughter marched in Seoul, Korea. I wish I could have included all the pictures I took, and even more
so the many, many much clearer pictures my daughter took.

Lourdes, Hawaii! That is so great. I'm sure you will be marching again. I know I will be.

I haven't marched but I've protested a few times at gatherings. I couldn't march this time, had to give a speech, but I enjoyed hearing about marches in Asheville, NC, Raleigh, NC, Boston, DC, AND NYC. Friends went, and others who didn't go but sent photos. Good to see the variety, the men, and the range of ages, and the signs. Judy

Judy, I'm sure other marches are coming up and maybe you can march in them. I know you've stood up for a lot of important things over your lifetime.

I admire you for taking part AND for writing about it, Gloria! I'm also happy to read on this blog about others who took part in some fashion. I've never marched for a cause, although I'm very proud that my daughter has recently taken part in some rallies in Austin against the pipelines. I was never much of an activist, but have been making calls and signing many petitions lately, as I see alarming changes and things falling apart around me. I guess that it's never too late to become more aware and to take a more active part. There's hope for me, yet!

Yes there's hope for you, Becky. I've been signing letters to send to senators and congressmen. I also made calls back when I was still teaching to get people to vote for the school levy. Every little bit helps.