A Visit to the Jane Austen Centre Ah, Bath! Although I enjoyed the beauty and history of this ancient English city, those attributes were not the primary attraction when I visited in December. For me, the thrill was walking the cobbled streets of a place Jane Austen lived, a place that she featured in several of her books, a place that shaped her personality and worldview.

Jane had lived with her family for twenty-six years in the quiet village of Steventon when her father, the Reverend George Austen, decided to retire to Bath. Though she lived in Bath for only five years, from 1801 to 1806, her observations and experiences shaped the stories she wrote and provided settings for Northanger Abbey and Persuasion.

In Jane Austen’s time, Bath was the resort city, the place to see and be seen, a place to display one’s wealth, a class-conscious fashion show, which Jane found fascinating, ridiculous, and exclusionary. Jane’s family’s aristocratic connections opened many doors to her, but her clergyman father’s small income meant that in most settings, she would be the poor relation. It’s easy to see how Jane created characters like Elizabeth Bennet and Mr. Darcy, two people wrestling with the challenges of their different social positions.

Jane and her family visited Bath several times in the latter 1790s—one trip was for her sickly brother George to try the baths and see that newfangled invention, electricity—but in 1801 her father decided to retire there. Her father’s sudden and unexpected death just four years later left the family in financial straits, and they made two moves in the city, each to successively less expensive quarters. Finally, Jane, her mother, and sister, Cassandra, had to move back to the country to live with family in Chawton Cottage, Hampshire.


Today, the Jane Austen Centre is located at 40 Gay Street, close by Number 25, where Jane, her mother, and Cassandra lived for six months after her father’s death.

On a cold, rainy day, I left my husband warm and happy in a pub and joined the mostly female mob outside the Centre. Standing at the door was a jovial doorman dressed in Regency regalia—top hat, cut-away coat, breeches, and riding boots—and a life sized wax figure of Jane. The wax figure is based on a watercolor that her family thought looked nothing like her. Fans of all nationalities and ages posed for photos with the statue. I imagine Jane would have found the scene amusing.

A docent in a long, yellow Regency dress gave an informative introduction and then we in the mob were free to walk through the house at our own pace. Exhibits showcased the dress and customs of the time, including a chart that finally explained what characters mean when they say “he has 700 a year.” (Seven hundred pounds was the yearly income at which a person could afford a carriage, a very important status symbol.)

The townhouse is decorated in the style of the time. One can try writing with a feather pen, dipping the nib into ink and scratching words on thick paper at an antique table. Sadly, almost none of Jane’s personal possessions survive, which was less surprising after I learned of her family’s financial straits and her obscurity as an author during her lifetime. I was glad that I had visited the British Library a few days earlier. Her writing desk is on display in the Library’s collection, an intricate leather case with multiple drawers containing storage for ink and pens—probably the iPad of its time. 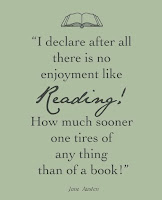 Several of Jane’s novels did appear in print during her lifetime (Sense and Sensibility, Pride and Prejudice, Mansfield Park, and Emma), but all were ascribed to “a Lady.” After her death in 1817, Northanger Abbey and Persuasion were published with a foreword by her brother Henry, which finally credited her as author. Jane’s name had never appeared on her works during her lifetime.

So little is known of Jane Austen. We’re not even sure what she looked like. But so many crowd the museum, so many love the essence of the woman revealed in her work.

Have you ever visited the home of a favorite author?
Posted by Shari Randall at 12:00 AM

Shari, thank you so much for sharing your wonderful visit. The one famous author whose home I've visited is Thomas Jefferson. Maybe it will be a good new year's resolution to add some fiction authors' homes to my list!

It’s fun to visit authors' homes and in some cases see existing the same general environment that they wrote about. Walking the land Lucy Maud Montgomery wrote about in Anne of Green Gables or touring Hawthorne’s House of the Seven Gables in Salem, MA, or visiting Concord where Hawthorne lived at the time, as did Louisa May Alcott of Little Women fame, not to mention Emerson and Thoreau. In Savannah we have Flannery O’Connnor’s residence.

It all fits with my general feeling that to understand a place you have to walk it.

What a fun trip! I'll have to put it on the agenda for my next trip to England, although my husband and his friend, who lives in London, are military history buffs, and mostly we visit places like Churchill's underground bunker and the HMS Victory.

I've been to the New England sites Jim mentions, but Flannery O'Connor is an old favorite, so I'll have to put that on my bucket list.

I loved visiting Bath...the Abbey, the Baths, Assembly Rooms, Crescent. We didn't visit Jane's house during our packed day-trip so I assume it was closed.

We visited Monticello but I can't think of anything else. Twain's house in Hartford and Flannery O'Connor's farm outside Milledgeville are on my bucket list as well as the Concord sites.

I visited Bath when I was a teenager, but we didn't explore Jane's house. I haven't visited any other author's house, but your trip sounds fantastic, Shari. Glad you made the trip and enjoyed it.

I didn't realize her name wasn't used until after her death. Thanks for taking us on this trip!

Life would be so boring without a Jane Austen book to turn to. My husband I visited Bath two years ago and followed Jane's trail throughout the city. I can see how the place inspired some of her books.

I once got to visit James Norman Hall's home in Tahiti. He wrote "Mutiny on the Bounty." It was a terrific experience seeing where he wrote the book in such a tropical setting--not too different from the island of Pitcairn where the mutineers ended up.

This is lovely, and the pictures-fantastic. It's so hard to believe that we know so little of Austen or that her name was not associated with her work during her lifetime. Was that part of the old stricture of a lady's name appearing in print only twice, once at her debut and again at her marriage? Or was it due to Jane's insecurity in her writing? I wonder, did her publisher know who she was?

I have visited the Bronte house, taken by my parents to see the residence, and I confess, I remember nothing. All of my "memories" of the house are based on my reading of Little Women. I also visited William Carlos Williams' house in Rutherford NJ. Actually, I was there as a patient of his son. His son was covering when my regular doctor was on vacation, and because we were not regulars, he asked if we would like to see the house. My mother was thrilled. The only room that was left untouched (the son and his family lived there) was the study. It was filled with dark wood and books.

Hum, never visited the Bronte house, but my spell check must have. That should be Bronson Alcott house!

Hi Paula, I think I'm going to make a bucket list of authors' houses to visit. I know folks who visited every major league baseball stadium, every President's home....A fun list to pursue. Hadn't thought of Jefferson as an author. Monticello is impressive, isn't it?

Hi Jim, Your point is excellent - walking in the footsteps of an author, seeing the sights they would have seen (mostly, making allowances for the passage of time) brought Jane alive for me.
Wasn't the House of the Seven Gables grand? I saw that when I was a little girl and it made a big impression on me.

Hi Kathleen, I, too, was dragged to the Churchill War Rooms and Greenwich (Cutty Sark) and despite my reluctance, enjoyed them! Still, I'm glad I got to see Jane's place.

Hi Margaret, You, Kathleen and I should plan a trip to Savannah! I love Flannery O'Connor.

Hi Elaine, Thanks! Funny all the places we saw when we were young and can't remember. I dragged my kids through Paris when they were young and their favorite memory was buying Nutella crepes from a street vendor.

Hi Carla, I guess ladies were not supposed to do something as public as writing a book? I wish I had thought to ask the interpreter more about that.

Hi Grace, Wasn't it wonderful to see where she lived (if even for a short time). Your trip to Tahiti sounds wonderful - I hope you'll write about it and share pics.

Hi Kait, Spellcheck! How I love to hate it! I wish I had thought to ask more Jane's publishing history. I got the impression that the publication happened because her brother brought her novels to the attention of the publisher and that she, as a woman, could never have transacted that kind of business. But I'm guessing.
How cool that you got an inside view of the Williams house! Doesn't it bring them to life?

Shari, I've been to Bath also, but I didn't see the Jane Austin museum. I love her books.
I've visited Emily Dickinson's home, Ralph Waldo Emerson's home, Louisa May Alcott's home, the replica of Henry David Thoreau's house he built on Walden's Pond, Hawthorn's house, Jefferson's Monticello, Edith Wharton's home, and probably others I've forgotten about right now. Whoops! I forgot William Shakespeare's home, and a poet's home in the Lake District of England, whose name I'm forgetting right now. I loved your pictures and hope I can return to the British Isles someday soon.