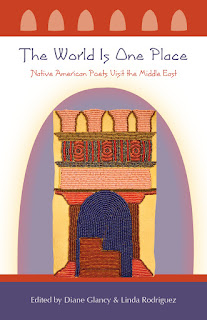 I hold in my hands a beautiful book, an important book. It's been a labor of love to put this together, struggling with the herding-cats nature of organizing a number of writers to get their work, bios, and contracts in to meet deadlines. To carry a project from the first bright idea through mounds of paper and emails to the final finished book is always a thrill. Now, I hold an ARC of this anthology in my hands, cover glowing.

I'm truly proud to announce that this anthology I co-edited with the wonderful Diane Glancy, The World Is One Place: Native American Poets Visit the Middle East, will be published in February 2017. We have a fabulous list of contributors: Joy Harjo, Linda Hogan, LeAnne Howe, Jim Barnes, Kimberly M. Blaeser, Natalie Diaz, James Thomas Stevens, Bojan Louis, Allison Hedge Coke, Travis Hedge Coke, Kim Shuck (who also did the gorgeous beadwork used in the cover design), Trevino Brings Plenty, and Craig Santos Perez. All of these highly regarded Native poets (many of whom have recently earned various major national awards for their own work) have written poetry about their experiences of the Middle East and the land and people they encountered there.

We'll have a panel about the anthology at the huge national conference of the Association of Writers and Writing Programs in Washington, D.C. in February 2017 and an offsite reading, as well. There will be two New Letters on the Air national public radio programs about the anthology, and we'll have a local launch in Kansas City with Haskell Indian Nations University and the Kansas City Indian Center involved, as well as local library systems and universities. Just the beginning of things we've got planned for this important book.

The World Is One Place will be an excellent choice for teaching since each poet has a work note, discussing the creation of the work by that poet in the anthology, plus there are informative essays at the beginning and end of the book. The book as a whole brings the reader a picture of the people of the region as human beings, not solely as victims or refugees or participants, willingly or unwillingly, in warfare. The contributors to this book underline the connection between the experience of many citizens of the Middle East and the Indigenous population of the United States.

The concept for this anthology was originally inspired by the firestorm that surrounded Joy Harjo’s decision a few years ago to honor her commitment to visit Israel, hoping to spark a dialogue, in spite of the movement to boycott Israel for its appalling treatment of the population of Gaza. Even as she flew across the ocean, people texted, emailed, and messaged her, calling names and threatening her for her decision. We wanted to gather a range of Native voices and experiences with no prior selection or restraint of what attitudes they should take to the tragic violence in the Middle East.

We could have ended up with a bunch of political screeds and rants—and we weren't sure that we wouldn't—but fortunately, all of our poets chose to focus on the spirit of the land and the people. In essays at the beginning and the end, the editors address some of the political situations and provide some facts about the United States' relationship through the decades with the Middle East. But the overwhelming focus of the book is the poems and the portrait they paint of families and individuals.

As I say in my closing essay, "Are Our Hands Clean?,"

“Song has always been central to Indigenous culture and is one aspect that is found in all of the more than five hundred nations. We sing to pray because we believe the world was created to be harmonious and balanced, and we seek to bring it back into that harmony and balance. We sing to communicate with our Creator. We sing to heal and to celebrate. We sing to give honor to those who have traveled on before us. We sing to ask for their help in our own journey and to ask those whom we leave behind to remember us and what we tried to do.

“This book is our song.”

Email ThisBlogThis!Share to TwitterShare to FacebookShare to Pinterest
Labels: Anthology, Diane Glancy, Linda Rodriguez, The World Is One Place

What a wonderful project! I'm sure it entailed more effort, on the part of many people, than I can imagine.

Congratulations on completing it.

congratulations, Linda. What a fantastic cover. and what a wonderful project and story.

What a great feeling to see all your hard work in print. Congratulations and best of luck with the sales part of the project.

Congrats on the anthology--and see you at AWP!!!

What a wonderful project. After all your blood, sweat, and herding of poets, to finally hold that book in your hand must have been extra special. I am so happy for you and your authors!

Linda, congratulations! I think your hard work created a book I'll cherish and love. Let me know when it's available to order.

Thanks, Julie! It is pretty fantastic. I'm very proud of the work we've gathered.

Thanks, KM! Oh, my, yes, once Diane and I turned over the final manuscript, the publisher, his assistant editor, three graduate interns, and another full-time staffer all worked on it.

Thanks, Kait! It is a great cover, and Kim Shuck had also done other beadwork portraits of places in Petra that inspired her, so it was a hard choice.

Thanks, Jim! Fortunately, I won't have to do a lot with sales, other than let everyone I know know about it and how great it is. The university publisher that's publishing it will deal with most of that.

Oh, Art, will you be at AWP? We must plan on getting together. I know it's always terribly busy. My own calendar is already starting to fill up, but let's try to meet for coffee or lunch or something. My email's lindalynetterodriguez at gmail.com.

Shari, it was. NEA funding is very competitive to obtain, so it feels wonderful that they believed in us and our project.

Thanks so much, Warren!

Thanks, Gloria! It's coming out next month. I've found that university presses don't do a lot of pre-orders, especially with poetry. I'll check to see if they're setting up for that with this.