An Interview with Mary Miley by E. B. Davis

We all had secrets we didn’t want broadcast to the world—I myself
was a swindler and a bastard and had spent some time in jail for theft—so
I appreciated the virtues of a closed mouth.
Mary Miley, Renting Silence (Loc 1166)

Can 1920's script girl Jessie do Mary Pickford's bidding and uncover a real killer?
When Jessie is asked by her idol, the famous actress Mary Pickford, if she can do some private investigating for her, Jessie reluctantly accepts. A girl was found stabbed in her bedroom with another woman lying unconscious on the floor next to her, a bloody knife in her hand. With no police investigation into the murder, it’s up to Jessie to hone her amateur detective skills and prove the girl[’]s innocence before she hangs for murder.
https://www.amazon.com/ 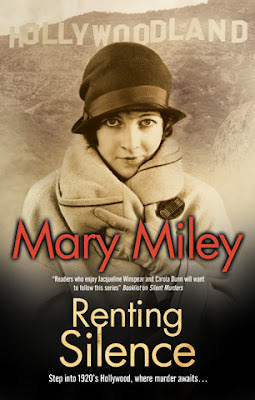 For older readers or historical enthusiasts, Mary Miley’s 1920s Hollywood series teases memories. Stars from our grandparents’ era come to life and test our knowledge. We know of Mary Pickford, Douglas Fairbanks, and Rudolph Valentino, but who is Leslie Hope? The names in Renting Silence begged research. Perhaps I had known that American comedian and icon Bob Hope started his career as Leslie and was born in England. But I didn’t know that the studio formed by Pickford and Fairbanks became United Artists in later years. In an era when most women couldn’t obtain a mortgage without having a husband, Pickford, America’s Sweetheart, takes on a much greater role than movie star.

I usually start reading a series at its beginning. For this interview I did not, but I wish I had. There are aspects of main character, Jessie Beckett’s life that were alluded to in Renting Silence, the third book in this series, that I wanted to explore and assume were contained in previous books. What I didn’t expect? Murder motives change with the mores of the times. For a mystery reader, that’s refreshing. I enjoyed reading this book, which took me away from the 21st century and plunked me down into the roaring twenties.

Your research for this series must have been extensive. Did you use all secondary sources, or did you have an opportunity to interview any of the stars’ younger associates or relations of this era?

I love doing research! No surprise there—I’m a historian—but because of that, I understand the limits of secondary sources, which is why I rely so heavily on primary sources. I’m particularly fond of autobiographies by people who lived during this era and photographs of places, people, and events. I make it a point to track down novels written during the Twenties—and not just famous ones like The Great Gatsby—so I can get a feel for the language and vocabulary of the time. Especially helpful are the Beatrice Burton novels (chick lit, we’d call ‘em today) that provided a treasure trove of detail on fashion, food, cars, train travel, and other features of daily life you’d never find in history books. 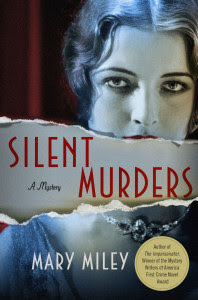 But one of my most valuable primary sources is silent movies. I started ordering them through Netflix and quickly learned a lot about the mundane details of daily life and film production that don’t appear anywhere else. What sort of things? What offices, stores, and hospitals looked like, how to make a telephone call from a hotel, what a typical telephone operator wore to work, and whether a policeman’s badge in those years included his name (It did not).

Another primary source is the material culture of the era. Stuff. I collect antique vaudeville programs and magazine advertisements, which have been singularly helpful in portraying life in the Twenties. So are doctors’ prescriptions for medicinal alcohol, which I also collect. And how did I know how Jessie’s flapper dress was so very heavy? I have two beaded flapper dresses that date from 1925—they belonged to my grandmother—and boy, do they weigh a ton!

How do you know what research to include and what to discard?

When you immerse yourself in a certain period as thoroughly as I have and for as many years as I have, you get a feel for what’s dodgy and what’s accurate. For instance, I find online lists of slang terms (secondary sources) that were supposedly used in the Roaring Twenties . . . fine, but used by whom? Gangsters or office girls? Black or white? Rich or poor? I’ve never seen some of these slang words used in the books I read that were written in those years (primary sources). So I don’t trust the lists. I always opt for primary sources over secondary, and that keeps me pretty accurate.

Does research give you ideas for plots?

Sure! For example, the general plot for Silent Murders is based on the unsolved murder of William Desmond Taylor, a powerful Hollywood director, in 1922. The chaos and botched investigation surrounding his death provided inspiration for my own story. In Renting Silence, Jessie’s interaction with the Ku Klux Klan in Indiana was inspired by the true story of Madge Oberholtzer who was kidnapped, raped, and murdered in 1925 by the head of the Klan in Indiana.