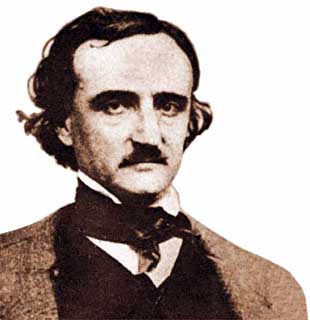 Publications: A Review by Warren Bull

I approach this review with some trepidation. Poe invented the detective story in 1841. It is impossible for me, or anyone else today, to read him like his first audience did. This edition of his works includes a brief biography and a commentary on his life and achievements, which helps to orient the reader to some of Poe’s accomplishments. His entire literary career, that lasted only fifteen years, was spent struggling to make enough money to support himself and his wife. They lived at a  subsistence level almost all the time.

His earliest biographer viciously lied about him, apparently in response to Poe’s criticism of that author’s work. That author is now remembered almost exclusively for his malicious biography of Poe.

During Poe’s lifetime he was probably better known as a literary critic than as an author. However, it is his poetry and prose for which he is most known. Poe was an American original. In the first detective story ever written, The Murders in the Rue Morgue, Poe starts the story with pages describing the type of analysis he labeled “ratiocination,” which his detective uses. Although this has limited usefulness to the modern reader, Poe doubtlessly had to explain the process to the original readers since his was the first description of it. The story as a detective story is till a solid piece of work.

I remember once asking a young man what he did in his job at a medical laboratory. He started by saying, “You’ve heard of E = MC squared, right?” After that he took me through several steps ending in the use of a tiny amount of radioactive material being injected into a person to trace a metabolic process — more or less. I think. I suspect my experience was like that of Poe’s early readers.

In addition, Poe wrote tales that evoke wonder and mystery. The Tell-Tale Heart and The Fall of the House of Usher are two examples. A genre of his I had not read before was The Hoax. Like it sounds, this is something written to deliberately mislead the reader. The Unparalleled Adventures Of One Hans Pfaal was a description of a balloon ride to the moon written before Jules Verne wrote about a similar trip. The work was pretty easily identified as a hoax in large part because of the jocular language Poe used.

Read for the first time, Poe’s works still evoke strong emotion. I admit to the chills down my spine, and the anxiety his words created in me. If I were advising someone today who had never read Poe, on what might best give some sense of the man’s genius I would suggest the short stories. The Pit And The Pendulum, The Tell-Tale Heart and The Cask of Amontillado would do. But I may just be showing my personal fears. You might suggest others.

I have two sets of the complete works of Edgar Allen Poe. One I received as a birthday present in high school; the other I acquired when I purchased my grandfather's library. I read with enjoyment the entire collection, which included some of Poe's literary criticism. As with any author, some works are stronger than others, but you have to give Poe terrific marks for being a visionary in style and content.

Poe, of course, is classic.

My book club, which indulges in periodic "field trips," visited the Poe house in Baltimore.

The tradition of three roses and bottle of cognac left on his grave is no more, but the stories live on, particularly the three you mention.

I have a complete works volume of Edgar Allen Poe, which I've read, but I also use as a reference. Suspense and horror rolled into one writer whose writing can't be simulated even though I try.

Twain and Poe were my teenage writer-idols. During my senior year, I wrote a research paper (complete with bibliographic footnotes) on Poe. His life, it seems, was nearly as colorful as his works. Thanks for bringing up a few memories, Warren.

Poe was an amazing writer. I always enjoyed teaching Poe in my American Lit courses at the high school level. The students really connected to both his life and short stories.

The memory of some of Poe's works still give me chills. I'll have to revisit them and see if they still have the same effect.

I agree with Jude - Poe is one of my literary idols. His vision, his tragic life, his invention - so much to admire and contemplate.

I haven't read much Poe in years. Now I'll have to look through my books to find some of his works to read. What I remember most is his poem "The Raven." and some weird short stories.

Poe's stuff scares the Buh-jeebies out of me. What a master.

I read Poe in junior high (long before I discovered Sherlock Holmes)and thought of him as a grim writer of violence. Then I read "Some Words with a Mummy". He was a wonderful humorist, too.