Visiting the Isle of Palms 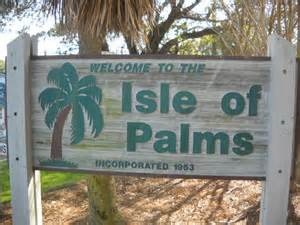 I first journeyed to the Isle of Palms, a South Carolina barrier island, to attend a Lowcountry Romance Writers (LRWA) beach retreat. For a number of years, the LRWA rented a beachfront house large enough to accommodate almost twenty where we balanced time between classes, eating, and lounging on the large porch or walking along the ocean’s edge. The location drew some excellent instructors, including Mary Alice Monroe, Bob Mayer, and Jennifer Cruise. It also attracted participants who could sign up for a “hermit week” of residence to concentrate on writing after the retreat.

The Isle of Palms is in Charleston County, just minutes from downtown historic Charleston (across the Arthur Ravenel, Jr. bridge), and nestled between Mount Pleasant and Sullivan’s Island. If you want to take a virtual visit through fiction, try Mary Alice Monroe’s The Beach House or Dorothea Benton Frank’s Isle of Palms.
Access is by the Isle of Palms (IOP) connector, which passes over the vast expanse of the Intercoastal Waterway and a green salt marsh offering a calm, serene welcome--the feeling I imagine that visitors to Brigadoon must have encountered when they entered the surrounding clouds and heard the sweet voices singing. All cares and concerns remained on the mainland. On the island, peace and relaxation awaited.

Since that first trip, I’ve made a number of visits. Each time, I find the same sense of comfort and delight wash over me when that green salt marsh comes into view. I know the vacation has begun.

At the end of the connector is a small town, with local government entities, like the town hall and fire station, and small businesses. Straight ahead and to the right is Ocean Boulevard, with hotels and restaurants on the beach side and public parking and a mall of small stores and eateries on the inland side. This is a place where you can come and stay in a variety of accommodations, or you can just make a day trip, park, cross the main thoroughfare, walk down the boardwalk, and stake out your place on the sand.

If your interest is history, the Isle of Palms has it. The original habitants were the Sewee tribe. The name “Sewee” means “Islander.” In the late 1600s, the tribe had a flourishing business trading deer skins for manufactured goods and beads with the colonists. When the Sewee learned they were receiving only five percent of what the buyers in England paid the colonists, they built a navy of canoes and sent their able bodied men and women with hides and possessions to trade directly with the English. Their canoes were no match for the high seas. The Sewee who survived the waves were captured by an English ship and sold into slavery. The children, elderly, and infirm left behind disappeared, probably from disease or warfare, by the 1700s. 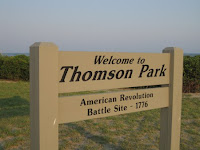 At Breech Inlet, Thomson Park, named for Colonel William “Danger” Thomson, commemorates the 1776 successful defense of Charles Town from the British army’s attack. This also is the area where the H. L. Hunley submarine was launched during the Civil War. I had the opportunity to attend the ceremony dedicating Thomson Park. My friend Susan Craft, who writes historical novels, was among the exhibitors featured. The Park and Inlet area provides a lovely spot to enjoy the ocean. Often, you see people fishing or flying kites there.

Seafood is fresh and plentiful. My favorite restaurant on the Isle is the Acme Lowcountry Kitchen. It offers local shrimp and fresh catch as well as pimento cheese grits and is frequented by residents, who will warn you to come early in tourist seasons. Nearby Sullivan’s Island has a number of restaurants, including Salt at Station 22, with a Culinary Institute of America trained chef who has developed strong ties with local farmers and fishermen to produce excellent lowcountry cuisine. Also, residents share their bounty with visitors. St. Mark’s Lutheran Church has offered lunch for summer visitors on the fourth Sunday of each month. When I’ve attended, there have always been fresh tomatoes and garden vegetables along with Southern hospitality.
If you are headed back to Mount Pleasant from the Sullivan’s Island side, take the Ben Sawyer bridge, but be aware that you might find yourself waiting. The Ben Sawyer is a swing bridge that opens to allow passage of ships. If you’re in line during an opening, get out and enjoy watching the slow water parade.

Another reason that I’ve stayed on the Isle of Palms is its proximity to Mount Pleasant, where the Village Playhouse (now the Village Repertory Company at the Woolfe Street Playhouse) used to be located. Since that excellent theatre company has moved into a building on the edge of Charleston, the IOP is still a good place to stay and be close to both good productions as well as food and the ocean.

Mount Pleasant is a lovely town with plentiful shopping opportunities in its Towne Centre. I often find myself frequenting the large Barnes and Noble, which features books, audio, and a great coffee bar.

Sorry, Sam. When being on the Isle of Palms is an option, I have to agree with E.B.--beach life is the best.

Do you have a favorite beach and will you be there during the upcoming holiday?

Paula, it sounds like a delightful spot. Since it is more than an 18 hour drive to the nearest ocean, beaches no longer figure into my summer destinations. However, I used to love Long Beach Island in New Jersey where there were miles of beach past the main areas where I could get away from the crowds and have only a few people and lots of shorebirds in view.

It sounds like a wonderful place for a writer's retreat! Although I'm afraid I would spend so much time out on the beach I wouldn't get much writing done. Sand & water are not good for computers, even laptops.

Every couple of years my husbands' family has a reunion in Ocean City, NJ, at the end of the island near the nature preserve. They went there for a week every year as kids, and now they take their mother (who lives in Cheyenne) for a week.

I remember fondly the short stay we had in Isle of Palms many years ago. We stumbled on it by accident trying to find a place along the coast that was more natural than the larger beach towns we had passed through. It was delightful. Enjoy your stay there.

Paula, as you know, I love the Isle of Palms and Mt. Pleasant. Thanks for the shout out! Great article and pictures.

The LRWA retreat sounds like it was terrific! I love the idea of a "hermit retreat" in a beautiful location too. I have many favorite beaches, but haven't been to Isle of Palms. It's now on my must visit list.

Paula, it sounds like a lovely place, and I love your pictures. The only beaches I'm close to are on Lake Erie, but I've visited Atlantic and Pacific Ocean beaches as well as those along the Great Lakes.

Soooo pretty, Paula! I want to go! My favorite beach is Palm Beach. It's actually not as fancy as you think. It's pretty bare and that's how I like it. There aren't lemonade stands or pricey cabanas or a place where you can rent water toys. It's just the beach and the ocean. The fancy folks who live there don't want a dog-and-pony show. So, I found I really enjoyed that over the other public beaches when I lived in South Florida. It was just the perfect speed for me. For my fair skin, however...not so much! SPF 50 was my friend.

Gorgeous and glorious. I love the Ravenel (did I spell that right>) Bridge. I've never been to Isle of Palms. Now it's on my places to go list.

Jim, you might enjoy looking at Turtle Summer, a children's book and companion to the adult novel Swimming Lessons, written by Mary Alice Monroe. In it she describes the nesting cycle for the loggerhead turtles and also comments on native birds on the Isle of Palms. One year at our retreat, she arranged for a release of rehabilitated loggerheads, injured by propellers, nets, or disease, back into the ocean. She sponsors a special rehab fund at the Charleston Aquarium. See http://www.maryalicemonroe.com/site/epage/16271_67.htm

K.M., it is a wonderful place for a writers' retreat. Unfortunately, when so many writers are gathered at the beach, they usually spend more time talking and watching the waves than writing.

Grace, while the LRWA retreat was shorter and not on the beach this year, it was delightful. Good food, good friends, and a wonderful location. So glad you enjoyed your time there.

Susan, me, too! We've had some great times there, haven't we? Now, are you working on the ideas you developed at the retreat?

Kara, hermit week always came after the program, so that people would be anxious to get back to writing with all the new information they had acquired. I never stayed during hermit week, but envied those who did!

Gloria, it's been years since I visited the Great Lakes, but I remember some beautiful shores there, too.

Sarah, Palm Beach sounds wonderful. I'm with you. I'd need the SPF 50+.

Kait, I love that bridge, too. Greg Rawls, a friend of mine, captured it in glass. Here's the link: http://www.gregorieglass.com/Glass_Bridge.html.

Ah, wish I were walking that beach with you! Enjoy your beach time, Paula. I don't have any beach getaways planned for this summer, but perhaps I should fix that! I'd like to go back to St. John in the Virgin Islands…lots of sand, not a lot of people, and good food nearby.

Shari, St. John sounds heavenly. Definitely get a beach vacation on your schedule!