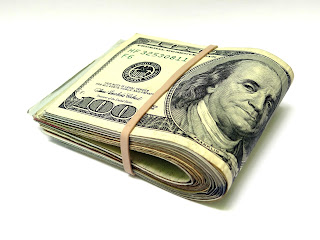 Obviously some athletes start with their savings from being a player and build their net worth beyond that.  Michael Jordan and Karl Malone are two examples. However, in this blog I'm writing about those who did not.

I have no idea of what I would have done in my early adulthood with the money players earn at their early twenties.  Young men without knowledge or experience in finances are easy picking for people who want to live on the bounty of their incomes. Sadly, this often includes friends and family members.  One player received a birthday card with a payment due notice. His mother asked to be compensated for the cost of raising him.

Another player got a check for a million dollars from the organization that signed him.  The organization noticed the check was not cashed for several weeks.  One of the employees contacted the man and asked if he had cashed the check. The player answered, “No. I framed it and it’s hanging on the wall.”

Many players try to start charities, intending to give something of value to the community.  However, the charities have a nasty way of becoming piggy banks to the player’s family members and friends who “work” in them.

A cell phone app existed that notified subscribers when professional athletes entered nightclubs and other venues.  Apparently when a notice was sent out dozens of women would show up with the hope of attracting an athlete’s romantic interest.

Athletes who are extraordinarily competitive carry their intensity over to cars they own, jewelry they wear and houses they buy.  Feeling “bullet-proof” and having an over-sized ego are helpful characteristics of an athletic competitor.  They are liabilities for planning for life after retirement.  Careers tend to be short, especially compared to the life span remaining after retirement but few people develop long-term goals.

Typically an athlete will suddenly go from very high income to no income at all. Few have developed skills needed for post-athletic jobs.  Universities discourage or prohibit these people from exploring financial planning with agents or their representatives.  Often family members or friends with no understanding of fiscal matters ask or demand to take on that role.

Many athletes, finding retirement is draining their assets will take desperate risks and make investments that sound plausible to them.  One retired athlete was offered the chance to invest in tomato seeds.  Inquiring about the investment he was told that the seeds would grow gigantic tomatoes and everyone needed more tomatoes.  Many people open restaurants hoping their fame will guarantee success and not knowing how to operate such an enterprise.  The great majority of these restaurants fail.

Womens basketball icon Sheryl Swopes, after an 11-year professional career, lost an estimated 50 million dollars and a storage locker full of personal mementos when she was unable to pay the monthly storage fees.  Unlike many athletes, she was able to stop the slide. She is now a college coach.

I don’t find it surprising that athletes are often ill prepared for life after sports.  What do you think?
Posted by Warren Bull at 12:00 AM

My daughter isn't talented at math. When she was at VA Tech, there was a math requirement. Students were bused over to a "math lab" where they took computer taught math and then took tests via the computer. There was no human teachers or human contact at all. She had difficulty. There were two courses listed for human taught math courses. Every semester she jumped up at dawn to try and register on the first day when the classes were open to get into those classes. I finally called the head of the computer lab, who admitted those classes were only for the football/other athletic team players. I guess it was good of VA Tech to help their athletes, but it also ticked me off. My daughter finally took the math courses at another college, which provided a human teacher, and transferred the credits to Tech.

No Warren, it doesn't surprise me at all that athletes are programmed for one career. As early as elementary school, kids are asked what they want to do, like a ten year old really knows. Then they are directed toward that career limiting them. It's no wonder it takes longer and longer for many kids to get through college. If they change their minds once about their major, there are so many requirements to jump through, two more years of school isn't untypical. Ca-ching! They aren't the only ones who are programmed to do only one thing. A CPA who decides he wants to be a pastry chef must pay for school to re-educate. If the athletes saved money, they could pay to educate themselves since their first "degree" was paid for by the schools. Maybe a life skills class should be included in that first degree on how to manage money.

Warren, I so agree with E.B. In the first place, many high school athletes who are good enough to get a college scholarship, also have acquired inflated egos from all the praise and cheering of them plus interviews by local newspapers. Also, according to research, kids really don't mature until around the age of twenty-five. One of my grandsons was an awesome running back for his high school and won a scholarship to a smaller college close by where he could live at home. However, it never seemed to go to his head. He remained the sweet and helpful kid he always was. He quit football after two years, and lost his scholarship, but fortunately he'd taken courses in business and now in his late twenties has a going business that is doing very well. I should mention that one of the reasons he quit the team is because the coach wasn't happy that he took up bull riding as a hobby. Fortunately, after several years of doing that and doing well at it except for one accident in which he was gored, he decided to quit that and settle down.

Yes, athletes are often pampered and admired early in their life and then abandoned once their careers are over. Clearly, the special treatment does them no favors. I've read about good high school athletes who declare for the sports draft. When they aren't drafted they are left adrift. Declaring means they are not eligible for college sports. Unless they and their families can afford college or get a scholarship or loan, their schooling is over.

So true and so sad. I agree with EB about the programming that goes on as far back as grade school. Fact is few make it in the pros, and of those who do, few manage to understand that they are going to age or injure out before they build that next egg. I think a lot of it is human nature, somewhere in our brains the status quo is believed to be the forever quo. It doesn't work that way for the big splashers.

A side story. Many years ago in the year of the perfect Miami Dolphins season, I was in college in Miami and worked a part time job as a waitress in a 24-hour diner attached to a bread bakery. Larry Little used to come in on a regular basis at breakfast time with kids from the neighborhood. He was mentoring them to help them break the cycle they were living in. It was wonderful to watch him with these children. It was even more wonderful to see the changes in them as they grew up learning from this man. I don't know whatever happened to Mr. Little, but if karma exists, he deserves the best!

I think you're right, Warren. When we're young, most of us think we're immortal. If we haven't come from abusive or violent homes, we don't think bad things can happen to us. This is even more prevalent if we've always been a successful athlete (because there is no one more admired in America). When injury or age stops our career, that attitude doesn't change overnight. Every college who uses athletes (because they're used by most colleges,not educated) should be required to provide them with an intensive course in money management that focuses on athletic careers.

Answering Kait. I looked up Larry Little. If it's the same man, I found him on Wikipedia, utube, and Facebook. Looks like a nice family man and he's running a charity for kids. So it looks like he kept up with what you saw earlier.

Warren, your post is so true about many who gain great fortune.