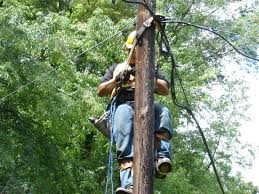 I don’t eat crow often. As much as I run my mouth, I should probably have it as a staple meal, but I’ve been lucky, or stubborn, enough to avoid it. It is also especially painful to be so wrong about something that involves your kids. But leave it to me.

On the rare occasion my kids complain about their lot in life, or even if they just say they’re bored, my head explodes. I explain to them, emphasizing almost each syllable, the ol' “When I was your age” argument. “When I was your age we only had three channels and an antenna. Uncle Mike had to stand on one foot with his right hand in the air for the picture to come in clearly!”

“When I was your age, the only people who had a microwave oven were on the way to the moon!”

“When I was your age, the Internet hadn’t even been invented! If we got bored, we went outside and played with the dog. You’ve heard of ‘outside’ haven’t you?”

Then I spent a year without cable television three days last week. It was hell. I can hear my parents now. “When we were your age we went outside and carved toys out of cow turds.” But honestly, what in the world did people do without cable?

My wife leased a condo in the city she’s working in. She brought my daughter and me there expressly to wait during the installation windows for the Internet and the cable service. On the first day, we had neither. I think I gained an appreciation for how God must have felt on day one when the world was without form.

I also gained an appreciation for how much a fourteen-year-old girl can talk when there’s nothing else to do.

Thankfully, the Internet installer showed up and from that point we could watch Netflix on the one television we had, which my fourteen-year-old commandeered. For hours I watched episodes of “Teen Wolf” without seeing a single werewolf.

Daughter: “The one without his shirt on?”

Me: None of them has a shirt on. “Him in the blue pants.”

Daughter: “No, he’s human. He helps them. The other guy is a demon and got paralyzed from the neck down.”

The next day, the cable television installer arrived. I wanted to hug him. In minutes we had more than a hundred channels of brain-zapping drivel, and I couldn’t have been more content.

By that afternoon, my daughter looked at me. “I’m bored,” she said.

I thought about my words carefully. “Let’s go shopping.”

And we all lived happily ever after.

How addicted are you to technology?
Posted by Sam Morton at 12:00 AM

Cable I could do without -- no problem. In fact if it weren't for Jan I'd save the money and not have it at all. Not having the Internet, however, would be a problem for me. It is how i stay connected with the world. I'd have the twitches after a couple of days and soon would be manufacturing a trip into town to use the library's free services.

I'm with Jim. The only thing I've watched on TV in the last month was the Belmont. And I could have done without that if I hadn't placed a bet with a friend.

But I use the internet a lot. I like my morning newspaper, and I do write a fair number of snail mail letters, but I'd be lost without my computer and its internet connection to the world.

My kids are adults now, and I do remember lots of complaints, but not about being bored.

Yes, I could do without cable, too. The fact is, my daughter watches television, but she does so on her computer, which will happen with more frequency as cable and satellite become dinosaurs and more live broadcasts become the norm on the Internet. How we get the Internet will determine what medium we buy.

I watch some evening news, and I did watch the Triple Crown races. I'll watch an occasional movie (mostly not on TV, but via the Internet), but only if I'm really bored and want to be social (which I think is ironic, but when I participate in watching, it's perceived as being social. If I read in the same room, they think I'm antisocial.).

Kids get bored, Sam. My answer: Take them to the beach.

When I was your age I used to walk to school and back home. It was three miles each way and it was uphill. Both ways!

Like Warren, sometimes I walked to and from school, not because there wasn't a bus that stopped in front of my house, but because I felt like walking. I lived in a rural area and spent much of my childhood outside at my grandparents farm next to my house. We didn't get a TV until I was fifteen years old. Today I don't watch much TV and don't have cable. In fact, my TV has been on the blitz for over a month and I don't miss it.

However, I would miss my computer and the internet. Even though I don't spend a whole lot of time on it, I do want to check my emails and WWK each day and respond to those who send me emails. I also use Google to research information for my blogs so yes, I'm loss when my internet goes down occasionally. For the biggest part of my day, however, I am not online, but busy with other things like gardening or reading.