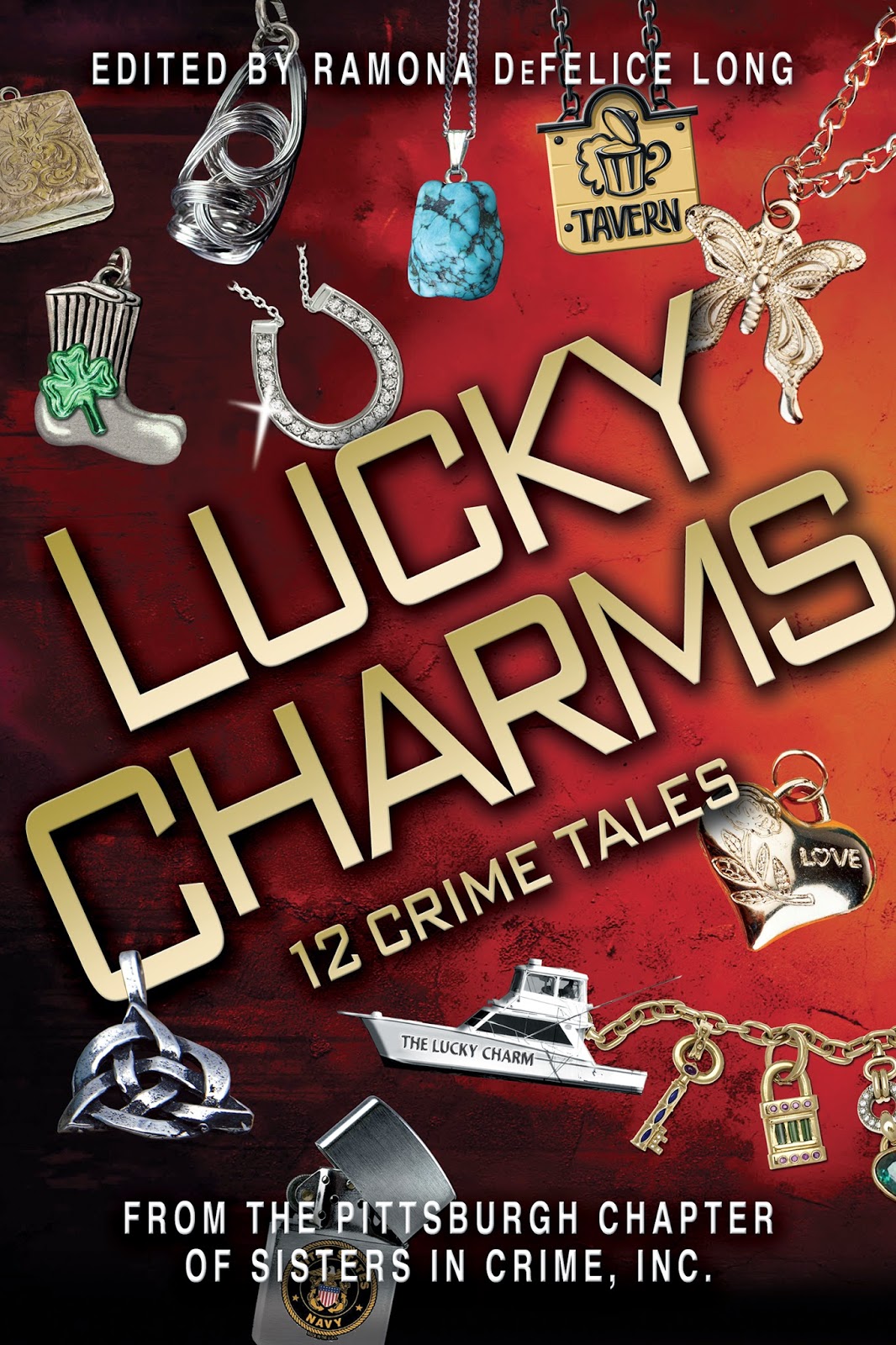 Most of the authors at Writers Who Kill write short stories as well as novels. Last summer, WWK blogger Paula Benson, interviewed short stories writers. This summer, Paula and I want to canvas editors and publishers of anthologies to promote short stories and to point our readers in the direction of some great reads. Summer is the perfect time to read short stories while hopping in and out of the pool, sitting on the beach, or to read round the campfire after hiking all day. This week we’re focusing on the Mary Roberts Rinehart Pittsburgh Chapter’s anthology, Lucky Charms - 12 Crime Tales. Please welcome Martha Reed, the chapter's coordinator.                     E. B. Davis

First off, thank you for inviting me to talk about Lucky Charms. It was a fun project. The Pittsburgh publishing team had a great time putting it together.


What prompted your chapter to create an anthology?


During a discussion of e-publishing, we realized that we could produce a cost-effective anthology in support of SinC’s mission statement: “To promote the ongoing advancement, recognition and professional development of women crime writers.” Lucky Charms was the first publishing credit for three of the 12 contributing authors. That’s an exciting statistic.


How large is your chapter?


We have approximately 45-50 members.


How did you develop a theme for your anthology?


We developed the Lucky Charms theme very early on. We had St. Patrick’s Day as our preliminary launch date, which suggested leprechauns. Annette Dashofy took it a step further and suggested using lucky charms. That concept unified the project. I also think it’s brilliantly reflected in the cover, designed by Karen Phillips.


Did your chapter develop a “local” theme to entice readers in your area?


No, we didn’t, but if we did it again I would strongly suggest using a local theme because it makes the anthology more marketable. The Virginia chapter of SinC produced an anthology where each story involved a local historic landmark. They’re seeing very solid sales because the anthology can get placed in those museum gift shops. It makes a great impulse buy.


How long did you give your writers to submit stories?


It was six months from the initial conversation to the submission deadline.


Did your chapter adhere to the guidelines set up for anthologies by SinC?


Absolutely. They were easy enough to follow plus we planned on asking SinC for an event grant for the launch party so we wanted to make sure we stayed inside the lines.


What was the response to the query for stories among your writers?


We received a very solid dozen stories. In the end, we used them all.


What were the criteria for selection?


1) Selection for publication was blind. 2) All authors whose stories were selected needed to be members of SinC International and the Mary Roberts Rinehart Pittsburgh chapter. 3) Story length was 4,000 to 6,000 words. 4) The story must include a crime and connect in some way to the Lucky Charm theme. 5) Only one entry per writer. 6) After expenses are recovered, royalties will be split between the contributing authors and the chapter. 7) Copyright remained with the authors.


Were the stories judged blind? How did you obtain judges?


Yes, as noted above. Tamara Girardi located 3 independent judges through her many contacts. It was our first hurdle in the project because one of the initial judges dropped out mid-stream and we had to find a replacement.


Did you hire an editor?


Yes. This was critical since our goal was to replicate the actual publishing experience as closely as possible for the contributing authors and we wanted to publish a high-quality product. We hired the amazing Ramona DeFelice Long who worked on the Guppies anthology, among many others.


Was any thought given as to the order of the stories in the anthology?


Yes, and we left that decision up to Ramona, as editor, to decide since she was the one who read all of the stories first. We trusted her judgment to suggest the best story flow.


How did your chapter find a publisher, and who published Lucky Charms?


Our chapter served as publisher using the new e-publishing options. Mary Sutton led the charge. She set up all the online accounts and formatted the lengthy anthology document.


Were you given a choice of covers?


Initially, we queried eight independent graphic designers. The Publishing Committee narrowed the choices down to three. We took their samples to the membership and the members voted for Karen Phillip’s awesome design.


How is your chapter promoting your anthology and do you have a budget to do so?


We had a great response at our launch party and sold 200 copies. We created an anthology page on the chapter website plus a Facebook page. Members tweeted and blogged plus some members have been meeting with book clubs in one-on-ones. We didn’t budget specifically for promotion but we did develop a budget for the larger project.


Do you think that there is a resurgence of interest in short stories?


I do, and I’m glad to see it. I love the short story format both as a reader and a writer. I wish more people would read Wallace Stegner. He was a master of the form. Of course, I also need to mention Margaret Atwood, Annie Proulx, and Louise Erdrich.


Have any of your anthology’s stories been nominated for awards?


Lucky Charms itself has been nominated for a 2013 Independent Publisher IPPY Award and Killer Nashville’s Silver Falchion Award. There’s hope yet for Bouchercon. Wish us luck!


Are you planning other anthologies?


Not at the local level, but as Chapter Liaison for SinC, I’m seeing a huge interest in future anthology development. Ten chapter anthologies are currently linked to the website and five more are in production. It’s a great way to support SinC’s mission statement.


For more information about SinC chapter anthologies, go to the SinC website. You can buy Lucky Charms at most of the retail outlets, such as Amazon. The Mary Roberts Rinehart Pittsburgh Chapter of SinC can be found online at http://www.pghsinc.com/our-members/  Thanks for answering my questions, Martha!
Posted by E. B. Davis at 12:00 AM

I'm happy to read about your experience with publishing an anthology with your chapter. I've suggested it to my chapter NEOSINC in the N.E. Ohio area, and I think this blog will create more interest. We are relatively new compared to your chapter although we've been together for at least six years or more before we actually took the steps to become a chapter. We don't have as many members as the Pittsburgh chapter, but we keep getting more and more.

Thanks for giving us an overview of how your anothology came together. It is a great project for the Sinc chapters.

I love short stories, both reading and writing them, and hope you're right that they are becoming popular again.

You've identified one way chapters can be of service and can further the goals of SIC. Congratulations.

It was quite the learning experience for our group. I feel honored to have been a part of Lucky Charms,

I want to thank Martha for answering my questions about her chapter's anthology. Martha works for SinC as the chapter liaison as well as for her own chapter (in addition to her writing). Her help kicking off this summer anthology series is most appreciated. Thanks, Martha! We'll look for more great stories from your chapter.

Thank you all for your comments. Anthologies are still one of my favorite formats - I bring some home from every convention! If you're a newbie writer, you can't do much better than joining the Guppies and submitting a story for their anthology. It's another great resource I should have mentioned.

From this side of the desk, I can report that the members of P-SinC were a fabulous bunch of writers and Sisters. There was a great sense of anticipation and camaraderie as the project progressed from a twinkle in Martha's brain through submissions, selection, editing, and publishing. The entire chapter got behind the 12 authors whose work appeared in the final product, and that kind of Sisterly support can be held up as an example for any chapter hoping to put together an anthology. It was an honor to work with the chapter and authors.

Aw, thanks, Ramona! You know we love you, too.

What a delightful cover. As a reader and writer of shorts (mystery and romance) I'm happy to see the increase in anthologies and proud that SinC (and its many local chapters) are at the forefront of this trend. Both the quality of the writing and the production of SinC anthologies is first rate. I'm looking forward to reading Lucky Charms.

Thank you for telling us all about the anthology - I love the concept!
I agree with Elaine. Short stories are perfect for taking along when traveling - anthologies are perfect beach books.

I had never written a short story until recently, and it's a whole 'nother ball game. Very challenging to put together a whole story in a few thousand words when you're used to writing 90K novels. I admire those who do it well. I'll be going to the launch of Carolina Crimes, a SinC anthology put out by the Triad Chapter of NC for North and South Carolina writers, and I look forward to the Guppies Anthology, Fish or Cut Bait. Great job, Pittsburgh authors, Martha Reed, and Ramona DeFelice Long.