“Bad news always wore winged shoes. And gossip danced with taps on its heels.”
Ruth Moose
Doing It at the Dixie Dew (Page 31) 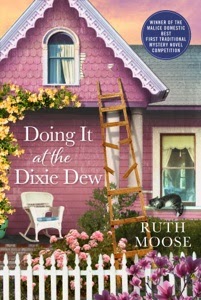 I’d heard your manuscript was twenty years old. Why did you wait until last year to submit it to the Minotaur contest?

Actually the manuscript was entitled Murder on Main Street, and I entered it in the first Malice competition in 1990. It was a finalist. I got letters from that fabulous editor Ruth Cavin asking for revisions but at the time I was in graduate school, working full time as a reference librarian and my father-in-law, after a heart attack and on a salt free diet, came to live with us. I simply had NO time. Even for several years I had no time, though I did tinker with it on and off. Nothing I felt worth showing to Ruth Cavin, and as I said in my acknowledgements, my writers group pretty much gave it thumbs down, to put it mildly.

Even though you taught at UNC Chapel Hill, was winning the contest validation of your novel writing?

I am still a short story writer at heart. Always will be my first love. Poetry next. I’ve published three collections of short stories with individual stories in Redbook, McCalls, Good Housekeeping and other women’s magazines when they ran fiction. I’ve also published in Atlantic Monthly, Alaska Quarterly Review, North American Review, and so on. I taught Introduction to Writing Short Fiction at UNC for fifteen years. Loved every minute of it. Loved my students so much I neglected my own work. For three months each summer I either went to conferences (Oxford/Jane Austen, etc.) or wrote short stories and poetry. Dixie Dew was originally written on a Kaypro Word Processor, converted to a Dell, and then three years ago, thanks to a great computer guru, converted to a Mac. Each conversion, I revised. Example: the original manuscript was written in third person. Final draft went to first person. I guess I’m just a slow reviser. AND…. when I joined Sisters in Crime, I’d go to meetings, have to introduce myself as a writer of short stories and poetry. Finally thought to pull out that manuscript, revise and enter Malice Domestic. Luckily, I was assigned to a terrific editor, Toni Kirkpatrick, and she really put my feet to the fire in revision.

Would you give our readers a short synopsis of your book?

Dixie Dew is a bed and breakfast in the mythical town of Littleboro, North Carolina. Beth McKenzie Henry comes “home” to find this shambling family homestead, all she has, and it’s either try to sell it for pennies, or turn it into a business. She hires and fires contractors, borrows to the hilt. The whole town thinks she’ll fall on her face especially when her first guest is found dead in bed. In a locked room! Beth has to solve the murder and has some attempts on her life. Littleboro has lots of Southern characters including Crazy Reba, their resident street person.  Beth’s best friend, Malinda is a pharmacist and UNC grad, one of the first women to get the coveted Morehead Scholarship.

Your main character, Beth McKenzie is a likeable character. She’s having a hard time on many levels. Beth needs to believe in her past and Littleboro’s past. She’s reticent to accept change. Is she sentimental or stubborn?

How about both? She’s from good ole Scottish blood, like me. Buies is actually my family name, and the story’s grandmother, Margaret Alice, was actually my grandmother’s name.

Beth knew of Scott, knew he had been married, but there is no mention that Scott is divorced. Is he still married?

Although Beth doesn’t seem to readily accept change, she has no problem accepting her friend Malinda, a black single-mother, who is also a pharmacist. Why is Beth’s reaction to Malinda different?

She had been in high school with Malinda. Beth doesn’t like change that destroys the landscape and character of Littleboro. Malinda is change for the better. Plus how could anyone NOT like Malinda? She’s smart, sassy and super confident. I want her for a best friend.

Is money the root of all evil?

Only the LOVE of money is evil. I think having some real money might be fun.

Your secondary characters are memorable from Crazy Reba to Ida Plum. Do you have fun writing secondary characters? You make Beth and readers suspicious of Ida Plum, which I felt might have been a bit mean given all she does to help Beth. Were these suspicions just?

Good point. Ida Plum is such a perfect foil for Beth. And represents the balance Beth needs,
that her grandmother once gave her. Ida Plum is not forthcoming about herself very much and Beth really doesn’t know her that well. Remember Beth has been gone from Littleboro except holidays when she visited her grandmother.

Why would Verna allow Miss Tempie to control her?

It’s in the text. Tempie has threatened to have Rolfe kill Robert Redford, Verna’s rabbit.

I fear we share a dubious characteristic—frankness—demonstrated in your book’s acknowledgements. Does age make one bolder?

Ah, yes, yes. And I’ve always hated those sticky sweet acknowledgements, wanted to squeeze some vinegar on them.

There are a few loose ends at the end of Doing It at the Dixie Dew. What’s next for Beth? Will readers find a few of those danglers knotted?

The sequel moves the tale farther and deeper.

Doing It at the Dixie Dew was released last month. Here are reviews of the book. A belated congratulations, Ruth!

“Moose’s delightful first cozy, winner of the Malice Domestic Competition for Best First Traditional Mystery Novel, stars Beth McKenzie, who returns to her hometown of Littleboro, N.C., to open the Dixie Dew Bed and Breakfast…Little old ladies in gloves and hats, financial shenanigans, a large rabbit, and the fishbowl life of a small town add to the fun.” —Publishers Weekly

“Quirky characters, the beginnings of a romance, and the southern setting add to a story that will appeal to fans of Mary Daheim’s Bed-and-Breakfast mysteries and Sarah Graves’ Home Repair Is Homicide series.” —Booklist
Posted by E. B. Davis at 12:00 AM

I lived in a small town in North carolina for about five years. The place was full of wonderful characters. Good luck and thanks for sharing.

A book with a rabbit named Robert Redford sounds like pure fun! Glad that you now have more time to write. Best wishes with your books and short stories.

These sound like great reads. Clever titles, too. Will add them to my list for summer reading.

Welcome to WWK, Ruth. It was nice to meet you at Malice. Best wishes with your writing.

welcome to WWK, Ruth. I just received your book in the mail from Mystery Book Club a few days ago and now that I finally finished a really long book for one of my book clubs that's meeting at my house tomorrow, I'm going to start it. It's been driving me crazy because I wanted to start it right away after reading an interview with you on Judy Hogan's blog.