“But think of it as a puzzle instead of how real crimes are committed.”
Marilyn Levinson
Murder a la Christie
(Kindle 2161)

Two months ago, Marilyn Levinson wrote a Salad Bowl Saturday blog for WWK in which she asked the question, “Why is this book different than my other books?” I’m so glad she asked the question because many authors can’t see their own writing, including a certain WWKer who writes a lot of author interviews! Murder a la Christie, released in February by Oak Tree Press, is different. I’ve read most of Marilyn’s books and enjoyed each one. Murder a la Christie is a page-turner I devoured in a day. I think you’ll love it, too. Please welcome Marilyn back to WWK.                       E. B. Davis 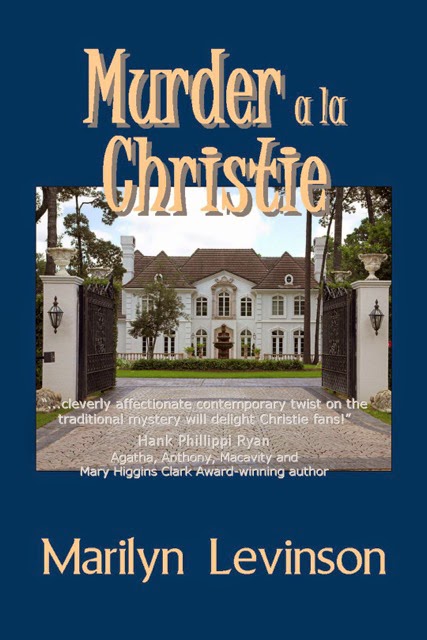 You’ve written YA, supernatural, and cozy mysteries, Marilyn. Although your main character, Lexie, is an amateur sleuth, she is also an expert in mystery literature so she’s more a super-sleuth. What mystery category would you place Murder a la Christie?

I consider Murder a la Christie a traditional mystery with cozy elements. But as you know, Elaine, we don’t always get to categorize our books. It’s also been labeled a cozy, which is fine, too.

How did you know where to start this book (which wasn’t really at the beginning)?

I had a critique partner who told me on more than one occasion where to start Chapter One. I’d be reading my opening chapter aloud to the group during a critique session, and  she would stop me to say, “This is where you begin.” At first I felt inept  because I couldn’t find the opening lines myself. Then another writer pointed out that I’d written all that happened before for my own sake. It’s how I, the author, get to know my characters and setting and get a feel for the story.

I characterize Hercule Poirot as basing his reasoning on the most obscure details and Miss Marple as having a negative mind who thinks the worst of everyone. Although I like Christie’s plots and
settings, I’m not a fan of her sleuths. Will you defend them?

Like Dame Agatha, I’m fonder of Jane Marple than I am of Hercule Poirot. I love the idea that a little old spinster is aware of the dark side of every human being, and therefore capable of murder. We don’t always get to see how Poirot and Miss Marple come to their conclusions when it comes to identifying the murderer. I think both sleuths are important when you consider the history of the mystery novel.

When Lexie gets an inheritance, she takes $300 as mad money and spends it. She could have blown it on clothes, but Lexie spends it on books, food, and wine. Would that be your choice also?

I had a very definite town in mind when I created Old Cadfield--the economic level, the beautiful homes, and the actual location on Long Island. That said, I created the “downtown” Main Street area to suit me and the novel.

In many ways, your Long Island wealthy enclave is very much like the little cloistered English villages where Christie set her novels. Is there a corollary or am I making it up?

I’m glad you see the corollary. <g> My intention was to draw parallels between my book and the Christie novels set in small English villages. In both the characters know one another, yet everyone has secrets. There are differences, too. I love to delve into the psychological aspects of my characters and their relationships with one another. Also, romance rears its head in Murder a la Christie.

What is your favorite Christie mystery?

Hmmm, I like so many of them. I like The Murder of Roger Ackroyd because it’s unique; Mystery on the Orient Express because it fulfills a sense of justice; and The A. B. C. Murders because, though the murders are complex, Poirot is able to find the murderer by using good common sense. 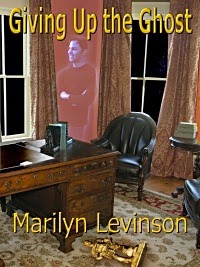 Lexie, an outsider, sees the people involved in the murders more realistically than her best friend, a long-term resident of Old Cadfield, who has an emotional investment in the community, and yet, Lexie’s detachment doesn’t solve the case. Her analysis can’t be complete without more knowledge of the people involved. How do experts, who must get involved with the suspects, have the ability to make sound judgments?

I think the experts know how to question suspects. They question them again and again. Also, the authorities have so much more technical know-how today: DNA, testing fabrics, for bloodstains, knowing what weapon was used to commit a murder.

Like Poirot, Lexie pays attention to details. Like Miss Marple, Lexie makes character judgments. But isn’t it Lexie’s ability to view facts through others’ perspectives that enables her to solve the case, unlike either of Christie’s sleuths?

Lexie learns about the Old Cadfield residents through other people and by interacting with them herself. She has to decide what information she acquires is relevant to the murders.

Do wealth and immorality go hand in hand?

I think wealth can give some people a sense of entitlement. They’re used to being in charge of situations, used to certain privileges, and often used to getting things their own way. 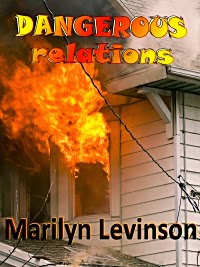 I’ll ask you the same question Lexie poses to her Golden Age of Mystery book club: “Do we have the right to kill someone who’s committed a heinous crime and has managed to evade the system?” (Kindle 2155)

I don’t know if we have the right, but reading  Murder on the Orient Express gave me a sense of satisfaction.

You set the story during the summer. Why?

Lexie is a college professor. I wanted her to have the summer free to devote herself to solving the murders and to immerse herself in Old Cadfield society.

We all hope that Murder a la Christie is the first of a series. Is it, and if so, what’s next for Lexie?

Next is Murder the Tey Way. Lexie is now living in a middle-class neighborhood. Her estranged sister has arrived rather unexpectedly, escaping from a bad situation. When a dead man is found in Lexie’s backyard, Lexie’s afraid that her sister killed him.

After writing that blog for WWK, have you come up with any answers, Marilyn?

A few. Some readers have told me this is their favorite book of mine. I think they like Lexie, they enjoy the wealthy milieu of Old Cadfield, and like reading the discussions about some Christie novels. Many people have told me they couldn’t guess the murderer throughout the novel, which is good to know. I hope I continue to do things right when it comes to writing my mysteries. <g>

I looked on Amazon and found nineteen reviews of this book. Most gave the book a five star rating. None were lower than four. Read it for yourself. I think you’ll agree with the majority of readers. Murder a la Christie is a treat.
Posted by E. B. Davis at 12:00 AM

I enjoyed meeting you at Malice, Marilyn. Was your book out in the print version then? I know it was on my list to get, but for some reason I didn't come home with it. It sounds like a book I'd really enjoy.

Thanks for a fascinating interview! I grew up sneaking my Aunt Mary's Agatha Christie novels to read (she wasn't quite sure they were suitable for a child) and came to love them.

What a neat idea for a series!

Elaine,
Thanks for having me here. It was a pleasure being interviewed by you.

Gloria, I did have copies of the book at Malice. It's still available on Amazon in both forms.

Murder ala Christie is next on my Kindle. It sounds like a terrific read. Marilyn, you were one of the people I looked forward to meeting at Malice, and I'm so glad I did.

What a fascinating plot and interview! Thanks to both of you!

KM and Warren,
Thanks for your kind words. I thought a Golden Age of Mystery book club series should start off with the Queen of Mystery. Amazing how popular Agatha Christie still is.

Polly,
I felt the same way about meeting you at Malice. I'm glad we met in person.And I'm glad Murder a la Christie is next on your "to read" list.

Polly,
I felt the same way about meeting you at Malice. I'm glad we met in person.And I'm glad Murder a la Christie is next on your "to read" list.

What a clever idea for a series! I look forward to reading Murder a la Christie.

I'm looking forward to reading the next in series--because I want to follow the main character's development. She seems like a snappy, smart woman, but she's got a few man-issues! But please continue the Giving Up the Ghost series, Marilyn. She was also a terrific character. I could see the ghost and her developing a partnership. Thanks for the interview.

Susan,
Glad you enjoy the interview.

Kara,
I'd be delighted if you read Murder a la Christie. And feel free to write a review.

Great interview! I have two comments. First of all, I absolutely loved "Murder a la Christie."
And, secondly, Happy Birthday, Marilyn!!! I hope you have a wonderful day!

Elaine,
In between doing the edits for Murder in the Air--a new edition is coming out this month with Untreed Reads--I've been going over the sequel to Murder a la Christie. And I've been thinking about a sequel to Giving Up the Ghost. Cam's too much fun to let him go to his final resting place.

Patricia,
Thanks for your kind birthday wishes. How does one get so old?
And I'm delighted that you loved Murder a la Christie. My goal is to entertain my readers. It's especially rewarding when a friend and fellow mystery writer loves what we've written.

Very interesting! I love the idea of a Golden Age of Mystery book club--I want to join!

I adore that your series is set on Long Island - a place I call home. From one fellow LIer to another, I wish you the best of luck.

I have read Murder a la Christie and enjoyed it thoroughly. Now I'm anxiously awaiting Murder the Tey way

Hi Marilyn - We met at Malice Go Round. I adore the concept for your series. I can't wait to check out Murder a la Christie and Murder the Tey Way. The writers of the Golden Age still intrigue.
Hope you are celebrating your birthday in style!

Excellent interview, Marilyn. I really want to read this book but I haven't had a chance yet. I'm looking forward to it.
Marja McGraw

Marja,
Thanks for stopping by. You'll get to this book when you get to it. No rush.

Sarah, Terri my fellow Long Islander, Pat, and Shari--yes, I remember sitting next to you at Malice Go Round!
Thanks for stopping by. I agree, Shari--the Golden Age of Mystery authors still intrigue us mystery readers and writers.

A very interesting interview! I love novels that reflect Agatha Christie and the Golden Age of Mystery as well. Congrats on the new novel. Wishing you many sales!

Jacqueline,
Thanks for stopping by and for your good wishes.