Kristi Belcamino: Blessed are the Dead 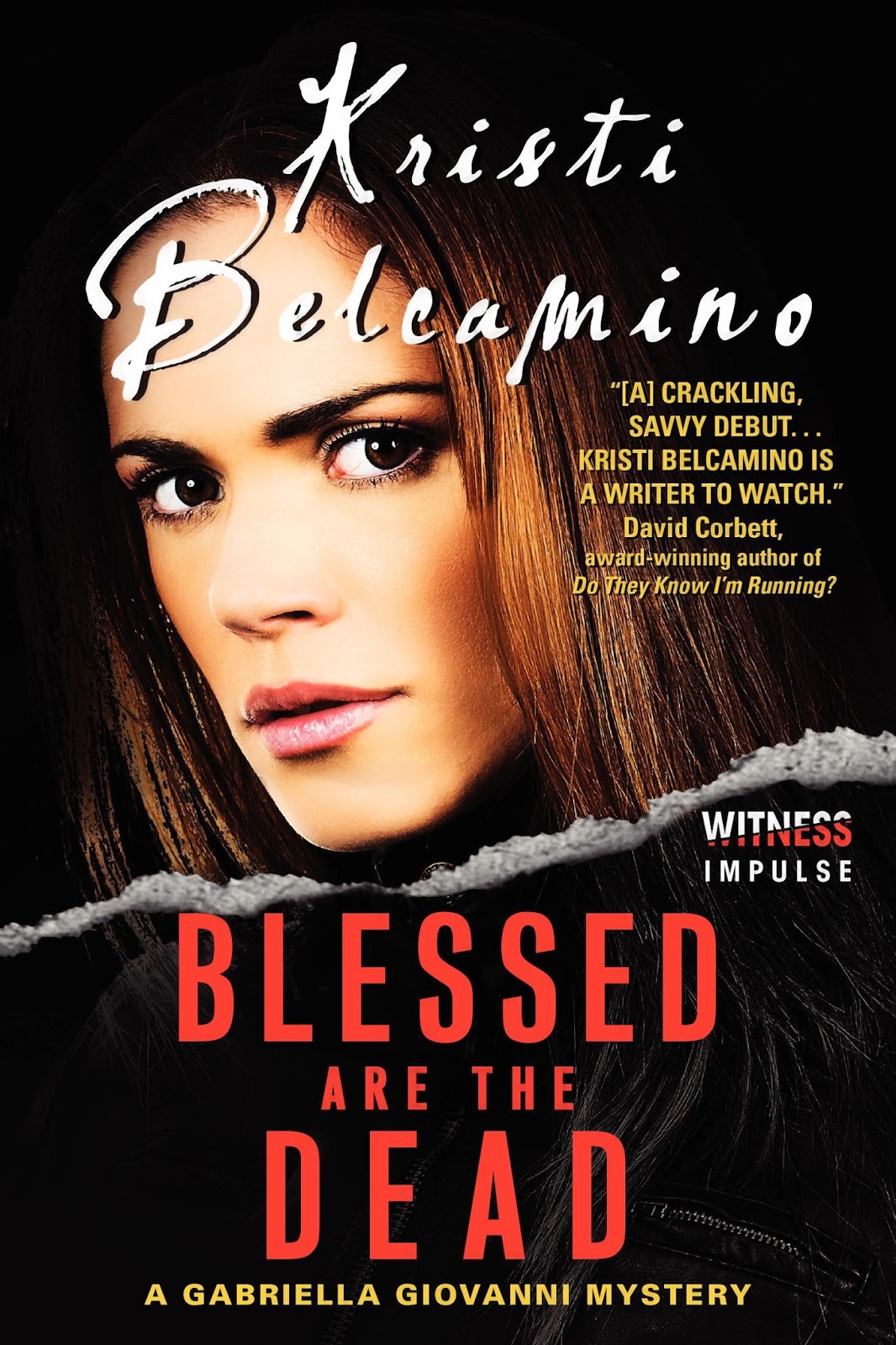 So, Tuesday, June 10, is a HUGE day in the world of Sarah. Mostly because not only do I know several authors with books coming out that day, but my very first critique partner is one of the awesome writers hitting the shelves.

I’ve been lucky enough to know Kristi Belcamino for a few years now. We became friends after her eagle eye noticed a manuscript of mine featuring a reporter protagonist in a list of Sisters In Crime writers seeking potential critique partners. After a few tentative emails discussing our backgrounds (both at large coastal newspapers) and expectations, we swapped manuscripts.

Kristi ended up with a manuscript of mine that not even my agent has seen (sorry, Rachel) because it’s stuck in a drawer, but I was lucky enough to get a very early version of the book hitting shelves Tuesday, Blessed are the Dead.

Of course, BAD, as we call it, has changed a lot in that time—as all books tend to do. It’s gone through numerous revisions, edits and changes, but what remains is Kristi’s clear-eyed view on what really happens when a journalist really, really goes after something. In this case: a kidnapper and admitted serial killer.

It’s a harrowing tale of passion and the hunt for truth, all the while staring down a monster only human biologically.

Yes. And it’s a good thing you won’t be able to put it down because the sequel, Blessed are the Meek, comes out July 29.

Now, despite that fact that she’s caught in a whirlwind of getting ready for her BAD book launch, Kristi was kind enough to answer a few questions for me and the WWK. Because she’s a pro.

1. Describe your writing routine and/or schedule?
I’m lucky that I have my weekday mornings free so I write from 9 a.m. to noon every day. I either sit at my kitchen counter or if I’m feeling really fancy, I head to a local coffee shop and write there, powered by a latte.

2. What do you do if you get writer’s block?
As a journalist, I don’t believe in writer’s block. An editor screaming in your ear combined with the fear of losing your job effectively eliminates writer’s block for life.

3. Who do you read, or recommend other writer’s read, in regards to craft?
I believe that my first book, Blessed are the Dead, only sold after I revised it so that it fit into a three-act structure. There was a lot of interest in it beforehand, but as soon as I made sure I was hitting those crucial plot points, it sold in a two-book deal.
With that said, I recommend two books on plotting and story structure: Story Engineering by Larry Brooks and Plot & Structure by James Scott Bell.
For sheer inspiration and guidance on the writing life, I adore Making a Literary Life by Carolyn See and The Art of War for Writers by James Scott Bell. (Pretty much any book by James Scott Bell is a good bet!)

5. When did you first know you wanted to be a writer? Tell us about it.
It’s such a boring, stereotypical story: I tried to write my first book in fourth grade and realized it sucked so I studied journalism instead. Then, nearly forty years later, (when I was old enough not to give a rip anymore) I got the guts to try my hand at fiction again.

6. What advice would you give an aspiring writer?
Read and write. Do both as much as humanly possible.

7. What do you think is the most important skill to have to succeed as a writer?
It’s not talent. It’s perseverance.

8. What is your favorite food and/or drink?
Cheese. Vodka.

9. Do you have a favorite book or movie?
The Outsiders for both! I love S.E. Hinton. Every time she responds to one of my tweets I just about lose my mind. I’m counting the days until my two daughters are old enough to read her books and watch the movie!

10. Is there anything I didn’t ask you that you’d like to share?
I just want to thank Sarah for thinking of me. She’s a terrific writer and has been a big supporter and friend to me from day one. I can’t wait to be the one interviewing you!
Posted by Sarah Henning at 12:00 AM

Best of luck on both your debut and your quick-to-follow second. What’s next? (Someone always asks that, don’t they?)

Thanks for reading and asking!
Right now, I'm gearing up to write book three in the Gabriella Giovanni mystery series! I love just starting a new book -- that feeling of infatuation as I'm immersed in that world once again!

Thanks, Warren!
Agreed. Butt in Chair!

Thanks for the recommendations, Kristi, I'll have to look for those books. Good luck with your launch. I'm thankful that Sarah brought you to our attention. I'll look up your books because I'm heading for the beach (I'm always heading to the beach) at the end of the month. Thrillers read so much better under the warmth of the sun, drink in hand, while watching dolphins troll the waves!

Kristi, this is an exciting time for you. Best of luck on selling many, many books, and I agree that starting a new book is always something I look forward to, also.

Thanks for stopping by, Kristi! BAD sounds great - and that is a wonderful blurb from David Corbett. Sounds like a great read.

Thanks for sharing your experiences, and best of luck (although I know there's very little luck involved) with your new release and the following books!

Yes, everyone read this boo, it's amazing! (Not that I'm biased or anything!)

E.B. I want to be reading where you are! That sounds lovely!
Gloria, thanks! I'm trying to remember to enjoy it and not stress!
Shari, thank you! David Corbett has been a huge support in my writing journey and I'm very lucky that way!
KM, thank you! I think it's butt in chair and sometimes a little luck thrown in!
Sarah, xoxo