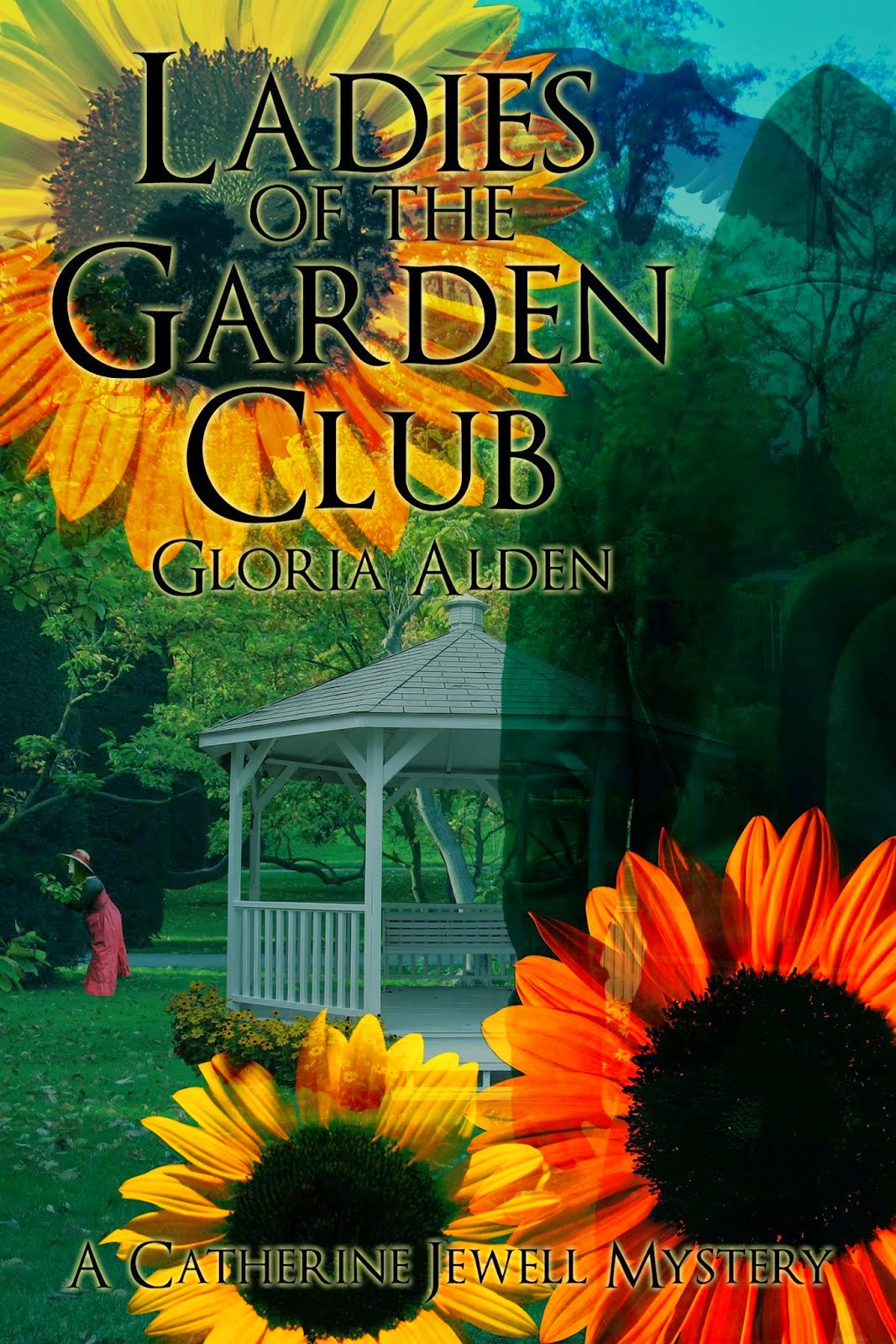 Small town Portage Falls is the idyllic place for an event on the town Green, but when an elderly member of the garden club shows up dead in Catherine Jewell's greenhouse, she falls under suspicion since she's an authority on poisonous plants. As more tragedies plague members of the garden club, Catherine and others begin to suspect that somebody has it in for them.
(http://www.smashwords.com/profile/view/GloriaAAlden)

One aspect of your series that differentiates it from others, Gloria, is the realism. Few authors create secondary characters that are memorable. Did teaching in a community enable you to see a cross-section of society?

That might have helped, but probably it’s more likely because I’m older than many writers and I’ve always been curious about people. I get that from my father. When my family; husband, children, parents, and assorted younger siblings still living at home, would go on camping vacations each summer, my father would disappear from the campsite for some time, or sit on a bench outside shops while the rest of us were inside shopping and later he’d tell us interesting stories about people he met. He was a good listener and people would respond by telling him about their life.

One of those memorable characters, new to this book, is Polly Popcorn. How did you create her?

Now that character did come from my teaching career. Lorna wasn’t a kindergarten teacher, but a speech teacher working with children with speech problems. She became a friend of mine because we both had an interest in plants, gardening and folk music. The difference is she was happily married and didn’t play any musical instruments, nor was she the real squirrel lady, who lived around the corner from the school where I taught. I never met the squirrel lady until this past fall when she was introduced to me at the Village Bookstore by the owner, Ellen Eckhouse.

Again, I look to reality. As a gardener, did you already have an extensive knowledge of poisonous plants, or did you research the subject?

I had some knowledge, of course, but I did further research. Some of my friends laugh about the books on poisonous plants I have on my book shelf with other books on writing about crime and mystery. Mostly I used them to get the symptoms of certain poisonous plants and the time involved between ingestion and death.

Another aspect that differentiates your series from others is the timing. Most mystery series have gaps. Subsequent books are set a few months or in the next season from the last book so the reader assumes life continues. But your books are timed so that one ends and the next one begins almost immediately. Why did you choose that timing?

Partly it’s because of the gardening theme. I live in NE Ohio which limits to some extent that theme, especially as Elmwood Gardens won’t have much going on in the colder times of the year although they do have a large conservatory. Of course, now that it has started, I’m still going to go month by month and I have the basic plot already figured out for the coming months although it won’t have much to do with gardening in the colder months.

It’s clear from your depiction of characters that everyone struggles. Being jealous of anyone seems a 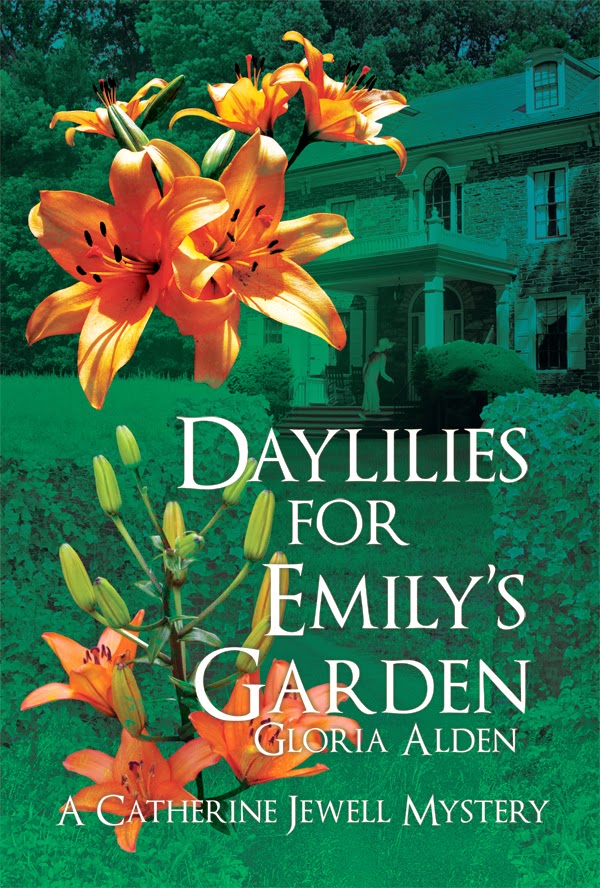 ridiculous notion. Do you agree?

Yes, I do, but I know a lot of people do feel jealous or envious of others and sometimes it takes over their life.  Any jealousy or envy I might have felt over the years was quite minor and never lasted. I think it probably has a lot to do with my childhood. I was the oldest of what would turn out to be six siblings – the sixth was a surprise after I was already married – and yes, my brother closest in age and I squabbled at times because he was a tease, but there wasn’t any jealousy between us. All my siblings have a good relationship with each other and get together regularly for sibling nights. Also, it’s perspective. On Christmas, for instance, we each got maybe five gifts, and then we’d go across the road to my cousins’ house where their living room was filled with toys. Next we’d visit the neighbors’ two doors down, and they might have received one gift like a comb and brush set or a new pair of shoes.

Catherine is attracted to a girl, T. J., who is the age Catherine’s daughter would have been had she lived. Sometimes extreme events serve to clarify priorities, such as in the case of T. J.’s parents. Does the truth set you free?

I think it does for some people, but not for others. There are people who can’t seem to let go of past pains or slights. People are such a mixture, aren’t they? T.J. is actually based on one of my former students. She was one of my brilliant students, quite gifted and very opinionated. Because I accepted her differences, we got along quite well and she delighted me. She was one of my unforgettables out of the many, many third graders I taught.

Absolutely there is. I have had so many things happen that are coincidences. For instance, recently I was browsing through my extensive collection of CD’s and noticed one with red on the edge. It wasn’t the one I was looking for, but I pulled it out. It was a CD I hadn’t listened to in years of Yo-Yo Ma and Bobby McFerrin. I set it aside to listen to another day. The next morning my clock radio came on with Kristen Tippet’s program On Being and she was interviewing Bobby McFerrin that morning. Those kinds of things happen too often not to believe in it.

To me, extremism is logic run amuck with emotional garbage thrown in for stench. Do you agree?

Good heavens, yes! One only has to follow the news to know how true that is. The recent death of that wacko preacher recently is a case in point along with all the violence in the Mideast and other places by extremists. I don’t know if I’ll ever include that in my books because that kind of irrational hatred is scary to me. What seems especially incongruous is much of this is done in the name of some religion which is totally counter to the real meaning of any religion.

Did you base your extreme victim on any real person?

No. My victims and my murderers are created in my mind. I try not to create a victim that will cause a reader to feel saddened much over their death. I hate to read about victims I’ve grown to care about being murdered, and I assume most other readers do, too. I always feel a little more saddened by my murderers than my victims, to tell the truth.

Giving is a basis of civility. Has our society lost sight of that?

One would think that from the news, certainly, but I don’t believe it. I know too many people who are generous with their time and their money even if it’s limited. I’m saddened by the big gap between the rich and the poor that we have now. I think something needs to be done to change that. When I hear there are food banks for workers at Walmart stores when the owners have more money than they can possibly ever use, I get angry. That’s one of the things I could rant about. There are too many people in our country who can barely make ends meet, while the extreme rich continue to hoard their money and don’t share their excessive wealth. Several years ago, my income tax woman told me I give more in charitable giving than her wealthier clients who could afford to give more than I do. I think that’s sad.

Remind our audience, who creates your wonderful cover art?

She’s my step-daughter, Kristen Fritch, who is a graphic artist. I love her work and I get a lot of positive comments on the covers. We work together on them – from a distance since she lives in another state. I tell her what I’d like and she comes up with what she thinks I want. I tell her what’s working for me and what’s not and then she puts together something I’m quite happy with.

Which would you prefer, Gloria, strawberry pie or pasta primavera?

You know better than to ask me about mountains and beach. I often eat pasta and not so much desserts, but I love strawberries so it would be strawberry pie. 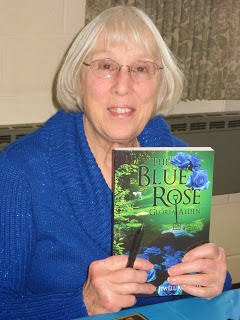 Thanks, Jim. I figure if Cabot Cove in the Murder She Wrote series can remain popular, I can do the same thing. I know I have a lot of people eager for my next book which I'm working on now.

I've read Gloria's books, and I thoroughly recommend them. She brings a keen insight into people (and an extensive knowledge of gardening) to her books, so I find them very realistic. It's easy to lose yourself in Gloria's world.

I'm looking forward to the next one!

Thanks for the interview.


Thanks for blogging with us on WWK. Kudos on your realistic writing.

Nice interview, Gloria. And your covers really are beautiful.

Thank you, KM and Warren. I'm working on the fourth now. Pat, I agree that I lucked out with such a talented granddaughter. I think the covers help sell my books.

Excellent interview! Everything looks great, Gloria! Can I toast you with strawberry pie?

Excellent interview! Everything looks great, Gloria! Can I toast you with strawberry pie?

Congratulations on your latest Catherine Jewell mystery, Gloria! I always enjoy reading about Portage Falls and the people who live there.

Yes, Sarah, you can toast me with strawberry pie if you send me a piece, too. My strawberries are just ripening now, but I'm not getting enough for a pie.

Kara, actually this book came out right before Christmas and too late to do any promoting. Right now I'm working on THE BODY IN THE GOLDENROD which will be about a Civil War Reenactment at Elmwood Gardens in September.

I'm a bit late today, Gloria, but I wanted to stop by. Kudos on all the writing you do - you don't seem to be bothered by writer's block. Can't wait to see your next book.
And I'll join you and Sarah with that strawberry pie ;)

Thank you, Shari. No, writers block isn't a problem as much as all the other things that get in the way of my writing, like all the activities I'm involved with and phone calls from family, friends or robo calls, etc. Also, I have a very big problem with saying no, not to telephone solicitations, but to people I like asking me to do something with or for them.

Gloria, please forgive me as I ate strawberry cheesecake while reading your interview. I'll remember to get a piece for us to share the next time we're together. Congratulations on your excellent series that features beautiful covers and contents!

I enjoyed reading Gloria's books, from the fine covers to the last page. Her secondary characters are memorable. I don't forget them in between books. Keep them coming, Gloria. You're doing a great marketing job as well.

Thank you, Paula. My strawberries are ripening, and I've been picking them to make strawberry shortcakes - my favorite strawberry dessert made with Bisquick and not those things you buy in the store.

E.B. your words make me feel better than even selling books. What little money I get is nice, but never as much as having readers who enjoy my books and like my characters.