My step-daughter recently told me that she felt guilty for making up stories about people that she sees on the street.  Her actual words were, "I know it's wrong, but I like to see sad people, because I make up stories about them."

She's twelve, and a very sweet, intelligent girl, so I knew she wasn't meaning that she likes people to be sad, but that she enjoys the act of making up the “why” they’re sad.  She has participated in the last three NaNoWriMo events for kids, so I wasn't surprised to hear she did this.  But when she expressed her concern that she should feel bad about that, I quickly assured her that doing so is part and parcel of being a writer.

I told her that knowing a character’s back story is crucial to being a successful author.  We need to know our characters inside and out in order for them to jump off the page, like they were actually made of flesh and blood.  I even assured her that I do it myself all the time, and cited some examples.

I understand her guilt, though.  There are so many societal rules that would make an activity like that seem cruel and mean: 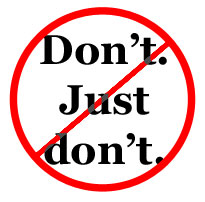 Don't lie/make up stories - This one is the biggest one to overcome, especially for a child.  "Don't Lie" was ingrained in my head so much growing up that, if I tell even a white lie in my adulthood, I ruminate about it for days, wondering why I told the lie in the first place and scolding myself for doing so.

Don’t stare at people – I’m not sure why this one is such a taboo, or where in our adolescence it becomes so.  If you watch toddlers, they’re staring at people all the time.  They take in the new person/people in their field of view, and are fascinated.  So, why isn’t that “allowed” as we get older?  Is it because the other people are afraid we’re judging them?  If I wear a sign that says “I’m not judging.  I’m a writer and want to absorb your nuances,” would I be allowed to stare?  Probably not.  I’d probably get sued by people who didn’t want me “absorbing” their “nuances.”

Don’t steal another’s likeness – We writers have to be so careful about describing people in our books, for fear that a girlfriend would get angry with us for writing about her propensity to date loser men, or that we described another friend’s baldness in such a way as to make him appear to be one of the said “losers.”  That’s why you’ll hear so many authors say their characters are an “amalgamation” of people they’ve met over time, in any interview that asks that question.  The hard part is, there’s probably at least one person out there who embodies even the characters that we truly make up out of thin air.

I’m sure there are other “rules” that we break, as writers, but I can’t think of them right now.  It might be taboo to break them, but doing so helps us be good at what we do . . . so long as we make sure we're rebelling in our fictional worlds only.
Posted by Alyx Morgan at 12:00 AM

In mystery writing, I think that writers must balance imagination to realism. In the subgenres, such as paranormal mystery, the imagination can run wild, yet as far as the mystery is concerned, it must be steeped in reality or else it loses credibility. So, there are rules that must be followed, such as how the police would treat a given situation, but conventions can be broken in other aspects of the investigation, characters and situations. Maintaining that balance it a hard task for mystery writers.

We don't always consciously think of people we know or meet as characters, but sometimes they seem perfect for a character we want. I've used my brother and my ex-mother-in-law and to a certain extent the grandmother I wrote about a few weeks ago. In each case, it was as much their looks as certain aspects of who they were.

You're right about children having a hard time lying, but not always. I've had some very sneaky kids in my classroom. One of the hardest assignments I gave them was to write a thank-you letter to an imaginary aunt or grandmother for a totally inappropriate gift they'd received for Christmas - a pink sweater for a boy, a too small ugly dress for a girl, a baby toy, etc. They were to be polite and tell said aunt or grandmother they liked it and at least one reason why they did. Their answers so funny as they tried to follow the assignment without lying. "Thank you for the sweater. Pink is not my favorite color, but I like it anyway."

It definitely can be a hard task, EB. But it can also be fun to push those boundaries.

LOL That would've been a fun assignment, Gloria. And yes, kids aren't always honest, but I personally feel that has something to do with what they're taught. If a child is told to thank someone for a gift they hate, they don't know how to do that diplomatically.

"Thank you for the gift, Auntie X...what a pretty shade of pink." would be a way to thank the person without their feelings being hurt by my never wearing the sweater. But it's taken me decades to learn how to do that.

One of the functions of writers is to break societal "taboos" and talk about people and aspects of society polite people ignore. Poverty, various forms of abuse, prejudice, a flawed justice system and so forth. As mystery writers we can deal with serious issues without ranting or in-your-face confrontation.

Good post, Alyx! I'm sorry I'm late joining in, but I had to appear on television this morning. And a 3-minute segment swallowed the entire morning.

Warren, I think you've nailed the real strength of crime fiction. We pull the covers and camouflage off transgressive behavior and parts od society our culture would rathr not acknowledge. I remember Dennis Lehane talking about why he left literary fiction for crime fiction. He said he saw this huge tide of meth addiction destroying whole communities across the entire country, and no one was writing about that in literary fiction--or about any of the other problems of rural and urban poverty, a broken immigration system, a broken judicial system, etc.

Very good points, Warren. There are certainly some authors who feel it's their duty to bring things out in the open that others would rather sweep under the rug.

There are a lot of taboos, but part of the fun of writing fiction is knowing that's exactly what it is--fiction--where nobody really gets hurt.