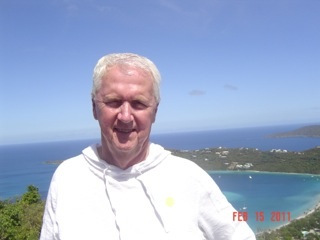 I’ve interviewed Casey Dorman as a publisher before, this time I have the pleasure of interviewing him as an author.

Casey, welcome back to Writers Who Kill.  Please remind our readers long have you been writing books, what have you written and where can readers find your work?

I’ve been writing fiction since 1994. My first novel, The Experiment, was published as an ebook and as a print on demand paperback, but it is no longer available. I had a second ebook, California Gothic published by the same publisher and it was a finalist for an “Eppie” award as best suspense novel in ebook format, but it is also no longer available. My next novel, Pink Carnation was a print on demand paperback and I followed that book with I, Carlos, the first Nyles Monahan novel, which was published as a hardbound book. Following those books, published by other publishers, I self-published two ebooks, The Prisoner’s Dilemma and Where Have All the Young  Men Gone?, which were put on Kindle and Nook. Most recently I have self-published through my own publishing company, Avignon Press, a paperback titled Unquity and my newest, a paperback titled Chasing Tales. I also edit and publish the quarterly literary review, Lost Coast Review which is available in paperback and online. All of my books except The Experiment  and California Gothic are available on Amazon.com or Barnes and Noble.com and several are available as both Kindle and Nook books as well. Unquity, Chasing Tales and I, Carlos , as well as current and past copies of Lost Coast Review are available at discounted prices by going to www.avignonpress.com

What was it like to bring back Nyles Monahan after his first indelible appearance in I, Carlos?

I liked Nyles Monahan, partly because he is near my own age and he is unusual for a cop character in a novel, being highly introspective.  Most readers of I, Carlos enjoyed Nyles so I decided to write another novel with him as the main character. I didn’t have an easy hook for the novel, the way I did with I, Carlos, so I decided to have some fun and set the novel in Boston, where I used to live and the Dorchester area of the city, where I used to visit my favorite Irish pub. I actually wrote the book several years ago, but until I started Avignon Press, I didn’t have a venue in which to publish it. Chasing Tales was never sent to other publishers as I was waiting for I, Carlos to become a film and generate a demand for a sequel. I gave up waiting.

Can you tell us about his latest adventure?

Nyles’ best friend in I, Carlos is “Father Tom” O’Flannery. He and Nyles are both originally from Boston although they live in LA. Father Tom gets called back to Boston by the Church because of allegations that he molested an altar boy when he began his priesthood in Dorchester thirty years earlier. He asks Nyles, who is retired from the LAPD to do some private investigating to help clear his name. When Nyles arrives in Boston two things have happened: the witness against Father Tom has been murdered and Father Tom is charged with the murder and Nyle’s grand-niece may be being molested by her stepfather.  Nyles is asked to help with both situations. While Nyles intervenes with his brother’s family to make sure that his grand-niece is safe, he tracks down other former altar boys to find out if any of them remember a priest who abused children at Father Tom’s old church. One of the former altar boys and another former friend of Nyles, the nun who is the assistant to the Monsignor handling the Church investigation, are murdered. Nyles suspects the Monsignor himself, since some of the former altar boys remember a priest by the same name who molested children. The Monsignor commits suicide and leaves an enigmatic suicide note, which may or may not indicate that he was the molester and killer. When it turns out he isn’t, Nyles keeps investigating until he finds the real killer. In the final chapters, the killer is identified, but he kidnaps Nyles’ grand-niece and Nyles must find him and save her.

Do you think he’ll make a third appearance?

I’m debating that. I have a plot, which I’m researching right now and I’d like to use a character I’ve already developed in the story, but I’m still weighing whether to use Nyles Monahan or Phineas Routledge, the main character from Pink Carnation.

Do you have an intention to bring back Phin and Kim in Pink Carnation? They remind me of Nick and Nora in the Thin Man series and for some time I have been wondering what they were up to.

I actually wrote another novel with Phineas and Kim in it, called Death in the Wetlands. That was many years ago, but I’ve still got the novel. It has some problems in the way it begins that sets up the story and I have never been able to fix it to my satisfaction. I doubt if I’ll do anything with it, but as I said above, I’m debating whether to use Phineas and his wife, Kim in the story I’m putting together right now.

I understand that one of the authors in your publication Lost Coast was nominated for a Derringer Award in 2012.  Congratulations. Where can writers make submissions and reader make purchases?

That’s true. I’m fortunate to have a writer of Warren Bull’s caliber writing for Lost Coast Review. I’m seeking short stories  and poetry for the next issue of Lost Coast Review right now, so if any of the readers of this blog want to submit, please do so right away. You’ll have a good chance of getting published. Go to www.lostcoastreview.com and click on submissions and follow the instructions. Hard copies of the review can be purchased at Amazon.com or through the publisher at www.avignonpress.com
Posted by Warren Bull at 12:00 AM

Casey, am I correct that Chasing Tales is the name of the new book set in Boston? Molestation is a ripe topic in the church and other institutions considering the Penn State problem. What I don't understand is why children don't tell their parents? If my kids had a problem when they were little, they would have told me, and yet it seems that years later charges are made. Good luck with the book, Casey!

I credit/blame Casey for convincing me to submit my writing for publication. But don't hold him responsible for the end result.

Welcome, Casey. And we do thank you for convincing Warren to submit his work so we'd all have the chance to read it.

Elaine, molesters choose children who are vulnerable and often threaten them with being taken away from their families or even death to their families if they tell. A priest can also threaten excommunication or damnation, and to a small child from a devout family that's a terrible threat. They also tell the children that no one will believe them and that it is their fault because they are bad and everyone they tell will know that they are bad. Can you begin to see why a small child might not tell?

Always interesting to be introduced the another author.
Wishing you great success with the new novel.

An interesting interview, Warren, and Casey your newest book is quite timely. I think it will do well.