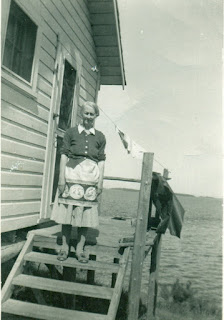 The word grandma brings a mental picture of a slightly plump, beaming, older woman lavish with her hugs. That grandma loved to cook big meals for her family when they came to visit. That was probably like my father's mother, but my only memory of her is when my dad picked me up so I could see her lying in her coffin in front of the baby grand piano in the parlor.

The grandma I remember so fondly is my Grandma Jones, who lived on the farm across the road from us. She was a tiny thin woman who didn't weigh much more than a hundred pounds if that. Her cooking was minimal and her meals often consisted of a donut and coffee for breakfast, and if she came to eat at our house for dinner; a teaspoon of peas, a tiny sliver of chicken and a small spoonful of mashed potatoes. She didn't bake or fry chicken; she boiled it. When she made lemon cookies for the grandkids, who hung around the farm all summer, they were burnt on the bottom and had big chunks of lemon rinds in them. That was probably why Grandpa had Nickel's Bakery deliver donuts and other pastries several times a week, but he was lucky if he got any of them because often as not Grandma let the grandkids eat them.

Grandma was one of five sisters. She once told me she was the ugly one, but I don't believe it because Grandpa was quite a handsome young man, the only son of a prosperous farmer. He had his own buggy with the fastest black horse in the area, and he came courting her. She was a teacher in a rural one room school house at the time. When they married, Grandpa's father gave them a farm. They had four children and Grandpa gave the oldest son and his wife a lot next to his farm, and he gave my mom and dad a lot adjacent to a large tract of land he owned across from his farm. Another aunt and uncle already had a home just down the road from us, and the youngest settled in Cleveland near his job.  So you can see they always had lots of grandchildren (eleven while I was growing up) playing in the barn, in the fields and woods, up in the attic or just hanging around on the large screened porch. I can't remember Grandma ever scolding us. Sometimes Grandpa got a little upset, but never Grandma. If we needed some spending money, Grandma went through the pockets of his pants hanging in the bedroom for change for us. She called him the Old Poop Deck and loved putting one over on him.

In the summers, Grandma would walk back the long lane to the woods with a small coffee pot of water. She'd build a small fire and put the water on to boil and make coffee. I never went with her, but my brother, Jerry. did sometimes, and he said she kept a small cast iron skillet back there hanging from a nail on a tree and she'd fry an egg. When she was done with her simple meal, she'd empty the coffee and grounds and use the pot to pick blackberries for a pie. Yes, those pies had soggy bottoms, but that didn't stop the grandkids from enjoying them. On her walks she always stared at the ground as she walked, and it was amazing how many four leaf clovers she could find.

Grandma liked to fish, too. Not in a boat, but on the bank of a river north of where we lived or on the dock of a lake in Canada where they went on a vacation sometimes. She could sit for hours even with the mosquitoes biting. That's why I didn't go with them very often.

Grandpa bought a TV before anyone else in our family had one so we grandkids sometimes filled the room where it was kept. I can remember Grandma's fascination with it. Once she was so excited about some cancan dancers she'd seen the night before, she demonstrated by kicking up her heels and flipping up her cotton dress and exposing the rather long cotton underpants she wore. She was laughing all the while she danced.

She was afraid of nothing. Once when Grandpa had gone on a fishing trip to Canada with some male friends, a peeking Tom came on the porch one night and was looking in. She grabbed a broom and chased him off. Another time when a neighbor woman had a mental breakdown and came over with a large knife to get her, she and my brother, Jerry, headed for the basement to hide while the woman was trying to break the door down and broke a window. Grandma was giggling the whole time in the basement with Jerry. He said he was scared, but Grandma wasn't. The woman finally gave up and went home.

Whenever my siblings or cousins get together often Grandma is discussed. We have so many fond memories of her and share many laughs about those memories. No, Grandma was not your typical grandmother, but she was special.

The only grandmother I knew had been a flapper during the 1920s. She smoked, drank, cursed and loved Charles Dickens. She had been a school teacher having gone to a "Normal" school. Hate to admit it, but I'm a lot more like her than I used to think I was. Of course, except for facial features, physically we're nothing alike. But I have to laugh now. I wasn't sure I knew her well when she lived. Now that she's dead, I think I know her better.

My favorite week during the summer was when I spent the week at my grandparent's farm by myself. My second favorite was when my older brother was there and not at home. Grandma baked fresh bread and churned fresh butters. Certain smells bring back great memories.

E.B. She sounds delightful. I was startled one morning when I glanced in the mirror and saw my grandma's face. Thankfully, I haven't seen it since. :-)

I think I've picked up from her an appreciation for the simple life without glitter and glitz.

Your grandmother sounds like a more traditional one than mine. It's funny how smells bring back memories. I think I love lilacs because they bloomed next to the farmhouse.

Most of my cousins and siblings congregated at my grandparents farm, especially in the summer, although we also ice skated on the pond and went down the small hill next to the house on sleds in the winter.

I was blessed enough to know both of my grandmothers. One fit the stereotype you mention, Gloria. She was a minister's wife, a great cook and baker, and she taught me how to do fine hand sewing and quilting. The other grandmother was Cherokee. She was a basket weaver, though not as good as her mother had been. She harvested wild herbs and food plants and grew other herbs. She was a great storyteller. Like a lot of Cherokee, she was both a Christian and a believer in the old traditional Cherokee spirituality.

Both women kept chickens and had large gardens, canned and pickled in late summer. One was married to the same minister all her life, and the other was married thirteen times to ten different men. They had two very different outlooks on life. The one was a conservative conformist, always worried about what people would think, an important thing to minister's wives. The other was pretty much the opposite--she told me you have to have your own inner compass and stay true to that, no matter what others think or want of you. Both were important to me in different ways, but my Cherokee Gran was the one who played the biggest role in forming me.

I never knew any of my grandparents, all gone before I was born. I only got pictures of my grandmothers way late in life. One may be the only picture ever taken of her. The other, she had portaits taken in her rather short life. Neither were educated.
Patg

Linda, what rich memories you have of two people very important in your life. Your Cherokee grandma sounds like a rich character you could use in a book. Have you done that yet?

I think most women who lived in rural areas had large gardens in those days. I'm not sure if it was from our grandparents or our parents, but every one of my five siblings and I garden to some extent although only three of us plant vegetable gardens.

Even though you never knew your grandparents, Pat, did you have any aunts or uncles you remember?

I had a very talented uncle in many ways. After he got a degree in engineering - not sure what field - he got a job in California. After some years at it, he'd take off 6 months to golf and lie on the beach examinging his big toe, he once told me. When his money ran out, he got another job and worked until he had enough to retire for another six months. He was a real beach bum like E.B. would like to be.

I had two grandmothers whom I knew, my mother's mother had manic depressive disease, and she seemed a little crazy to me, but she was the artist (musician) so I took that from her. My father's mother had 6 children and loved all of us. She seemed stern in my childhood, but when I was older, I could talk to her about anything, and I used to love to hear her stories. She had two sets of twin boys, and neither time did she expect twins. I wrote a book about them (poetry): Grace,Sing to Me/Susannah, Teach Me to Love. Judy Hogan

Gloria, I based Skeet's Gran in EVERY LAST SECRET on my grandmother. I lost her when I was thirteen, but Skeet's Gran in the book is still going strong when Skeet's an adult.

Judy, sometimes we don't realize how much our grandparents influence us. Everyone looks to the parents, and they are important, too, but so are grandmothers.

Linda, I thought Skeet's grandmother was based on your own from things you'd mentioned before. I look forward to seeing more of her in the next books about Skeet.